This is a short series of articles, considering the most important, most resounding panels of Amsterdam Dance Event conferences. A collection of observations that span the conversation in the industry for the rest of the year, the heated discussions and knowledge that is worth a special attention. To scan through or read thoroughly, as always is your choice, but we decided no to listen through and spread the gospel.

If Djs are the new rockstars, than festivals became the new standard of a business model, where a successful formula is repeated over and over, copied and saturated until it dies out. Let me begin with reminding the Diffusion of Innovation theory, which states that every social system consists of 97,5% followers and adopters and only 2.5% innovators. A questioning mind will never die out of innovations, thus never die out of followers. That is why, for the first episode of four, we chose to highlight the conversation of the questioning minds behind Europe’s biggest festivals embracing sustainability. 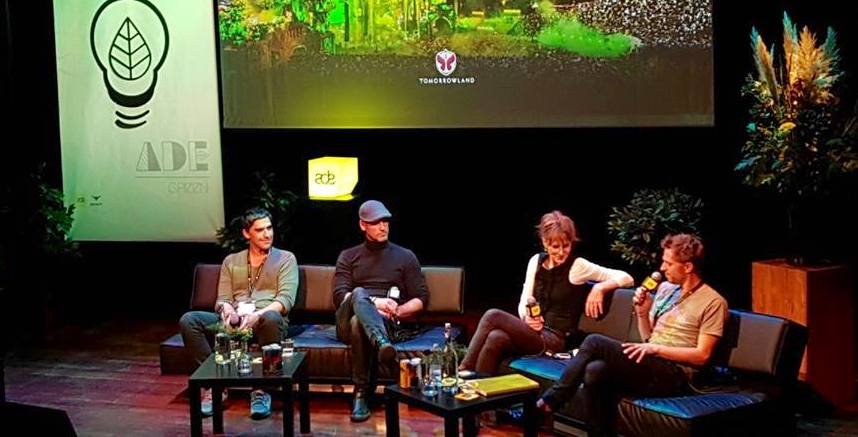 The discussion kicked off with Chris Johnson of Shambala inviting his colleagues to comment on, when is a festival sustainable? is it only burning man with their baseline of leave no trace policy? or can a festival that is working on becoming sustainable already be called a sustainable festival?

Artur pointed it’s important to redefining the notion of sustainability in broader terms of the three axioms of ecological, financial and cultural. Festival living can have broad types of inclusion: gender, special needs, all different kinds of cultural approaches that not only widen the understanding of how communities can be sustainable, but at the same time show how large groups of people can make influence in society.

“Sustainability is a lifetime achievement[…]. Either you are in it or you are not. And if you are not, probably better find another job, because more and more people will want more sustainable events all over the world.”

Joris added that each self respecting festival has to do something about sustainability, even if in accordance of their financial possibilities, every small step matters.

In Shambala the conversation is about how life can be brilliant, Chris noted. “I think people are tired of the term ‘sustainability’. People want richness of experience, diverse psychology, beautiful nature, hope. All these things are bigger than environmental sustainability.” Chris mentioned a tool that was developed in accordance to data taken from over 250 festivals in UK, which now helps measuring the ecological impact festivals are doing to the environment.

Allison stirred the conversation on inviting people into following your cause:

Artur: We need a reason to do something. In boom, we always look to the principles and the values on why are we doing things this way. We look at it as our a moral imperative, a duty to educate people, not in a top down education, but by sharing our own expertise.

Chris: In terms of an aim, having an honest humble dialogue with our audience is really working. We are doing this because we really believe in this, we would publish bad information, just as much as good information, being honest with your audience has always been rewarding.

Allison correctly pointed to the elephant in the room, which is the question of, how much does it cost to be sustainable?

Supported by Joris, Artur was direct: “Sustainability pays out only in a period of time. Once you go into sustainability, its a lifetime achievement, a lifetime mission. Either you are in it or you are not. And if you are not, probably better find another job, because more and more people will want more sustainable events all over the world.”

Fascinating case took place in Tomorrowland, where just changing the design of a bin resulted in 33 tons less garbage on the ground.

Chris told that cost wise it was a “mixed pack”. In seven years Shambala transitioned from 100% diesel to 100% renewable energy supply, improved energy efficiency, but staying true to the cause results in other costs, such as in terms of waste, where now it means more man power  for separating the waste.

How hard is to involving audiences in your mission and values?

Artur: “Communication all year round, every day and year is important. But the most important is that you show you walk the talk, otherwise there is no way for people to engage. People want to be loyal with the message. Festivals really show when you are humble, direct and transparent with your audience, they will react 100 percent times more. And then they are the oxygen of your ideas. Then they can show another world can be possible. ”

Next to staying on message and putting it in action, Artur thinks that now festivals (should) take over the role of carrying the flag of innovation in community development: “Sometimes the city, the governments or the conventional world are too much attached to the industrial goals. We, festivals, are kind of “open fields” and i think all the festival promoters should try to create their own innovations on environment because these will really extrapolate more.”

“People want to be loyal with the message. When you are humble, direct and transparent with your audience, they will react 100 percent times more and then they are the oxygen of your ideas. “

When the question from the audience pressured the speakers – should sustainable festivals stop selling animal meat?

Artur gave a far reaching answer: “In Boom we believe that the answers for the big challenges of the world is not going to be made with polarity, of this is right and this is wrong, its going to be the fusion of them both. For sure, the conventional agriculture is horrible, the way animals are being fed is horrible, but probably there are technologies that can improve the organic farming.

He then provocatively asks, what is better? that you eat the meat from the local farmer, or tomatoes full of chemicals, grown in green houses in the south of Spain? He explains that one of the aspects of sustainability is show the tools for people to take their own decisions. What are your visions and plans for the future?

Chris: For us it all started with a good party and only somewhere along the way we started to think we could make the world a better place.

However the next focus of Shambala is indeed ambitious: looking at alternative currencies, at how to become a festival without money by doing things radically differently without going bankrupt. He notes: “The fact that governments and banking sectors, we all know know its not going to be the framework we all need to move towards sustainable world. It’s proved its not working and we want to move out of that relationship.

Artur: Transferring the sense of community to organisations, external factors, that’s what festivals in many ways are bringing back. Our redefinition if the definition of community is at the forefront, epicentre for the future and for the present.

No matter if its religious or music or arts, festivals will keep having an impact in the social world. And if we have a basis of community then we can have a successful redefinition of festival culture that can have a positive impact for the society as a whole.