Have you ever thought you had the greatest idea for a festival concept and were confident you could execute it to the max? Well, Amsterdam Festival Event makes those dream reality.

On August 8 this new approach to festivals will come to Amsterdam. The Amsterdam Festival Event can be described as a BYOF, Bring Your Own Festival, concept. It’s gonna be one weekend, one outdoor area and 60 party tents. Until June 7, you can submit your crazy ideas and a jury will decide weather your idea passes the selection process. The ideas which get selected will get a sound system and a party tent. Out of all those events, the ones which sell the most tickets will get upgrades such as drink tickets, larger tents and even full on festival-style stages.

All you have to do is send your idea to the Amsterdam Festival Event Facebook Page; think about an extraordinary name, write a short description of your idea and maybe attach a crazy visualisation. Try to be as creative and alluring as possible and you’re festival just might make it on the list.

So far the organisers have confirmed 6 festivals, so there are 54 festival slots to go. The 6 ideas that made it so far are Brabanders in Amsterdam-Festival, Raymond van Mil-Festival, Knuffelrock-Festival, Opblaasdieren-Festival, Repeat Repeat Festival Festival-Festival and the Aussie-waussie-Italodico-Festival.

Now it’s your turn. Sit down, think about the festival you always wanted to attend and try your luck! 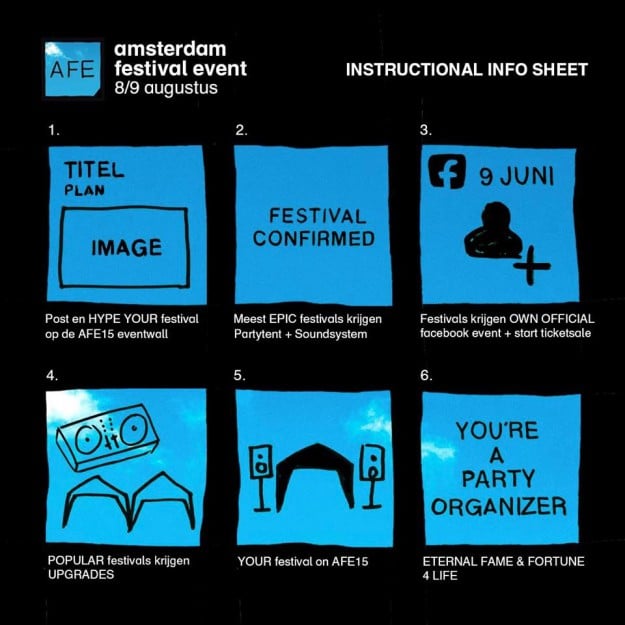