From new ways to collaborate via Ableton Live to remixing the relationship between emotion and music, we take a look at some of December’s best electronic music-related apps.

Most applications come in iOS versions, unless otherwise specified. Did we miss any? Let us know what your favourite apps from the past month were, and what are you looking forward to in 2016. 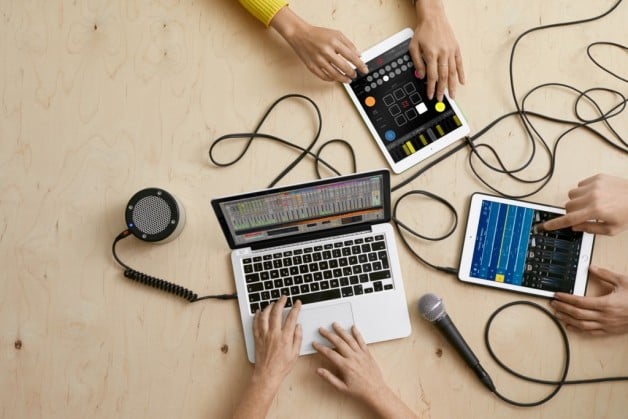 In November, Ableton released its Beta version of the new collaborative music production network Link, and in December the first range of Link compatible apps have been released. Link is a technology that keeps devices in time over a wireless network, so you their is no hassle of setting up, rather shifting focus to immediately creating. Amongst the apps that are Link compatible are Loopy, Patterning, Audiobus and Electribe, with more in the works

Last year, Auxy debuted to universal acclaim. In 2015, the team behind the successful (and minimalist) synth app, then for, iPad redesigned the entire thing from the ground up, adding a new synthesis engine, and a master chain for FX. The latest version of Auxy includes iPhone support and layout of the Auxy interface, New synth engine, Sounds designed by producer 7 Skies, Master effects chain specifically tuned for the sounds in the app, and 3D Touch support allowing faster loop editing and project creation. By removing unnecessary distractions it lets you focus on your musical ideas and be more creative.

The KORG DS-10 series was an enormous hit for the Nintendo DS some seven years ago. Now, it has undergone an evolution, making it available as the KORG iDS-10, a portable synthesizer studio for iPhone. The KORG iDS-10 combines a cutting-edge analog synthesizer, voice synthesizer, and analog drum machine inspired by motifs from the original KORG DS-10. This iPhone app gives you a hand-held system to easily create electronic music, which requires persuasive sound with a minimal number of notes.

Noise is a powerful instrument with a unique playing surface, taking full advantage of the iPhone 6S’s 3D Touch capability. Users can enjoy powerful, multidimensional sounds on-screen or use it as a portable sound engine for their favorite MIDI controller. Laid out like a piano keyboard from the future with a continuous set of “keywaves,” users can strike, press into, glide left and right, slide up and down, and lift off to create unique sonic effects.

Maybe not an app, per se, but something fun to waste time at work with and make some cool audio/visual remixes. Red Bull Music Academy’s Mixing Board is a web experience highlighting the link between music and human emotion. As you play with each song, the selected videos correspond to the change in mood. Variations in tempo and feeling affect our physical and emotional response to music. Featuring tracks from the likes of Falty DL, Nightwave, Kuedo, and more, and visuals taken from all kinds of interesting films, commercials, television shows, and niche media.