With over 110 artists spread over 8 stages, Awakenings Festival once again becomes the largest outdoor techno festival in the world.

Over the 24-25 June weekend, recreational area Spaarnwoude Houtrak will be dedicated to Techno in all its diversity. Amongst the massive lineup announced for this 20th anniversary edition will be a new live show from Paul Kalkbrenner, the reunited Wihgnomy Brothers, Sven Vath, Ricardo Villalabos, Maceo Plex, Chris Liebing, Joseph Capriati, Dave Clarke, Tale of Us, Loco Dice, Floorplan, Weval, The Black Madonna, Black Coffee, Len Faki and KiNK, as well as Sunday stage hosts Joris Voorn and Adam Beyer.

The full lineup is too big to include everything here but you know what the Awakenings brand is all about! Tickets go on sale TODAY! 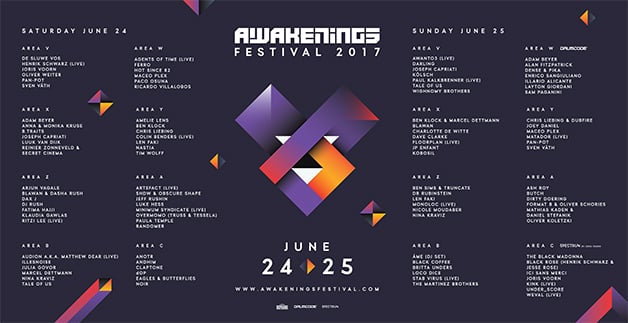