When the idea of making a ‘Balance CD proper’ was suggested to me I was filled with dread. I was of course excited and grateful to be given the amazing opportunity, but I immediately felt this enormous pressure that it needed to be something special. It had been so long since I’d put anything out that I was pretty daunted by the prospect, especially given some of the mixes Balance have been responsible for putting out, many of them considered classics.

Still, at least I would have plenty time to make it, with a deadline that seemed to me to be a forever away. Unfortunately, I didn’t foresee the many obstacles that would see me miss deadline after another after another.

Last year I isolated myself slightly, I also became sick with a mystery illness that I now believe was in some part stress related; it wasn’t the greatest time around my way for a number of reasons. Of course, people face much worse hardships every day.

I worked on the mix on and off throughout most of the year, picking it up and putting it down many times as things got in the way of it. At times making this project was a truly joyous and cathartic experience, whilst at others it was like pulling teeth and it felt like the last thing on earth I wanted to be doing. I would say to myself ‘it’s just a fucking mixtape, I need to get a grip’ but I’d built it up into this huge thing in my head. One mix compilation was never going to make or break my DJ career.

What could’ve been a straight-forward mix compilation, with 12 or so tracks per disc nicely mixed together became this immersive monster that I would go and get lost in.

I set out to create these ‘magic mix moments’ throughout the compilation. Where tracks would harmonise and layer in such a way that they’d make your hair stand on end. Where tracks would somehow sing to one another. When you’re DJing, you often stumble across these by chance, but I purposefully went hunting for them. I would sit for hours colliding the many tracks I’d collected into each other.

I got so carried away with this that I’d ended up with slightly too many of these moments and a tough part was saying goodbye to some of them. Then came the challenge of fitting them all together in a cohesive way that made sense. I didn’t just want a series of mashups back to back, the mix had to make sense and flow as whole piece. At times it felt like putting together an impossible puzzle.

Unfortunately, spending a load of time on something allows for more self-doubt to creep in. I know from experience that just because I’ve spent a long-time toiling over something, it doesn’t necessarily mean it’s going to be any good. When I was putting this together I kept questioning, ‘Was there even an audience or an appetite for this kind of thing? Am I wasting my time doing this?’ 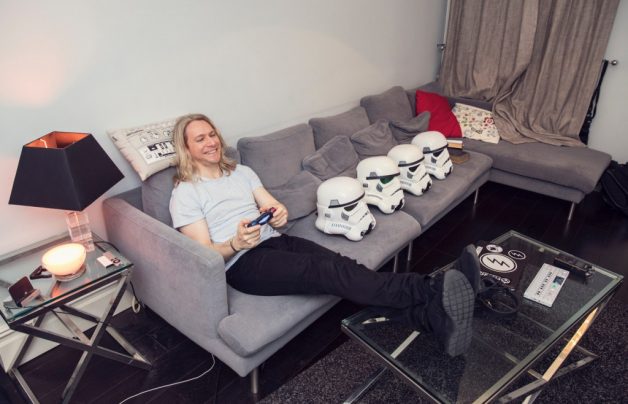 Second guessing plagued making this mix and I would go to bed some nights in a blind panic about it all. At points I’m sure I entered a kind of psychosis with it. I would stay up all night pondering whether a certain track should be on the mix or working at a macro level on some totally unimportant technical detail changing my mind about it over and over. It became an unhealthy obsession. I remember when I’d completed the first part and listening back to it having ended it with ‘Vines’, my uplifting song I made about life unravelling, I genuinely believed I may have made my most depressing mixtape to date and wondered if anyone could possibly enjoy it. Although I must say – I had some fun mashing up and concealing my vocals giving them the ye old glitching tape deck effect that matched stylistically with AAAA’s equally wonkified ‘Jazz D’ before cutting Architectural’s ‘Cubisimo 8.2’ abruptly short as the tape ‘runs out’. Did I mention that I overthought this mix?

I’m still impressed that Balance was able to license so many of the tracks without resistance. It’s the most freedom I’ve had making a commercial mix.

I think I handed in three versions of ‘Act Two’. I’d be convinced that it was finished only to completely change my mind about it three days later. “Stop the Press! Destroy the promos” Dan (aka Danny Bonnici), the poor mastering guy was rightfully fed up with me and I was no doubt stressing out Tom at the label, not that you’d know it. I’m just thankful Balance is an Australian record label – so laid back! I’m pretty sure Balance number 30 should be out by now, and it’s my fault that it isn’t.

During the time that I’d blocked out from travelling to actually construct the mix I was still hunting for music, I was far behind and didn’t start it until the midst of a month long packed tour. I figured I just wouldn’t sleep as much and I’d be able to do both the gigs and complete the mix. Easy. For a little while I was okay, overloading on Berocca and coffee, grabbing a few minutes here and there on planes, trains, in the back of taxi’s and even in glamorous locations such as Woking train station. 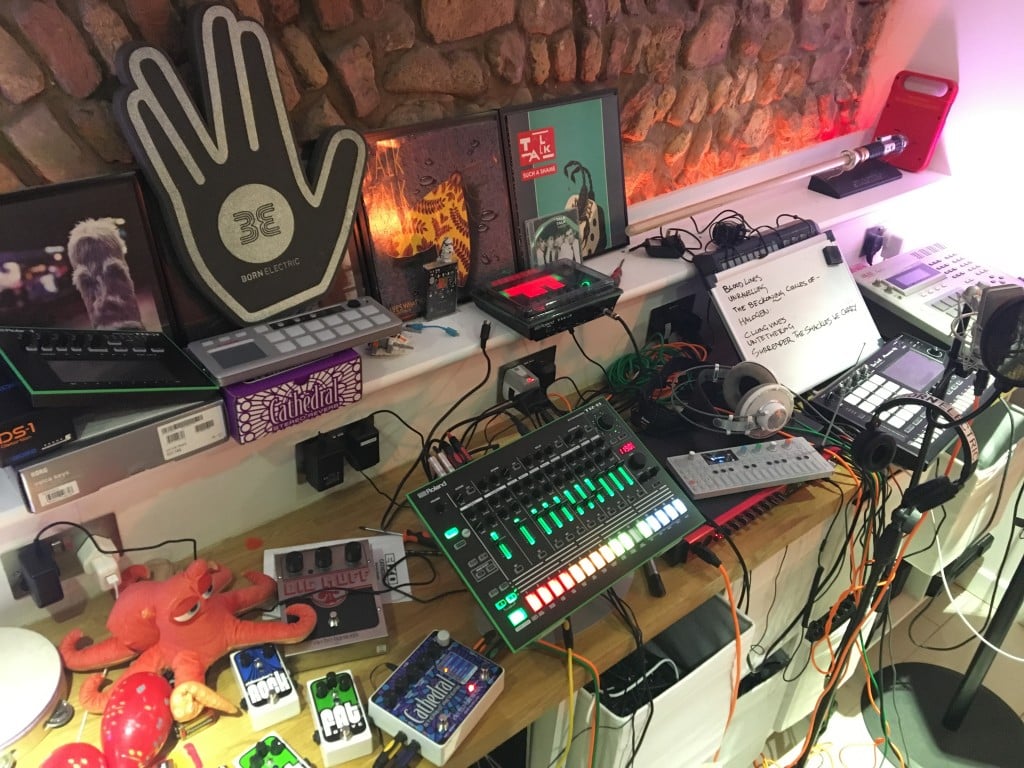 Trying to do everything at once was a mistake. I spent the night in Buenos Aires airport after missing a flight due to being half asleep at the airport, subsequently letting a lot of people down in Lima. I felt like I was failing on all levels. I figured, as a fitting penance I wouldn’t get a hotel and decided to find a ‘cosy’ spot in the airport and pulled an all-nighter to work on the mix. It was then I started to get this mystery illness, which when you’re travelling around South America alone with access to Web MD on your smartphone just isn’t the one.

I had to put the mix down and forget about it for a while and concentrate on looking after myself. I quite literally sent Balance a sick note (in Spanish). In order to get the mix over line I took out coffee and swapped it for Camomile Tea for the next three months.

Once the mix was finally finished and I had an inkling that I was on some level satisfied with it, I then began to have fun with all the other elements that came along with putting out a properly licensed mix compilation. Upon previewing the first mix my friend said to me, “I really can’t tell where one song ends and another begins”, which was meant as compliment, but my ego wanted people to know just how much work I’d put into this mix and so the mix graphic was born.

Working with Stefan Nott the ace graphic designer who was responsible for the art, we made this mix guide timeline thing. A graphic to show just how everything was put together. It wasn’t just about showing off, I remember being so fascinated when Sasha and Digweed had one printed inside the sleeve of their first “Northern Exposure” mix. I used to stand in my bedroom at my decks trying to copy their mixes and tracing my finger along the guide listening intently. I figured maybe some people may find something like this interesting as well. 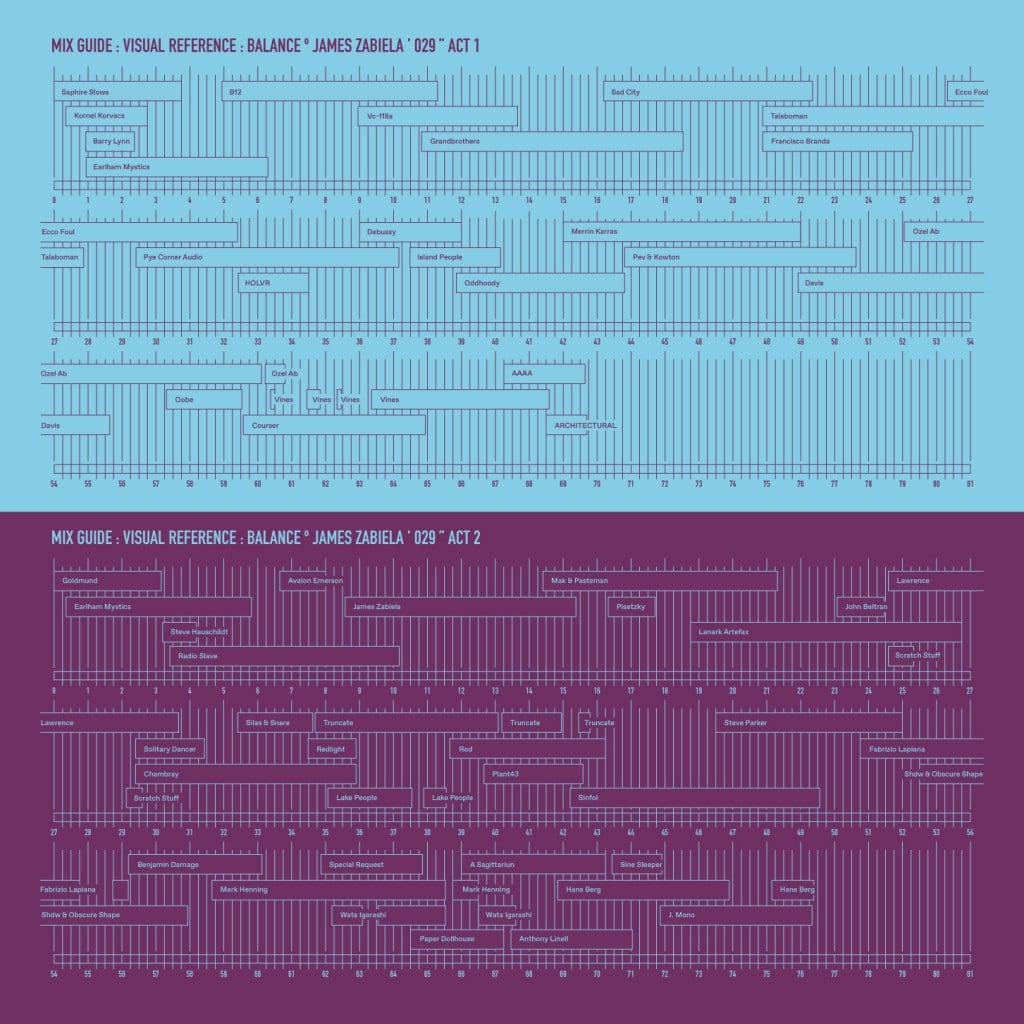 I’ve been trying, unsuccessfully, to avoid reading reviews of the mix because I didn’t want my own opinion of it to be coloured by someone else’s – I’ve been in a nice place with it pre-release. I went to see Sasha’s live show in London the other week and a couple of people came up to me and told me how much they’ve been enjoying the mix. I found myself not knowing how to respond to their generous compliments because I’ve had such a weird relationship to the project. The fact that people appear to like it is of huge relief!

Now it’s all completed and out there, I’ve caught myself walking past the mirror in my living room to find I’m not frowning for a change. I’m currently celebrating by slobbing it around at home in my pants playing Starwars Battlefront II online. I’ve only just unlocked the reduced recoil for the CR2 blaster so it’s still early days. Pew pew pew!

“Balance 029” mixed by James Zabiela is out now. BUY 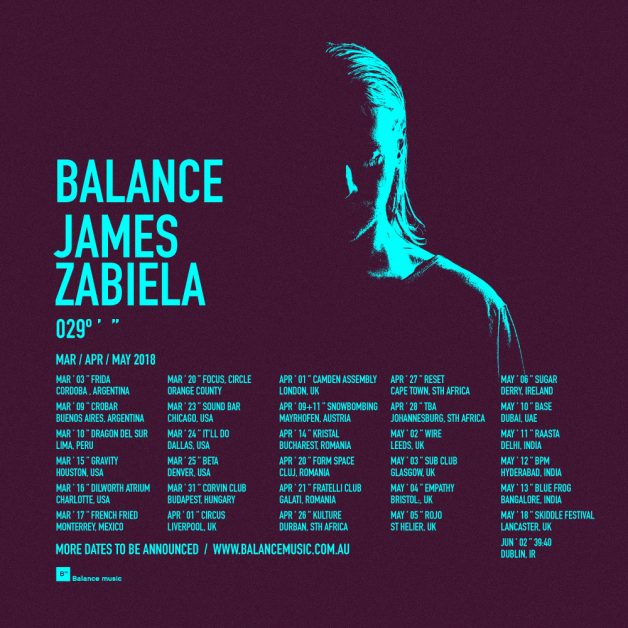