After the success of Solomun’s Shakespearean tragedy (and the amount of fun we had writing it), we started wondering what we could tackle next, and Kaytranada’s Montreal session came up almost immediately. Sure it doesn’t have anywhere near the views that Solomun’s video does and it’s less than half the length but it is packed with content. It also doesn’t have the tragic story line..

Kaytranada’s Boiler Room, in many ways, is a comedy, a Divine Comedy, full of eccentric characters and unlikely events. If we ever doubted it was the one to do, Reflec Shun confirmed it for us in the comments; “All the characters in this piece belongs in a script…My Damn! Kaytranada doing his thang though…”.

Once again some people make the valid argument that we should get a life and go outside, like Ike Haze

who asks; “Why would I sit at home and watch other people having a party. I don’t understand the purpose of these videos!?!” But still it’s hard to not become gripped after watching a few minutes and actually the more you watch, the more fulfilment you get. Imaginatively named YouTuber fuck would agree; ”I swear this is like moving painting. it’s beautiful”.

Nick Taylor simply comments “I know I’m on drugs, but this is one of the best things I’ve ever seen. I’ve watched it about 5 times. There is ALWAYS something slightly odd going on.” To some extent, this could be said of every Boiler Room session but this one particular seems to be overflowing with eccentrics in various altered states, even the groups of jocks with their beer staffs who barely feature are still eye catching and lead you to ask the question; what the hell kind of party is this? 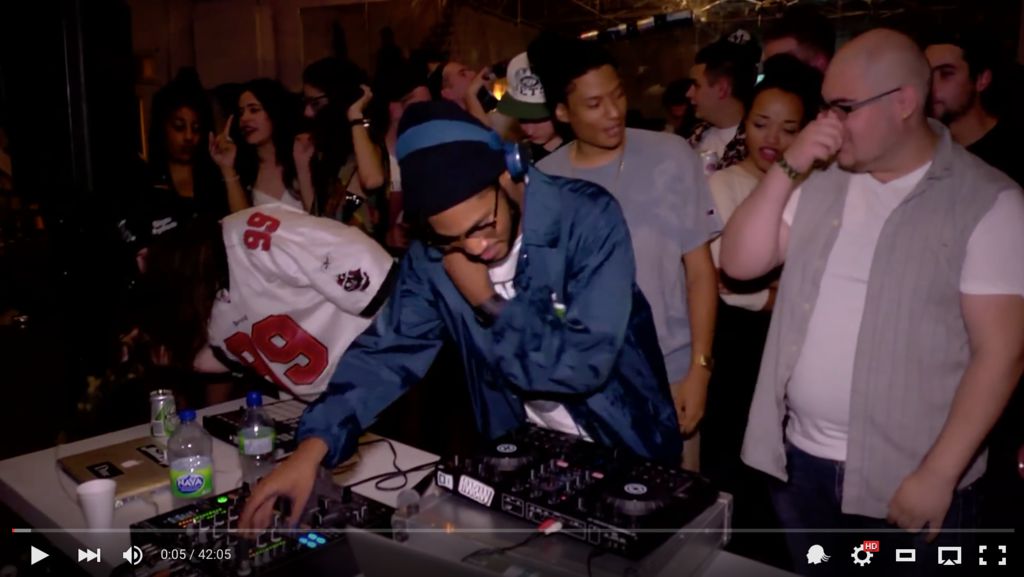 And we’re off! One of the first things we notice here is Anthony Fantano / Fat Joe (we can’t decide what to call him, neither can YouTube) having a good old touch of his nose. This will become a running theme throughout the forty-odd minutes as Placeb0 notes; “dude keeps touching his chin and nose, makes me touch my chin and nose…. sooner or later you’re touching.. CHINNOSE”.

We first get the pleasure of meeting Tall Girl who takes no time to get in to some spirited dance moves. A few seconds on at 1.14 Kaytanada tries to tell her something but she is already so into the moves she doesn’t even register. This character has some admirers but largely is hated on throughout. Vilmos Magyar is one such admirer who comments; “I liked the tall chick with hipster glasses, she was a little self conscious but it was cute” to which Daniel Roth responds “You’re on your own, kid.”

“i dont see how thats an issue for me” Vilmos responds. 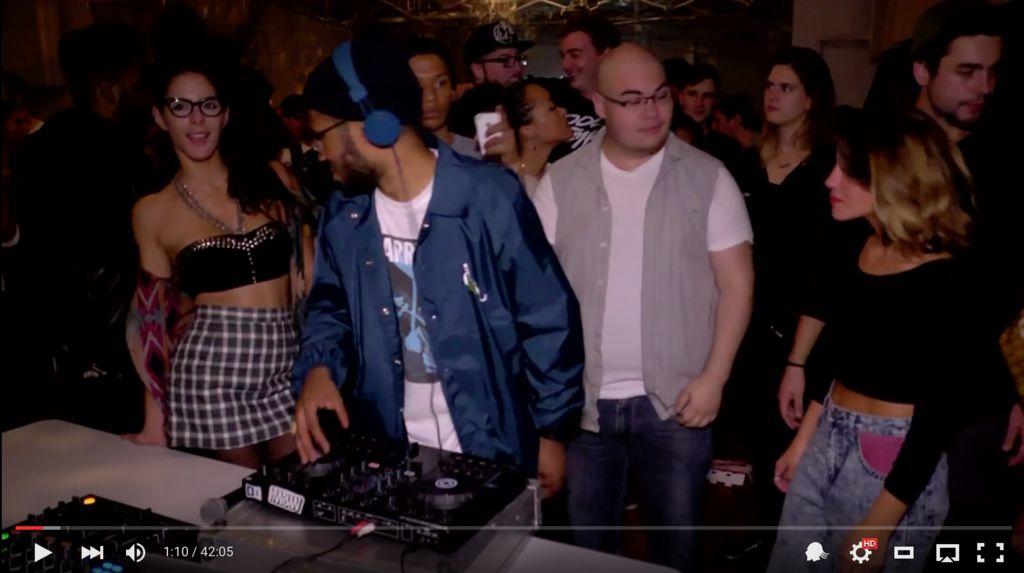 For a relatively short runtime, this session really packs a lot in. So much so that it requires several re-watches to spot everything. On first viewing Tall Girl captures the viewers undivided attention in the first minutes. It’s easy to miss what happens on the other side of the screen. However, our good friend fuck spots it; “Everytime I watch this I find another new weird fuckin moment. Like 1:10 dude on the right just getting BTFO”. On the right we see the girl in question, who we will call Back The Fuck Off girl (or BTFO) getting hit on from behind, twice, unsuccessfully by Casanova, our hilariously unsuccessful womaniser.

The final climax of the BTFO moment comes but this still doesn’t seem to work as Casanova keeps on trying to work his magic by shouting at the back of BTFO’s head, such a romantic. 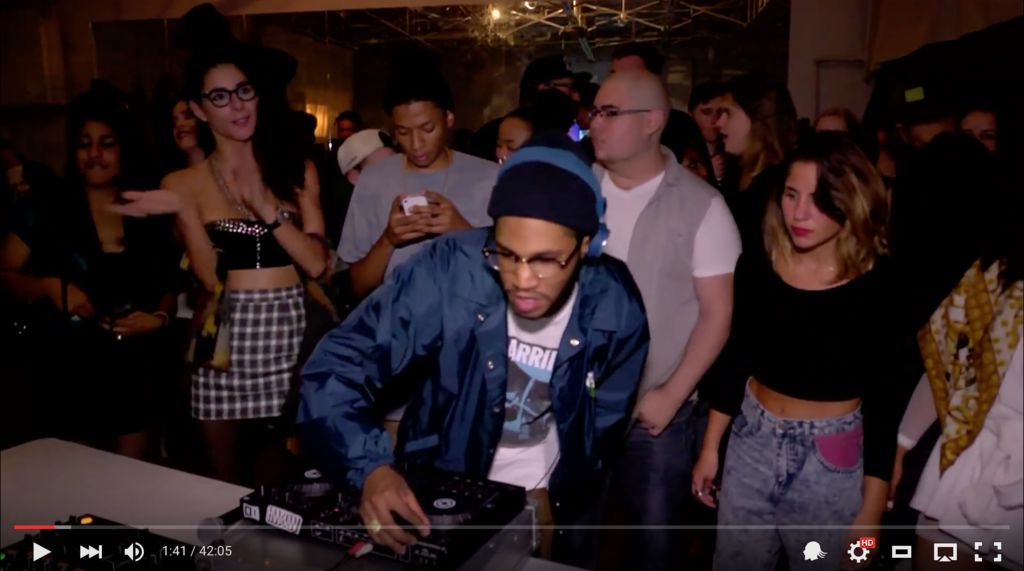 Tall Girl’s dancing gets even more intense and she appears to be talking to herself at the same time. We can only wonder what her soliloquy is as it is drowned out by Kay’s beats. Johnny Docs notes; “tall white girl can’t dance for shit XD” to which artparty92 retorts; “lol it’s not about colour man. none of these goofs can dance.”

Hi Top has a good thorough clean of his afro flicking any lose bits of hair or skin flakes onto Kaytranada’s equipment. 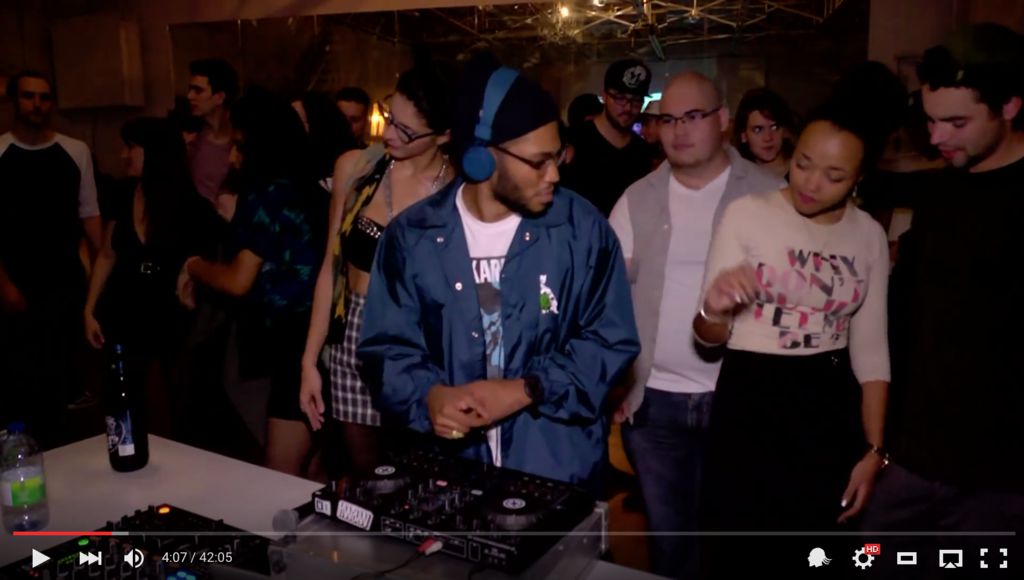 Shay Lia arrives and Casanova thinks about trying his magic on her. Before he gets a chance to try it she makes a move out of range. Perhaps he spots the slogan on her t-shirt. 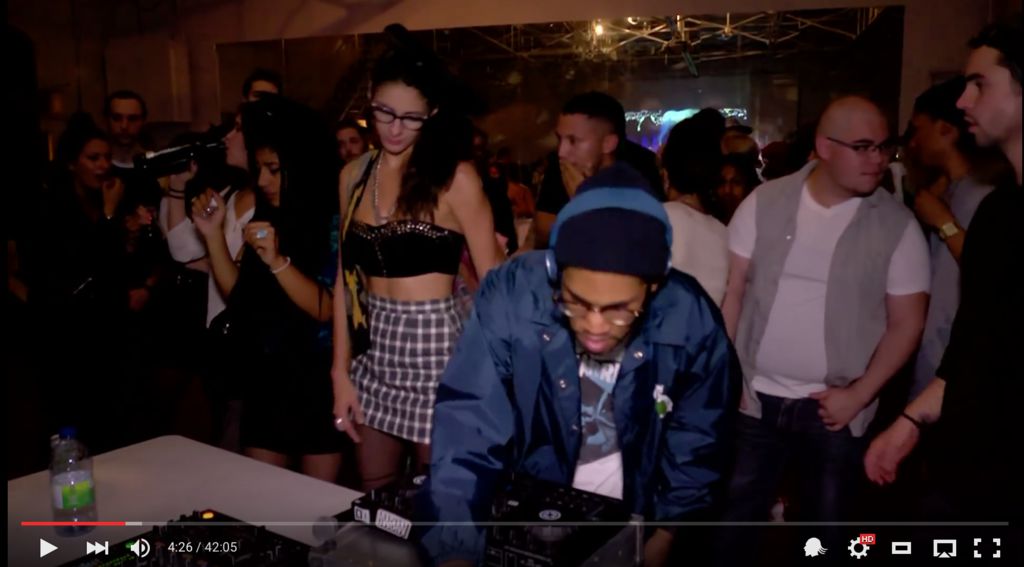 At first it seems like Casanova’s moves have worked but it quickly becomes evident that Tall Girl is more concerned with striking another pose. 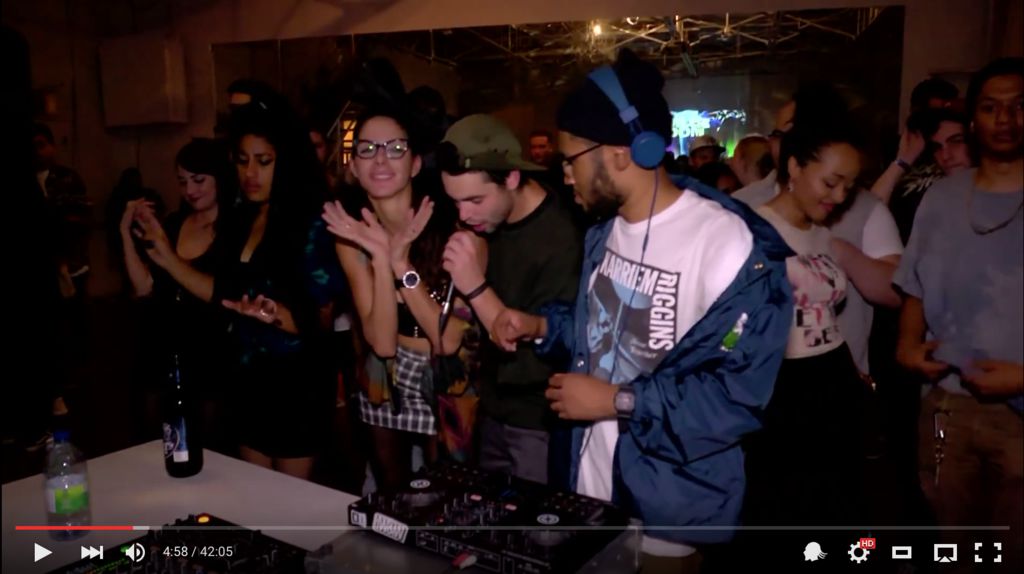 Again unlike Solomun’s narrative, Kaytranada’s story is already in full swing before the five minute mark. Here in a shocking moment, Casanova reaches across the desk and tries to bust a freestyle to impress Tall Girl. Thankfully the mic is off and Kay wastes no time shutting him down, pushes the entire crowd back and reinforces his authority by taking his jacket off. You get the sense that Kay already knows this is an unruly rabble he is dealing with and a strong arm is needed. Anthony Fantano / Fat Joe then leans in to commend Kay for doing the right thing. 112hidde112 can hardly believe Casanova’s audacity; “+fuck at 5:35 hes getting the GTFO again XD” 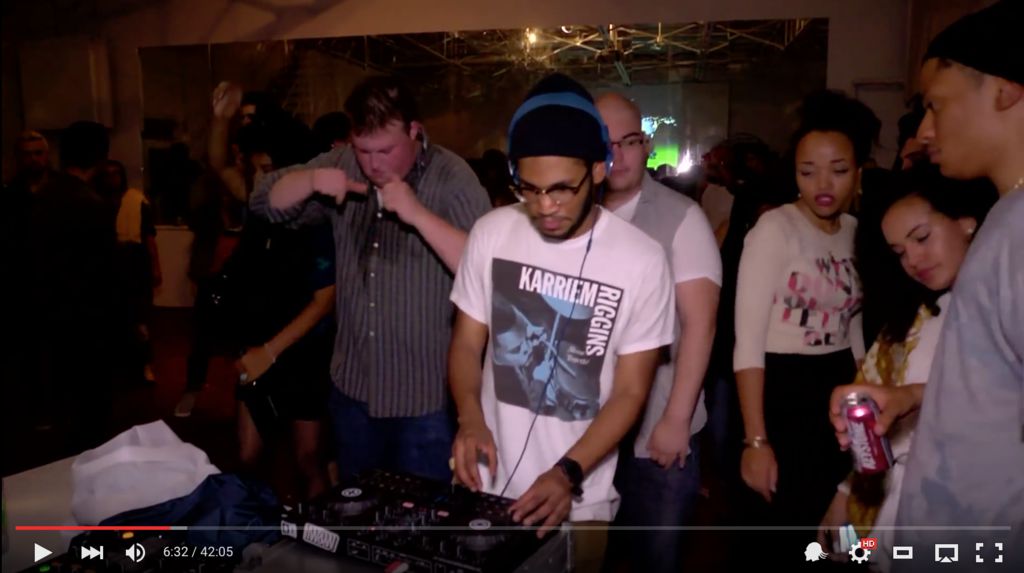 Just as we are in need of some light relief, Sweatman arrives with some killer sweaty dance moves. If anyone could prove artparty92 wrong about no one at the party being able to dance, this is the guy to do it.

Anthony Fantano / Fat Joe touches his nose. Again. If you thought our breakdowns go in depth, NOORTJEize actually took the time to go through and count each nose touch; “92 times he touched his freaking nose stop it !!!” If this figure is correct, thats over 2 nose touches per minute average. 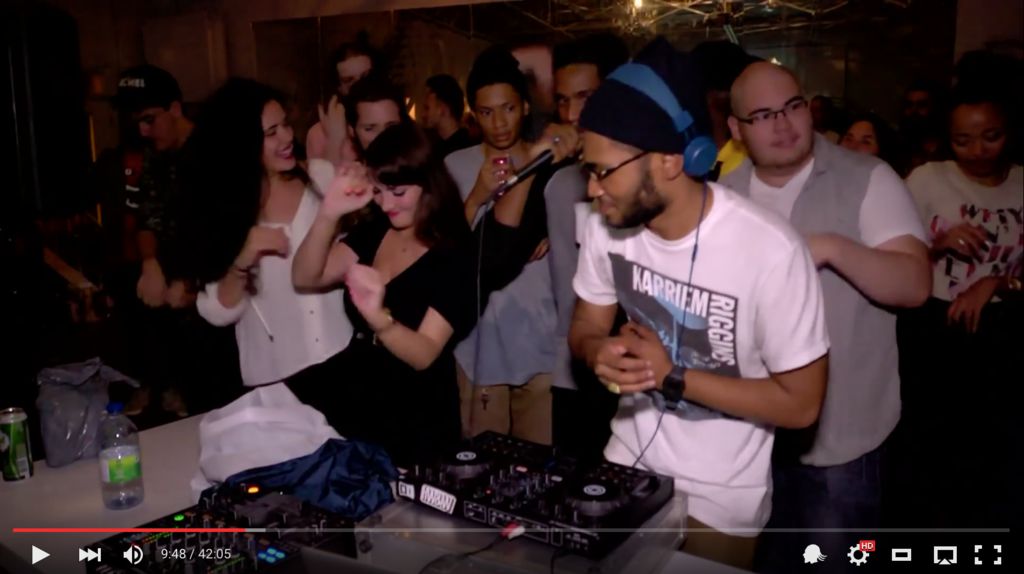 A new comer picks up the mic. This time round it seems to go down a lot better, despite the fact the man only says four variations on the phrase “Montreal I wanna see you skank.” Shortly after Kay drops his track “At All” and things get really nuts. 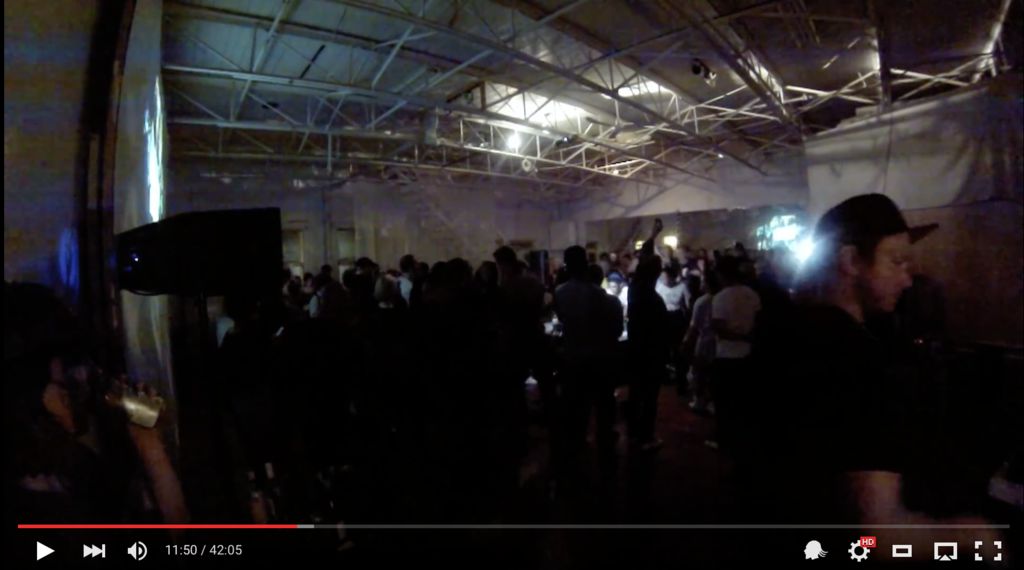 We’re briefly treated to a different shot where we see the goings on from a distance. Here we get a chance to take a step back and gaze in awe at the ridiculousness of the situation.

Minutes later some dude with a beer staff appears to be going deaf. 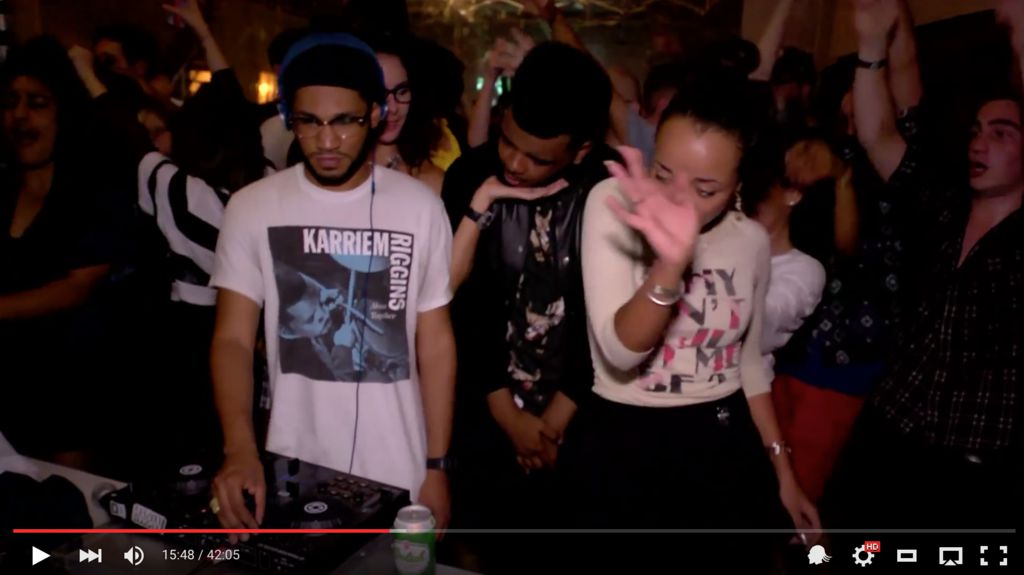 Kaytranada drops his edit of Teedra Moses – Be Your Girl. By this point Shay Lia has returned and gets stuck in to some very jerky dance moves which garner varied responses down in the comments. ToxicSpiker notes; “mixed race girl rolling in the front lost 2 liters of sweat and burned about a million calories in one night. props”. whilst brian b theorises; “insane moves but there’s gotta be a damn puddle around her”. By contrast Jesus Guillen says; “no one was in touch with the beat of the music. lol” We can only assume the video is actually out of sync but there could also be another factor as Flecken zu dem Kautz notices; “soooo many people on MDMA 😀 Nice”.