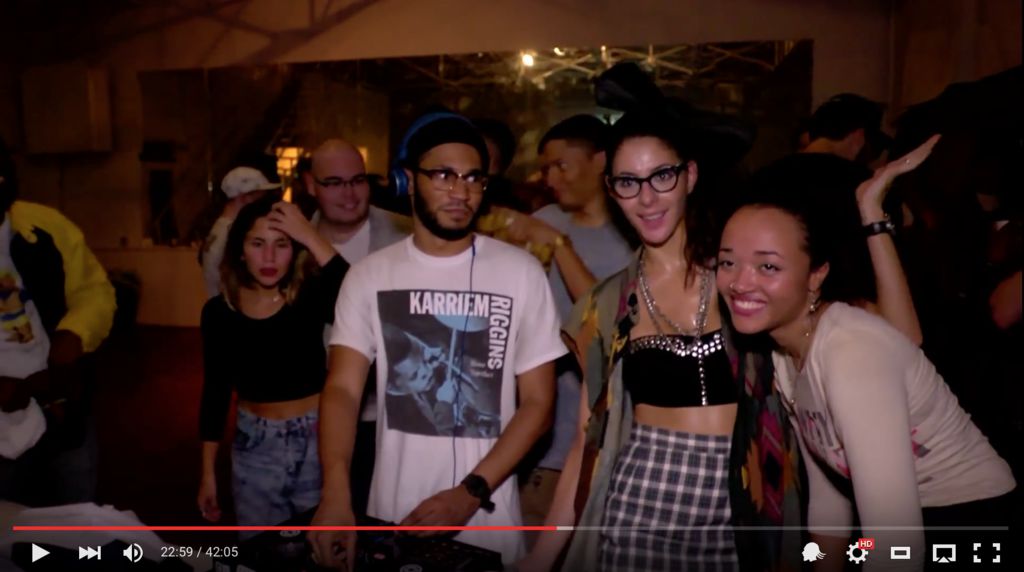 Tall Girl comes back in for a picture. Whoever has this particular photo is in possession of a masterpiece which sums up the entire evening. Kaytranada’s facial expression does most of the talking but also if you look just behind Kay, you see GTFO also looking like she can’t take any more and the two guys further behind also looking severely awkward. Its almost as though everyone has realised how ridiculous they all look, apart from Tall Girl of course and Shay Lia in the foreground who makes light of the situation. 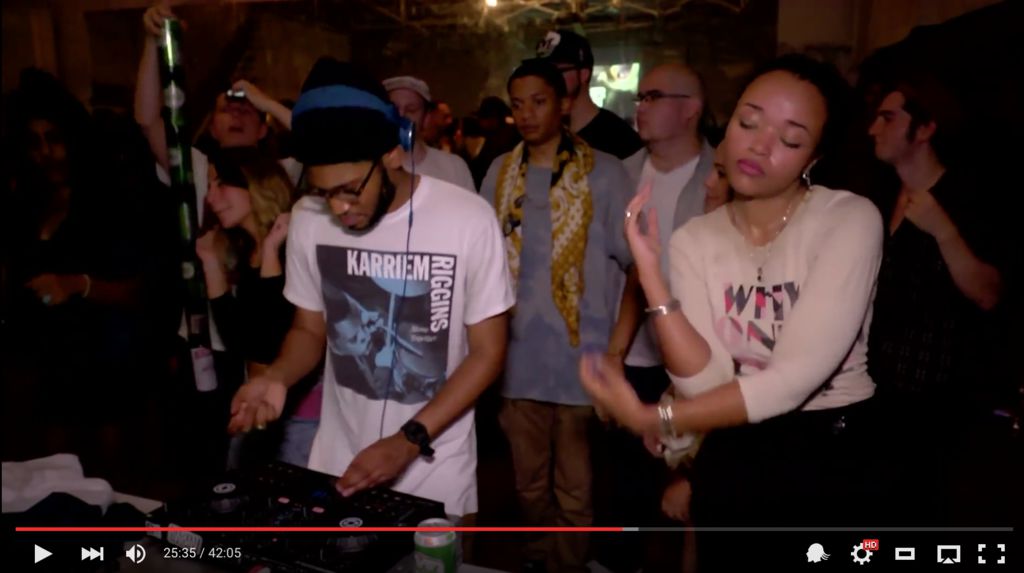 One of the beer staff guys seems to be up to something as TheAris621 notes; “25:35 What the hell is that guy on the left doing with his phone….” This is just one small inconsequential moment but the question of what the man is actually doing sparks some interesting theories. Isaac G suggests to TheAris621 that he may in fact be “texting your mum”. Ian Loomis is far more down to earth about it; “I mean the dudes got a beer staff so that should be all the info you need”, whilst Val Amon enlightens us with some helpful information that may explain it; “when your on heavy drugs putting a vibrator near your eyes will give you very unique visions”. Thanks for that one Val! 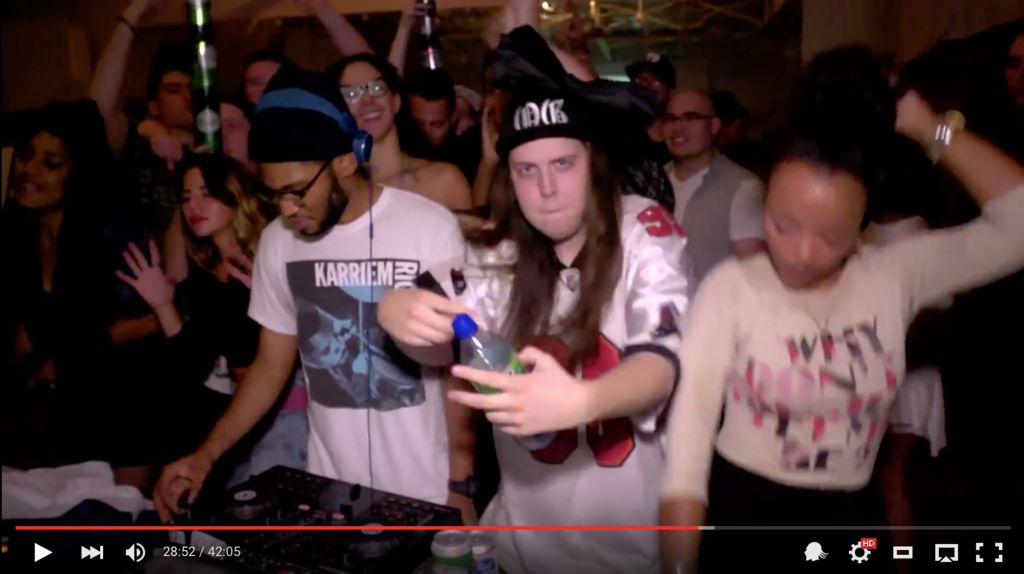 Tommy Kruise arrives and shakes up the party. This seems to be his only purpose in the plot line but his arrival is always welcome. vincent leahey6

doesn’t think Tommy gets enough credit for his role; “how has nobody commented about that troll of a thing that showed up and touched people??” 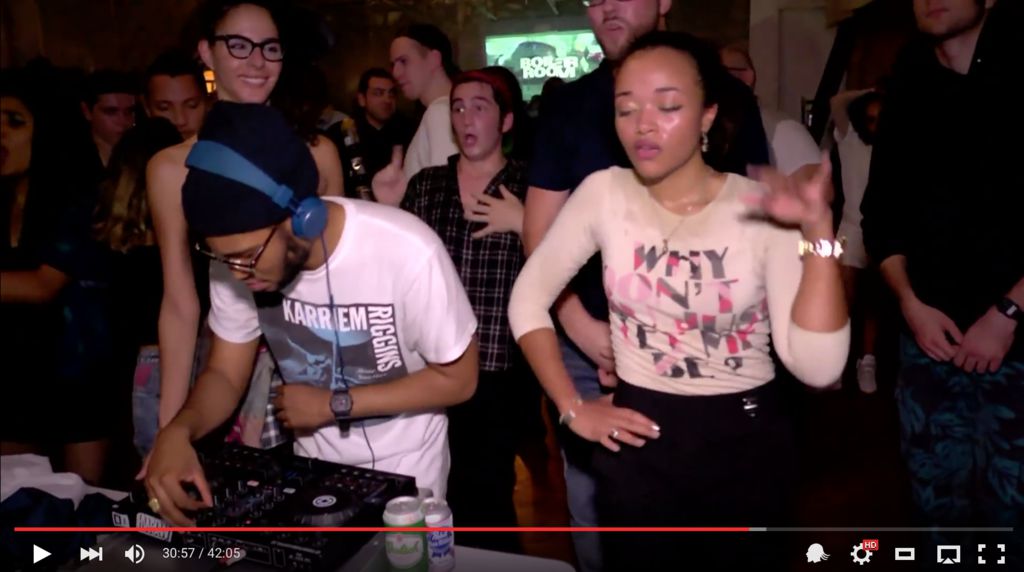 Red Cap puts some sweaty moves on behind Kay, not quite to the standard of Sweatman but nonetheless entertaining. Although perhaps cheeky prodigy2 would disagree as he seems to have a lot of time for Red Cap. ”Red cap guy is pure gold. Contrast him with girl dressed all in white in the background to the right who figured, “just a Janet choon, I’m gonna pass wind and grace these bitches with my aroma”.

Other boiler rooms are major cringe for zombie audiences but this just keeps giving – like every minute!” 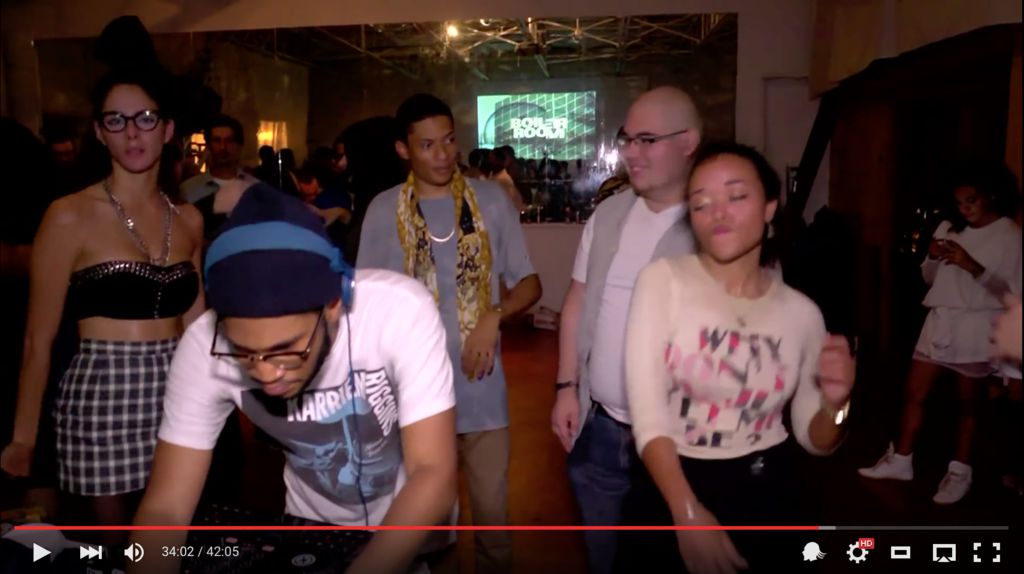 We see Kaytranada flanked on both sides by the two female leads. These two characters are polar opposites. As Esther Jeon Puts it; “You’re either the left girl or the right girl type of girl” This is perhaps the most illuminating comment and as we near the end of the story it’s time to chose. In fact in the background of this frame it seems as though Anthony Fantano / Fat Joe and 514 may be making the same decision themselves. 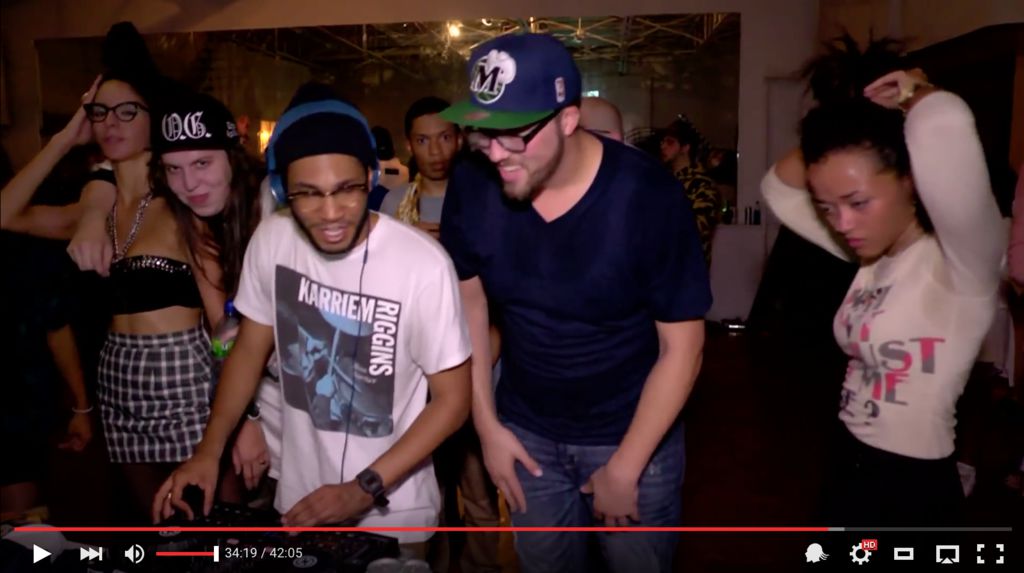 Tommy Kruise arrives and makes his choice without a second thought. Shay Lia’s t-shirt which reads “Why won’t you just let me be” seems to be quite effective at putting the guys off. Then again from an audience perspective she seems to be much more popular than Tall Girl. genericusername2 cleverly references the t-shirt in his comment; “what’s with all the judgin these people for their dancin? WHY DON’T YOU JUST LET THEM BE ;)” but then he chimes back in with “but I gotta say, tall white girl is tooo funny :D”. 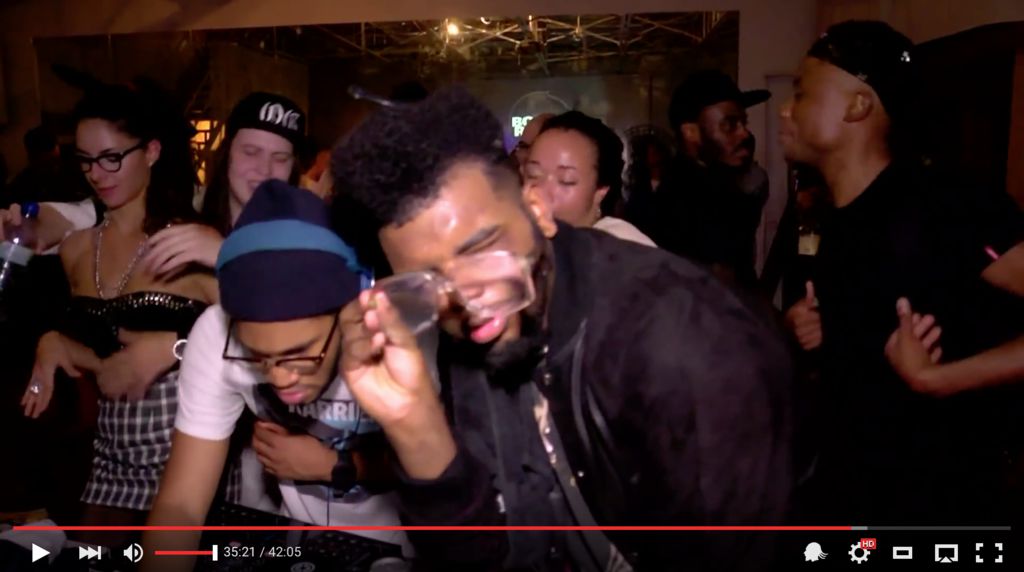 Each time we see Hi Top he seems to be less and less able to focus on his surroundings. Perhaps this is why he has acquired some clear lens glasses along the way. He attempts to break the fourth wall but doesn’t seem to be able to line his glasses up too well with the camera, we can only assume this has something to do with the “soooo many people on MDMA”. 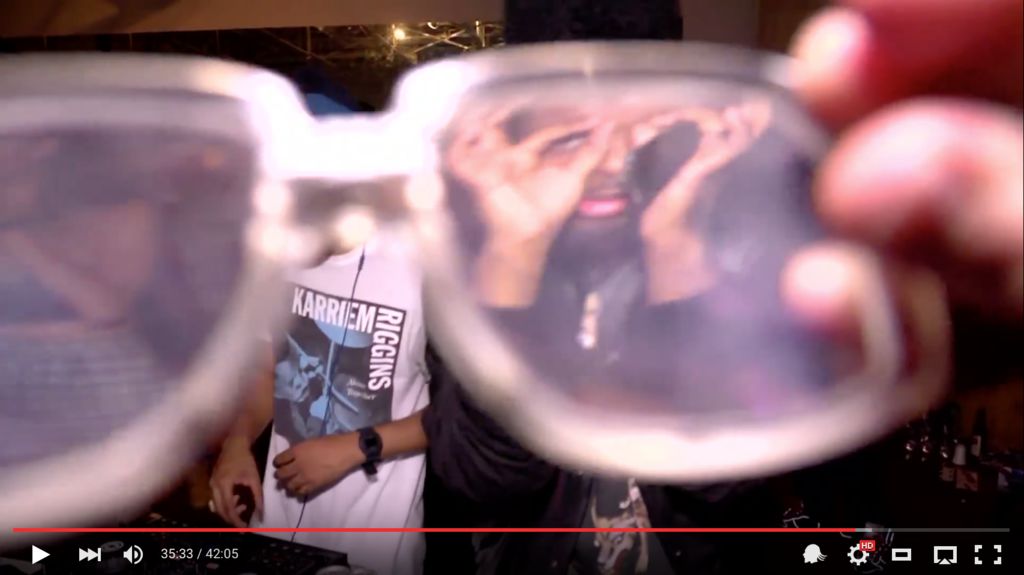 A few seconds later the camera itself responds by putting on the glasses. This is a very surreal moment in the narrative where we realise that we to have become so embroiled in the stories characters that we are at risk of becoming a character ourselves. Seriously deep stuff. 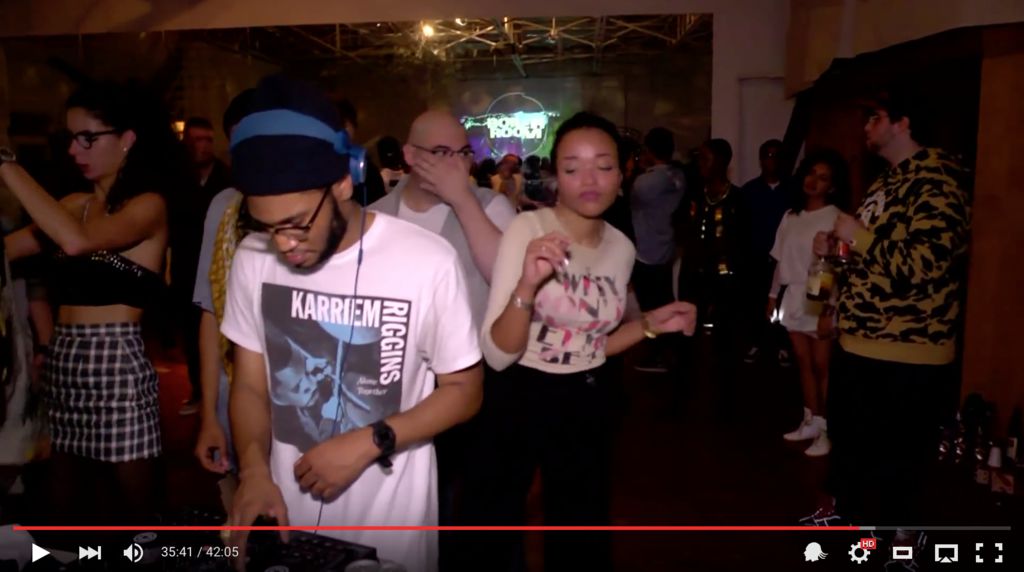 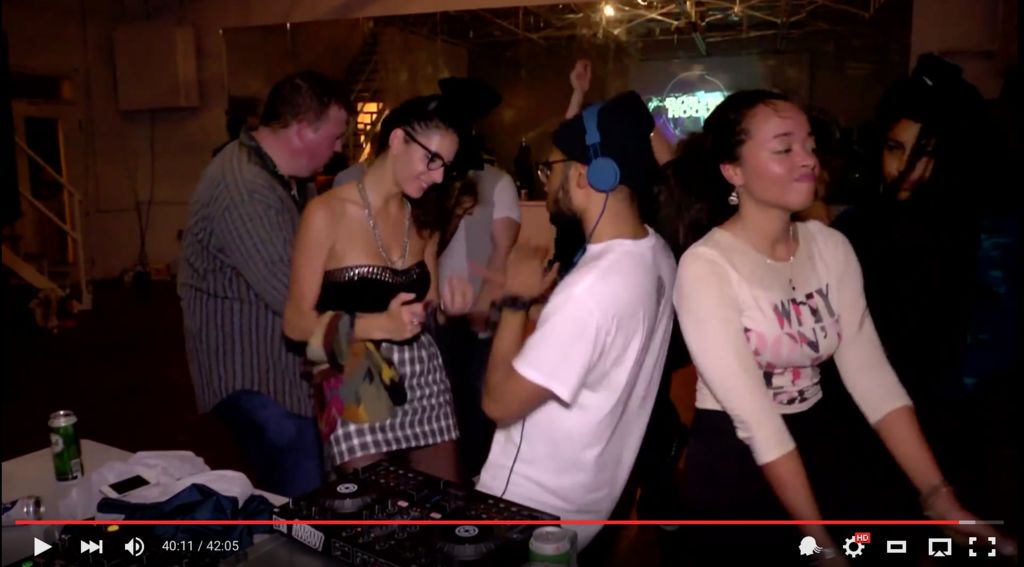 In fact nearly everyone does manage to pull some moves, even Kaytranada takes time for a dance at this point and Ch az points out that this is the “first boiler room set i’ve seen where everyone is actually dancing and doesn’t look bored !” 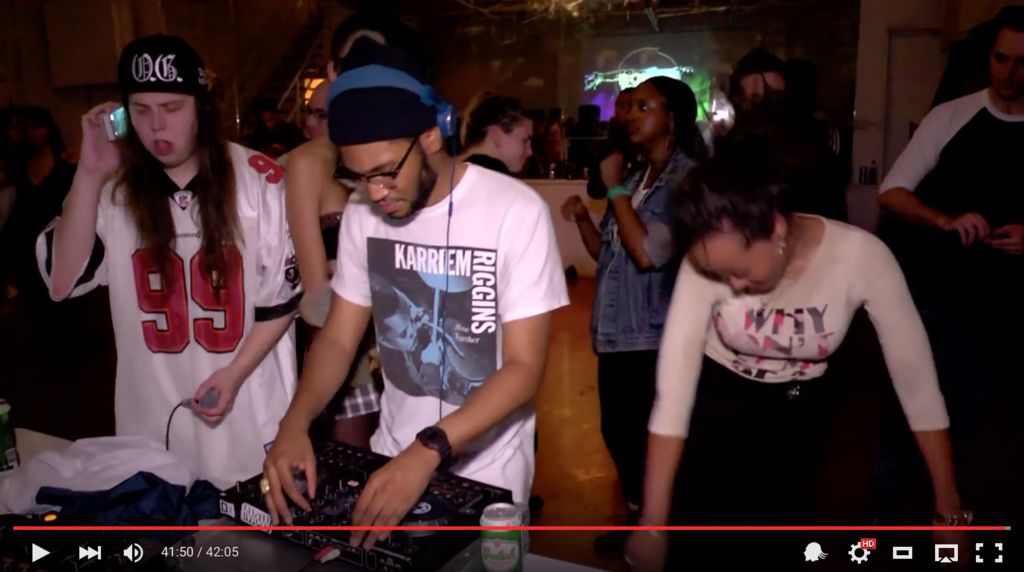 Just before the story’s abrupt end, we are treated to one last comedic gem from Tommy Kruise. There are a few theories about what exactly he is up to but it seems to be another comedy phone stunt. For a few seconds he appears to be calling someone, which seems ambitious in itself, and then suddenly he drops the phone without a single thought. Then he simply picks up the mic and signs off with an extended vowel sound – what a guy. What an unforgettable session, thanks Montreal.

Check out Kaytranada in Melkweg Amsterdam on the 6th of May