With the dreaded winter months just a stones throw away, BPM have released the first ten showcases ahead of their 10 day and night underground, dance marathon music festival, which will run from January 6th – 15th 2017, and take place in the picturesque Playa Del Carmen, Mexico.

With the festival celebrating its 10th year anniversary it has managed to pack in an eye watering list of globally respected music labels and iconic brands, as fans can look forward to Jamie Jones bringing his infamous Paradise party, Hot Since 82’s Knee Deep In Sound, Marco Carola’s Music On and Steve Lawler’s ViVA Warriors, to name a few, to bring Mexico a festival like no other.

As you can most likely imagine, it takes a real partying professional to be able to hang on in there for 10 days straight, listening to the best in house and techno, from when the sun sets to when the sun rises. BPM invites its festival goers to commence on an adventure around some pretty insane stages, from raving it up on white sandy beaches at the Martina Beach Club, to exploring the depths of The Jungle at the ever anticipated YA’AH MUUL party, happening in both the opening and closing weekends.

With the tenth anniversary creating a sentimental feeling, BPM organisers have gone that extra length to make this one the best one yet, as they reminisce over the first festival which welcomed just 5,000 attendees and 30 artists in 2008, to a whopping 70,000 attendees and 430 artists in 2016. The festival brings music aficionados together to escape winter and set the tone for the upcoming year with the biggest global DJ names and rising underground talent from the house and techno spheres while dancing in the sand by day and in the clubs by night, enjoying every aspect the Mayan Riviera has to offer.
BPM parties are hosted both day and night at multiple venues in Playa Del Carmen. The town offers a variety of luxurious and affordable boutique hotels and condos, and endless options for dining and tourism, including: ancient Mayan ruins, cenotes, aquatic sports and ecotourism.

The festival still has over 70 parties and 400 artists to announce on its 10 day line up and is the perfect way to get into the swing of the New Year and welcome it with open arms, inevitably breaking those New Years Resolutions in full swing, party style. 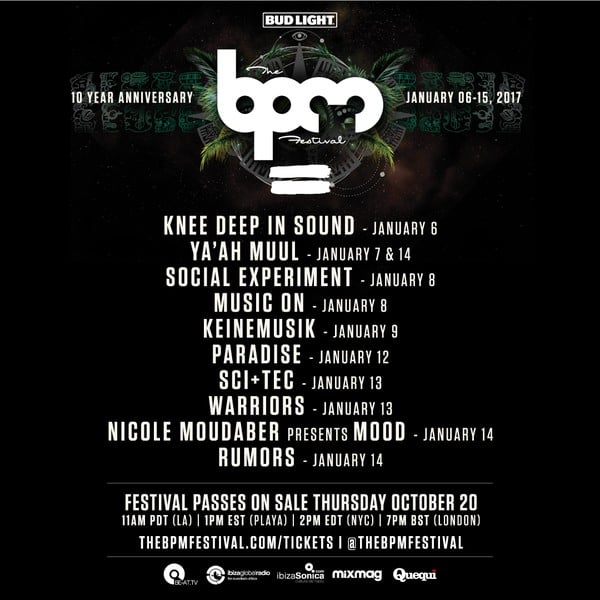