What do you see in the above picture? A not so pretty looking building block that is surrounded by water, right? A regional estate agent even couldn’t give it a more positive spin: “I’m not going to lie to you, it’s an absolute monster.” There are however a couple of daredevils that have started a crowdfunding campaign to turn this abandoned fort in the middle of the sea into an immersed partying mecca. Or as they call it: ‘Berghain-At-Sea’

The ‘Grain Tower Battery’ as the buidling is called, is a Victorian fort which has attached brick walls from the 20th century and a concrete gun tower. This beast of a building lies of the coast of Scotland, near the Isle of Grain – the meeting point of the rivers Medway and Thames. At around £500.000 pounds, the price seems relatively cheap, seeing as what you will be getting for it. 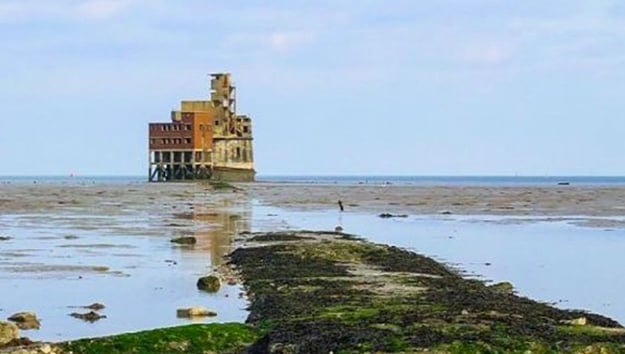 The boys of Minival have big plans for the fort, though, and have started a crowdfunding campaign on gofundme.com, where they call upon potential investors to make a donation and help them reach their target amount of £750.000 (including the renovation costs). The goal: to create a “Berghain or Trouw in the middle of the Sea. It’s Raw. What we want to do is [..] create a safe haven, where the party will never stop.” The overarching idea here is that the partying will go on continuously, since you’re outside of the city limits and aren’t harassing any neighbors with the club’s and club goers’ noise. Imagine yourself on a boat on high tide that will bring you across the sea passage to the a clubbing fortress. Or to go and have a smoke in the designated gun tower smoking lounge.

Minival themselves know that the idea is ludicrous, but have a firm belief in their new dream: “It sounds ridiculous but imagine if what we set out to do was accomplished, we call on everyone, for the love of music, for the love of the party, get involved. Dream to Dream.”