Ricardo Villalobos’ is celebrated worldwide for his uncanny ability to blend the most disperse musical styles and ambiences into his colourful sets, nearly perfecting this trait into an art form in the past two decades he’s been active. Though sometimes the Villalobos method doesn’t always work, as could be seen during Cocoon In The Park last weekend, where the German-Chilean “bombed” his set, with quite a backlash from visitors and fans who took to social media afterwards to ventilate their disapproval.

In a thirty-minute video taken backstage you would think you saw a Villalobos in top form: long plays of even longer tracks, distinct dance moves and sweaty locks of hair clinging to his forehead while looking more at those backstage than to the actual festival goers in front of him. 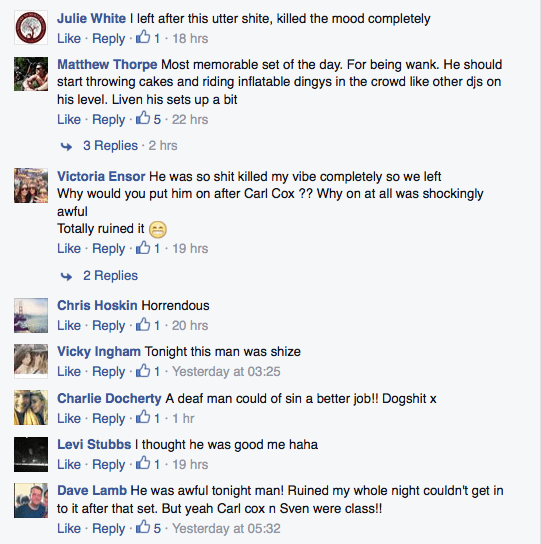 Some of the comments left on the event page

Looking at that crowd we can see that nobody’s actually dancing, and there are multiple reasons for that. One is that the DJ playing before Villalobos was Carl Cox, a showman who is of course a living shot of adrenaline behind the decks compared to his follow-up (nice job of the booker there..). Two, is that people would love to hear Villalobos’ eclectic playing in a club setting, but not at a festival, especially one of this scale and name. To make matters worse: while it was dry during the entirety of Cocoon In The Park, it started raining during Villalobos’ set, and quit again soon afterwards. As if it were divine intervention.