We knew it was going to be an amazing collection of house and techno artists, but honestly had no idea it would be this packed with so many artists to play 72 hours of music for an intimate crowd. The lineup features way more than just the traditional Desert Hearts crew, made up of Mikey Lion, Porkchop, Lee Reynolds, and Marbs — this year the festival features a versatile mix of house and techno acts: like the psychedelic sounds of Öonah Dahl; the fun party vibes of Berlin based The Glitz; local California favorites like Sacha Robotti, Marquees Wyatt, and Justin Martin; live spectacles from KMLN and Monolik; and so many more.

How are any of us supposed to sleep at an event with a lineup like this? Unlike the larger more mainstream festivals Desert Hearts is known for it’s one stage one vibe set up. That means all of the artists and all of the fans have to congregate at the same place. Also, the music literally never stops. There is no moment when the baseline fades away and everyone trudges along to their tents or to party it up in the campgrounds. No, here, it’s 72 hours of unadulterated techno. If you have had the chance to experience any of the amazing City Hearts parties the crew has been putting up at various locations around the world like Playa del Carmen, Brazil, New York, Miami, etc— then you know the sort of intimacy involved in a Desert Hearts Event.

Personally, I didn’t even need the amazing lineup to know I would be starting off my festival season at Desert Hearts. I knew the music would be sensational; but, every person I spoke with at Dirtybird, CRSSD, and even Burning Man last year mentioned this festival to me as a unique, intimate, and magical experience. I cannot wait to dance beneath a desert sky to mystical music as the sun rises and sets and we become one— because, let’s face it, we are all desert hearts. 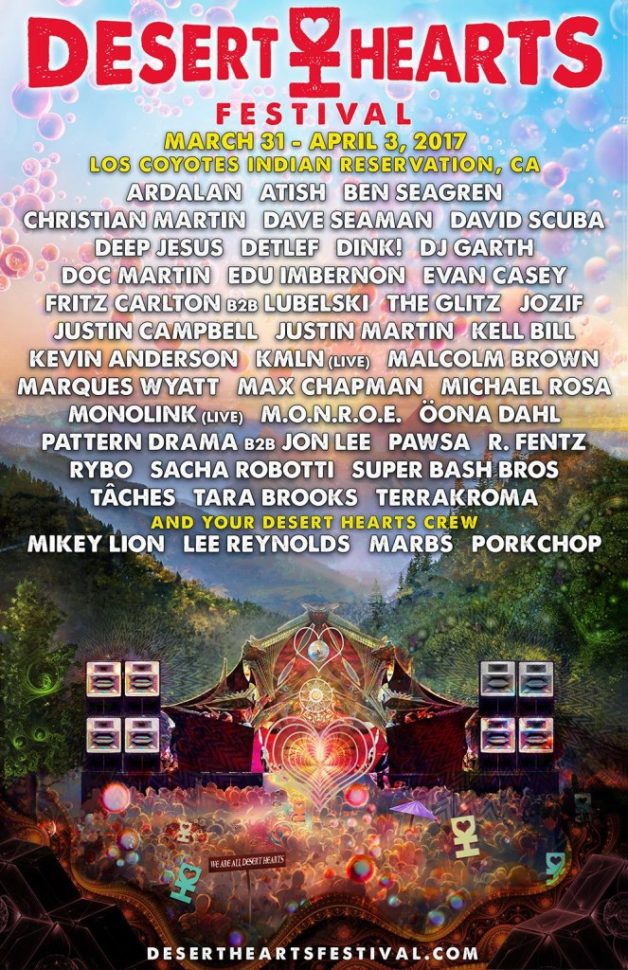