Forget the fear of missing out at Dimensions. It is a festival that is not so much about big names, but moreso about discoveries and experiences.

However, there are few performances we are waiting for like kids for candy so we cannot go without emphasizing the reasons why one should not miss them. And last but not least, we have prepared our subjective schedule for the festival, which we are happy to share with you below

After almost six years of silence, Massive attack has come back with even new subliminal productions on their singles “Ritual Spirit”and “Spoils”, soon to be converged in the band’s first album since 2010. Collaborating together with a set of unique British artists, such as Ghostpoet, Roots Manuva, Tricky, The Young Fathers or Azekel, the duo has created tracks of separate entities and stories, that overlap in the same certain Massive Attack style. That is something to witness.

Countless documentaries, witnesses, books and magazines have already introduced this man and his colossal contribution to contemporary underground, electronic music. It is an honor to witness his first performance after 15 years, a so called “Soul-Deep-Acid Electro-Visual Experience”. His approach shall be overtly simple – the artist and his catalogue of irreplaceable modern classics. 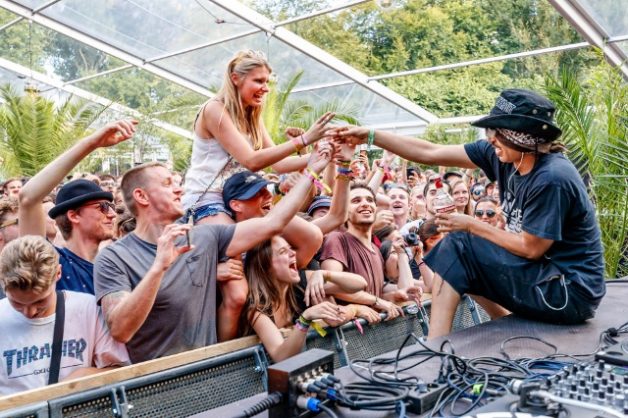 There is simply never enough of Moodymann. The man, the mystery and his sexual, groovy musical productions as well as his own appearance is something parallel to the mystery of Prince himself. Moodymann is a regular at Dimensions festival and this year it will host two of his performances, one in the amphitheater and the second late in the night on Thursday.

The first time I saw Debruit on a big stage was in the at the time, biggest electronic music festival back in 2011 Lithuania, called Satta Outside. The stage set up in an abandoned soviet amphitheater for sports ceremonies, his appearance, and most of all, his out-of-this world music, bounding beats and rhythms created a subliminal memory. Now 5 years after having collected far more electronic music knowledge, I think he is still one of the pioneers of today’s sound, surfing through complementary culture clashes.

Like a festival on a beach is supposed to, Dimensions along with their partners is presenting a comprehensive amount and quality of boat parties. The particularity about a boat party is that if the DJ goes into a monotonous set, you won’t be able to skip it and run to the next stage. Thus it goes without saying is very important to choose the line-ups that can surprise. Keeping their line-up hidden to the very end, the legendary Glasgow’s club shall take us on a very different trip, contrasting to the usual dark industrial walls of Sub Club. The mood curated by the club disregards the genres, however depends highly on the community feel, that’s why I would certainly boar on this ship for the sail.

AGENDA FOR THE DIMENSIONS NIGHTS: