Will Saul, the prolific Producer and DJ behind Simple Records and Aus Music, has a new concept mix series up his sleeve with the first edition out at the end of the month.

Entitled “Inside Out,” the series kicks off with Will himself in the mix for its first edition, and draws from his strong curatorial ear and expert insight into specific sound worlds. Blurring the boundaries between traditional artist albums and mix compilations, “Inside Out” encourages artists to showcase their own music and/or those in their respective circles. By giving artists solo creative freedom, each edition features 100% new and unreleased music, allowing each edition to take on its unique form and approach depending on the artist at the helm.

Will’s mix features an array of artists including Lone, Pearson Sound, Move D, Gerd, Youandewan, Martyn, Falty DL, Dauwd, Appleblim and Marquis Hawkes, showing off the many facets of his own sets, productions and labels over the last 15 years. Here, we sat down with Will Saul to get an unparalleled inside look at the concept from seed to mix.

“In my mind, electronic music is still best consumed as a continuous mix.”

When was the seed for “Inside Out” originally planted in your mind?
It happened in stages and organically. The DJ-Kicks mix I did was comprised of entirely new and commissioned pieces. I think that may have been the first time anyone had done that. People like Omar S and Ricardo Villalobos had done fabric mixes with their own music, but no one had ever done a mix comprising entirely of new and exclusive music from a range of people. I set myself to do that with DJ:Kicks, mostly as a way to showcase the scene I operate within, as well as all my friends and family. At that time, it really represented how I played out as I was working with a lot of forthcoming music from the label, friends, and family. It was a neat and tidy concept. As a result of going through this process, it made me realize this approach was definitely possible as I was very happy with its end result. Going into DJ-kicks, I was thinking what would happen if someone sent me something I didn’t like, if they are going to be offended; how long will it take; will I have enough music; will I have too much music? I was able to answer a lot of these questions in the process of making that mix. Then down the line, I thought about how many mixes and podcasts there are, yet everyone having already heard it all in terms of music. Of course, there is insight into what a certain DJ is playing at that moment but I loved that feeling of late 90s clubbing where you heard your favorite DJ but never heard any of the tracks they played before. Over the course of hours you wouldn’t even know what you were listening to and that was a big part of what was blowing your mind. This is what would make you go back and hear that DJ again as you knew you would hear totally new music that you had no way of getting. This rush made me think how much I liked the idea as a foundation for the series.

As I was thinking about it more, I also thought, depending on who I asked to contribute to the series, it could be a concept artist album, of sorts, presented as a mix. If you get a Producer who wants to use all their own music, you can give them free range to basically create a one off album. They can start at point A and move to point B without worrying how it would flow as a “traditional” album. In my mind, electronic music is still best consumed as a continuous mix. Whether that be in the nightclub environment or as a mix, I think the genre has often struggled when (electronic) producers try to make a traditional artist album, where the most important track is #3 with a vocalist and all that kind of stuff. I think a lot of electronic artists find this approach quite constraining and difficult to work within. Based on the response from artists who I’ve inquired about more of an artist album submission, this way seems quite freeing.

Were you set from the beginning that you would provide the first edition of the series?
It was always in my mind. I always knew how I wanted to do it and who I would approach to do it afterwards. I was comfortable with the licensing process and how it all worked so I knew how much time to give myself. Redoing this after DJ-Kicks made me know how to do it properly so when the next edition is due, I can give a lot more advice as to how the artist should approach it.

How do you define curation in terms of such a concept? Do you consider curation as compiling the tracks/artists on the individual mix, or for the artists who put together the entire edition?
When I’m looking at who I would choose for “Inside Out,” and I know they are going to do a job like I did, where 90% is from other artists, I already know who they may ask for tracks, if that makes sense. I know the music they are releasing on their label, the artists they are connected to, and this gives me pretty good insight into their approach toward acquiring new music.

From a practical business element, does the licensing aspect, and its affect on the final product, fit under your definition of curation? Or, would you consider it just “reality”?
It’s linked to curation in the sense that the artist approached needs to be prepared to work within certain terms. When you approach 15-20 (sometimes more) artists to contribute music, you can’t let the budget spiral out of control otherwise it won’t make financial sense. With that, you can’t just approach only “huge” artists. Then again, the artists contributing do see royalties and usually there is a personal relationship there so they still do want to see the person curating and doing the mix succeed. It also shines a spotlight on what they are doing as artists as they are part of a big project so it’s all linked together. It’s a different feeling when you’re licensing a DJ-Kicks as there isn’t necessarily the personal connection between the musicians and producers.

Speaking specifically about your edition, what was your thought process behind the mixes narrative?
It was multi faceted in the sense that I didn’t want my mix to be a representation of what I play between 2 – 4am on a packed dancefloor. I hoped the mix is deep and I wanted it to have two peaks. I wanted it to go up and down, then up a bit higher and back down. I wanted it to be more of an up and down journey rather than building toward a peak. Then, I briefed different artists to contribute in different ways. Certain people I asked to present multiple styles in a more stripped back way so I would reference passed tracks they had done that were more lax. Other artists, from whom I wanted something more full on, I would say simple it should be melodic but not necessarily geared entirely for the dancefloor. Finally, with even other artists, I wouldn’t say anything at all. I wanted them to simply deliver what it is they do. It was a careful curation within the spectrum of individual producers.

What would you say some of the primary challenges were in getting this from concept to physical product?
The amount of time you need to allow to get all the tracks in. From when you start approaching people, everyone has their own schedule and may not necessarily be sitting on tracks that are good for the project. I knew to leave myself a lot of time to get all the tracks in and extra time to chase people in case they weren’t delivering on time.

The licensing wasn’t really a problem as most everyone were friends so I knew there wouldn’t be anyone demanding exorbitant amounts for the feature. In general, there aren’t that many physical mixes around anymore because its so expensive to license it all together.

Then, the challenge was coming up with the visual identity. This was actually quite enjoyable. The way we approached it is, every mix will have a gatefold double vinyl with a selection of 8 of the tracks from the mix. Then, there is an EP that precedes the mix by a month to give people a taste. There is also a CD. Besides coming up with the logo, the visual concept (alongside Michael C Place) was established. I knew I didn’t want to have a person’s face on the cover as I find it a bit boring so we thought to play on words. Here, the words “Inside Out” can have lots of meanings. “Out” can mean AUS, which is the name of my record label, or it can also mean “Outside”. So, it’s almost like “Inside AUS,” or inside the record label. It’s a bit of a play on that bu it also means the inside of an artist.

For the inside of the CD we asked each artist four questions linked to music (objects, person, memory, view). The artists then took a photo representing what they think about when looking at those words. Then, on the outside, I give Michael free range to do something graphically. We tried really hard to do something different with the visual identity and hopefully it gives some extra insight into the person who has done the mix.

Will there be subtle differences in packaging from edition to edition, aside from the subjective nature of the artist photos?
Yes! Each one will be completely different on the outside.

After a few editions, I could see the photos being put together for an interesting gallery show…
Totally! We definitely want to do an exhibition in a few years time of all the artists and their photos.

With this being the first edition of a new series, how do you see its on-site identity? Do you plan to tour with the concept or do one-off shows anywhere? How do you see yourself getting the word out to audiences about the series and its growth?
I want it to grow organically so I have no plans for tours at the moment. I’m approaching it the same way I have always approached my music and labels, which is that its quality will make it gradually reach people. I’d like to alternate the Curator/Producer approach moving forward. There is a Producer doing the next one, which is going to be all his own music with a couple collaborations, then there is a Curator/DJ doing the one after who is very much spotlighting his scene. We are just gradually building the series and its reputation by letting the music speak for itself.

Finally, who would be a dream artist to feature on “Inside Out”?
I’d love someone like Carl Craig. I’d like to ask veterans who have a rich depth of contacts and knowledge. He would be a dream for sure!

“Will Saul – Inside Out” is available 30 March on AUS Music 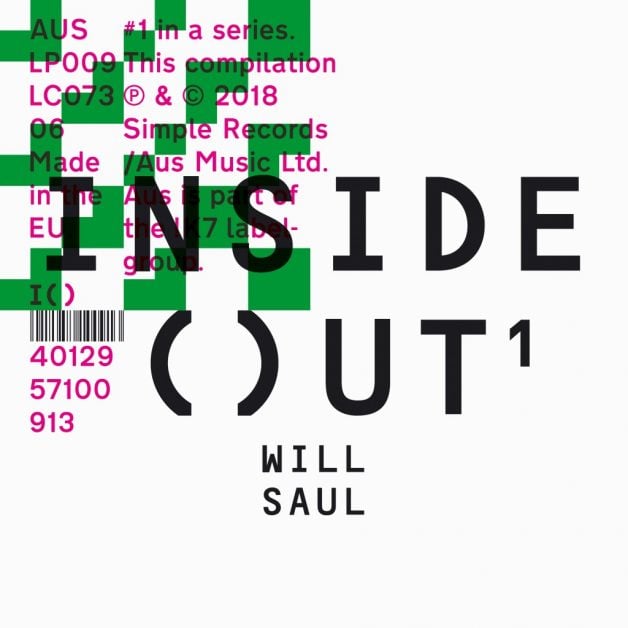