Tonight, the award-winning percussionist Dominique Vleeshouwers presents his world premiere of “Playground“. A 75 min profound exploration through the world of sounds that took the creator everywhere from the junkyards to the dark corners of the club, the jewels of Asian culture and to the glorious interior of the Royal Concert Hall.

Yet another crossover between electronic and classical, however this one is quite different. Armed with everything including every kind of drum and Tibetan bells, to a lap top, synthesizers and drum machines, Dominique and his partner in crime Arend Bruijn took up the challenge of combining the two experiences and atmospheres of a club and a concert hall.

Thus, given the opportunity to talk with one of the world’s most talented percussionists, I couldn’t help but ask him about today’s relationship of the two worlds – classical and electronic. Where is the divide? Social, ritual, philosophical? If so, in which aspects do the two worlds meet?

Yes, I think the clash exists. But to my view, it is just because people don’t know enough about electronic music. Even the amount of styles and differences within the electronic music suggests there is a lot of complexity to it. People who listen to classical music know film music or minimal music, but when you talk about the electronic music they think of it as some of avant-garde sounds. But there has been a middle ground laid out, e.g. a lot of people know the film music genre, e.g. Hans Zimmer, one of the pioneers of using synthesizers with an orchestra in his compositions. So I don’t think the majority judges the genre, I think they just don’t know how complex the compositions in electronic music can be and what can be done with it.

We saw how electronic music can expand our possibilities as classically trained percussionists with art background. In the traditional classical world (which we came from) the electronic inserts have been used mostly for effects or strange sounds and abstract things. While now the spectrum of sounds and the ways we can compose became way bigger. 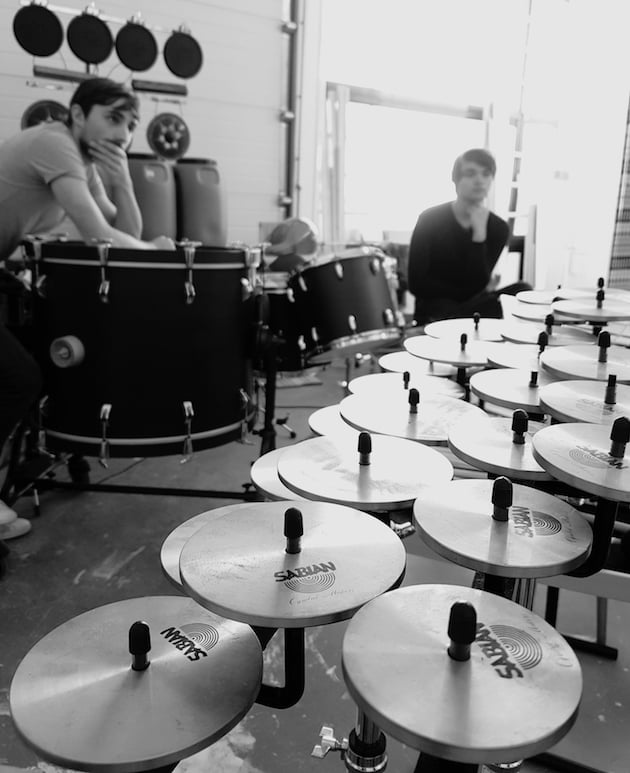 How did the idea for this crossover come up?

It actually started with Arend (Bruijn) and me. We were both educated in the Amsterdam Conservatorium as classical percussionists, which essentially means that you study scores of composers. Our education is tough and focused and, eventually, if you’re good enough, you might get to play here in the orchestra.

After we left the Conservatorium, we kind of opened ourselves to the world. We went to parties, clubs and started to like the culture there. Then a project “Trouw in Concertgebouw” came across, where I played with Patrice Baumel. That was the moment I realised, there are not a lot of concerts like that would attract young audiences. So it became my mission as an artist.

Why did you draw your mission to attract young people to concert halls?

I believe that live music can really do something with people and a concert can truly inspire people very different ways. As the world is going so fast, you are always running, looking around, rushing. Meanwhile, in a concert hall or a theater, you sit down and there is only one thing that is happening in front of you. You listen to those people and they’re can tell you something. It is magical.

There have been classical and electronic music crossover projects previously, namely by Henrik Schwarz, Jeff Mills, Derrick Carter, even your own project with Patrice Baumel. How is your approach now similar or different?

Henrik Schwarz and his orchestra was a different kind of crossover because he was not taking parts of it, it was his electronic music pieces reinterpreted by the orchestra. I saw Jeff Mills two years with the Orchestra of Den Hague, where you had the DJ and the orchestra as two separate elements. Same with Armin van Buuren in the Concertgebouw – a DJ and an orchestra, in their two separate worlds.

I realized that if you want to combine the two worlds, the crossover can only work if you really know both. That’s why I said, if we are going to do it, we know the world we were educated in, so we have to get to know the club world; work together with DJ’s, find out how old the software works, which hardware we need, according to what kind of sound do we want. It became the big research of last year.

However, next to the technical part, there is the club atmosphere, the whole idea of experiencing the music individually however still together, is beautiful.

You mention combining the club experience and the concert experience. However, a big part of experiencing music in a club is dancing. In the concert hall you’re taking that away from the audience. Meanwhile playing percussion instruments that call out movement instinctively. What do you think is this contradiction going to lead to?

I think it’s going to be funny because half of the audience will be probably dancing in their seats and the other half will think that they have to sit still.

So maybe experiencing music while sitting is actually an obstacle for a full experience?

Indeed, sitting is not a natural body stature for people. Children in the classroom can’t sit still, even I can’t sit still. Even with a classical piece I’m moving all the time! Movement is a mental auditive.