“I usually get up at 5 AM for the studio every day.”

He’s an exceptional musical character, even within the reaches of his favourite label/family Kompakt. Try to pin him down during a set and he will have surprised you with a complete 180 before you can say “techno”. You’ve probably heard a lot of Gui Boratto, and that’s not really surprising as he’s been making music even before some of us were born. The Brazilian artists renowned for his eclectic, coulourful productions is coming up with a new album, “Abaporu”, which is being impatiently waited for by fans and critics. We’ve already heard it at the office and we can honestly say that it has been worth the wait. And with DGTL’s Kompakt ADE Special Gui is bound to mount the stage the NDSM-Docklands again and treat his large Amsterdam fanbase to a night to remember.

With ADE and the album right around the corner, it was time to hook up with the architect turned DJ/Producer (although he doesn’t really calls himself the DJ part) to talk about what he’s been up to, the namesake of Abaporu, touring life and the time came across one of his idols at an international airport.

If you look back at Chromophobia, your debut album on Kompakt, what are the key musical differences compared to your upcoming album “Abaporu”?
Hmm, well perhaps Chromophobia was a bit naïve, Take My Breath away, which was the follow-up album, is a continuation on that. The third album was definitely darker; it struck my rock n roll vein haha. Looking back on these albums, I think that Abaporu maybe is a bit like Chromophobiain style and atmosphere. It’s more grown-up, more happy.

There is some techno-ish sides in there, some pop, some tracks for the dance floor and some that are more relaxed. I really wanted it to make a diverse and interesting musical journey.

How do you consider yourself in the dance music producers’ realm of different genres, styles and sounds then?
I don’t consider me to be this or that. I’m a music producer, concerned with good music that I like myself. I’ve been producing for so long now that I could never really place or describe myself in a specific way.

You’ve once said that the way you live reflects the music that you make. How has the way you live now influenced you while making this album?
The DJing/touring life is great, I love it and feel blessed that I am able to do this. But as everybody knows, it can be quite stressful at times. Many times you’re on your own, even though you have a great tour manager with you, you still miss your family. You always eat too late or too early, go to bed at ungodly hours and so on.

So what I do to keep myself productive in the studio after these long weekends, is to go to have dinner really early, spend quality time with my family and then head straight to bed to fix my inner clock.

And what time do you get up for the studio mostly?
5 AM usually. I like it at this time of day, there are zero distractions, and everybody in the city is still asleep so I can fully focus on my creativity and music. I keep this schedule of getting up early and going to bed early all through the week, so that I am again fully charged for a hectic weekend.

You’ve regularly stated “some people call me a DJ, but I’m not”. Why?
First and foremost I’m a producer, not at all a DJ. The term DJ is being thrown around too much nowadays. If you have Traktor on your laptop you’re a DJ. If you can mix two tracks on a CDJ you’re a DJ. Come on..

There are only a couple of people in the world, and I mean literally a couple, who are both a great producer AND a great DJ. The greatest living example of this is Laurent Garnier. He’s a very special person in this world and has been so for a long time. He is equally skilled in both the studio as he is behind the decks. Maybe Richie Hawtin is in this list as well, but he’s more a DJ than a producer, in my opinion.

So what does being a real DJ entail?
I can mix, and I’m NOT a DJ. I cannot do what Sven Väth or the likes are doing behind the tables. Real DJs can improvise on the fly, can mix new songs with old and make them sound like they’re one. It’s about real technique, and emotion that you are exerting on the crowd. You need some years of experience, and I’m not talking about scratching or anything here. I’m talking about earning yourself some EARS. And that takes years and years of experience. 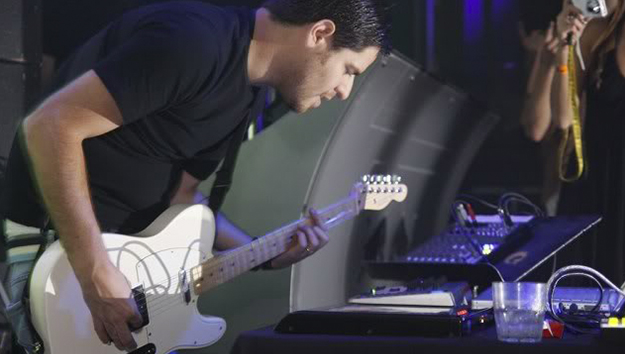 So next to a producer and not being a DJ, you’re also a guitar player and have been since your early years. Who are your guitar Gods?
There are so many favourites, but if I had to pick one or two it would be Jimmy Page of Led Zeppelin and Django Reinhardt. Two opposite guys, one in rock, the other plays gypsy jazz, but both equal virtuosos.

But there are so many other guys I love. Jeff Beck for instance, love his instrumentals and what he can do on an electric guitar. When I was 10/11 I was laying down vinyl records in my living room and playing guitar on top of that to learn to play better, because that’s what he did when he was young haha.

I saw him once. Now I’m not a groupie, I’m not somebody who is star struck when he sees a celebrity passing by or anything. I mean I opened for Madonna and it didn’t really move me. But I was at an airport once, waiting for a flight. And this guy comes walking by, with white hair, shades on, the whole rock n roll look and air around him. And another guy holding ten guitar cases for him and running after him. Then I realised… It’s Jeff Beck! At that moment I kind I was kind of shaking and got goose bumps. I don’t know what came over me man, but that guy was my idol and to see him in the flesh, woow! The same thing would happen if I were to see Jimmy Page some time.

The name of your upcoming album, “Abaporu”, is also the name of one of Brazil’s most famous paintings, made by Tarsila do Amaral in 1928. Is it named after this painting and why?
The painting is one of the key artistic expressions of the Anthropophagite movement, which wanted to get rid of all the direct European influences in art and culture in Brazil. Her idea was to devour Europe’s culture themselves and create something new.

For this album I have used many different influences from rock, pop, jazz, blues and turned it into something that is my own. Now I’m not drawing a direct line with this historical event of my country, it’s just a little joke. But like her, I felt like I was cooking up all of my musical references in one pan to create a new dish.

Your wife sang the vocals to “Beautiful Life”. Can you tell us a bit about that story?
Yeah that’s true. Pretty funny story how that played out actually. I was asking her if she wanted to contribute something to Chromophobia. So we sat in my home studio and asked her to do these lyrics for Beautiful Life. But at first it sounded really cheesy because she was really singing, screaming like a diva. And this didn’t work for the song because it’s already a high-energy production. So I asked her to just relax. A few minutes later we tried again and she was speaking, almost whispering the words into the microphone. And it was perfect! I loved the result and Beautiful Life was finished.

Has she contributed to more tracks of yours after that?
She did work on a very early EP of mine back in 2003 on Plastic City. Then on my debut on Kompakt. And then on pretty much every album where you hear a female vocal that is actually her singing those lyrics. Except for Take Control, that’s Mari, from Brasilia.

How was your experience at DGTL’s Kompakt ADE Special last year?
I loved it! It’s always great to play with that close group of friends of Kompakt, but it is even nicer to all play over in Amsterdam. It’s like you wash your soul over here when playing. I didn’t forget the reactions of the crowd at DGTL ADE last year and DGTL Festival. I’m looking forward to it.

And I hope that we will be arriving on the NDSM-Docklands in style again like last time. A boat was rented for the artists and we took a trip across the river to the location of the event. What an entrance that was haha!