On July 13th, A Day At The Park will be throwing a party at ‘Het Amsterdamse Bos’, where Rodriguez Jr. plays a live set. We are happy to announce this interview with a world-renowned artist, who has a busy life being the famous Rodriguez Jr. and on the other hand a family man.

– In real life your name is Oliver Mateu. Would you describe Rodriguez Jr. as a different person, as in, do you act or feel different when performing or being recognized?
I obviously don’t have the same behavior on stage as in a supermarket. I think it’s more like a schizophrenic thing: Rodriguez Jr. is a part of myself I can choose to show or hide, depending on my mood and the situation. But I feel very comfortable with him. He’s quite a cool guy after all.

– A cool guy he is, and living a comfortable life is important to stay focussed! In my opinion it seems difficult to separate your life back home with wife and daughter, and being a well-known artist all around the world. Is it hard?
It’s tiring but not hard, and actually that’s how I manage to have a proper balanced life. It would drive me crazy and I’d probably get wasted if I wouldn’t have to wake up early every Monday morning. This real life allows me to keep on moving forward and stay on the course.

– Speaking of your daughter, did she inherit your musical genes? And is there a possibility for collaboration? 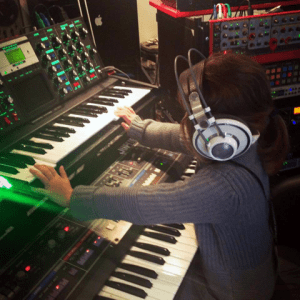 She asks loads of questions, and I share my experience and knowledge with her, and we spend a lot of time listening to weird stuff in my studio, where she tries out all the new gear I buy. Recently she has been tweaking the Moog and my modular synthesizer a lot, interconnecting modules, trying different kind of filters and modulations. On the other side, her approach is also very inspiring to me, as it brings back the creation process to something more spontaneous and intuitive.

– That is cool and it seems like she already has influence on your music! Talking about collaborations and Rodriguez Jr, your long-term collaboration with Mobilee Records, now for how long are you part of this amazing group of artist?
That’s a long time friendship. When I began working on this solo project, I got in touch with Anja Schneider and Ralf Kollman. They were developing promising things with their Berlin based label, and they already were friends for a long time as we met back in 2003. Sometimes, life brings the right people on your path, and since that moment they have been awesome artistic advisors.

In 2007 I released an EP on Leena – which is their sublabel dedicated to guest appearances – and I eventually joined the parent company in 2009 with ‘Princess Guacamole EP’.

– That is something special, that you guys still work together and are friends after 10 years! The Mobilee record label is overloaded with great artists, which artist is your personal favourite from the crew and what is it after all that makes this crew so special?
It’s not only a label but also a wonderful family. I am sure people can feel this unity during our several showcases. We always enjoy hanging out together and, even though we all have different styles, we share the same love for music. Therefore it’s impossible to pick a favourite act: only top notch music and cool people!

– Being one of those respected artists must feel like a big accomplishment but becoming one takes a lot of time and hard work. What kept you motivated during this long road to your success?
I love to produce and perform music, that’s the only thing I know how to do properly. So I basically get with the flow. And when I am having doubts, I lock up in the studio and spend time with my machines. Discovering new sounds or writing new melodies is my best way to cure anxiety.

– Now we are talking about success and all the great things, but what is the most embarrassing moment during your career?
My laptop computer was not secured properly on stage, and moved around by itself because of strong sound vibrations. Of course, it finally fell on the floor just before the show and I wasn’t able to perform. Isn’t that weird?

– I understand it’s hard to pick one particular thing out of countless exciting moments. I’ve read about your new album that is coming out on Mobilee, this must be an exciting moment for you. What is it in this album that you focussed on and what do you want the listeners to get from it?
This album has two distinctive sides: the first CD showcases my favourite tracks having been released on Mobilee in 2012, and the second one is about original tracks I did using samples, loops and material from the different Mobilee acts. That’s all about collaboration, as I wanted to push the label forward and to create some kind of huge jam session. It’s been a pain in the ass to handle so much material and to record so many tracks in such a short time. But I am very proud about what we did all together, and I hope people will have as much pleasure with it as I do.

–  Is there another kind of music you listen besides electronic music? If so, for what occasions?
I listen to a broad spectrum of music styles, including indie pop, jazz, classical music and more experimental weird shits. When I work on a track, I sometimes listen to the same 5 second loop for 12 hours. And when the weekend comes, I feed my ears with house music for days. So I need to refresh my brain and listen to something else sometimes!

– Experimental shit sounds very inspiring haha. Besides being a known artist in the musical scene, are there other things in life that you still pursuit in your career or dreams to do something else?
Honestly I am living the dream, and I feel very comfortable with my life. Someday I would probably escape from this craziness though. I could build a cabana on a nice beach, enjoying the breeze from the sea with family and inviting friends to party in the sand from time to time. Until then I still have a lot of things to accomplish. I would love to keep on learning, collaborating with exciting people, releasing good albums, and maybe making some people happy.

On july 20th Rodiguez Jr. will be performing at A Day At The Park. If you love his album and want to hear this LIVE, then you should come check him out!

Here you find the closing set for Next Monday’s Hangover ADE 2012 by Rodriguez Jr.