For one late May weekend, Eastern Belgium’s Kelchterhoef Park will be the International dance music capital as Extrema Outdoor celebrates their fifth anniversary with another massive lineup of the finest house and techno artists the scene has to offer. With areas curated by some of the most prevalent clubbing brands, labels and institutions in the world, the outdoor camping weekender has quickly solidified its place amongst the upper echelons of the competitive festival market.

With both house and techno on the bill, Extrema Outdoor’s 2015 edition represents a mouth-watering lineup of the crème de la crème of dance. On the housier side of things will be the likes of Jamie Jones, Tale of Us, Andrea Oliva, Nic Fanciulli, Mind Against, Matthias Tanzmann, Butch, Riva Starr, and Claptone (to name a few), while Adam Beyer, Ida Engberg, Alan Fitzpatrick, Dave Clarke, Len Faki, Marcel Fengler and more bring the techno sound.

Since there are no less than thirteen musical areas on-site, every itch is guaranteed to be scratched on the extended Pentecost weekend. With stages organized by Ibiza’s Circoloco, Elrow and ANTS, Drumcode and Defected holding down the record labels and renowned nightclubs La Rocca, Labyrinth Club and Café d’Anvers bringing the best of their scene to the festival, deephouse, techhouse and techno aficionados can join hands for three days not easily forgotten.

Extrema Outdoor is one of the Netherlands’ oldest electronic music festivals. It has been held in various locations since it debuted in 1996, hosting hundreds of DJs and thousands of up for it partygoers with each edition. As it has in the past, The Kelchterhoef Park in Eastern Belgium will host the three-day, offering partygoers the option to camp or to commute to the festival site each day.

Special features and experiences this year will come in different forms. Like the appearance of Sergio Herman & Nick Bril, Michelin star chefs from the extraordinary “The Jane” restaurant who will be running a foodmarket stand on the festival site.
There’s also a creative artist village in between the two big stage areas, with small little stages, freaky artists and original entertainment, plus there’s the opportunity to take part in morning Yoga Thai Chi sessions to get you energy level back on track for the next day. Last but not least, Extrema will be the first outdoor event where the new Pioneer Wave soundsystem can be heard. 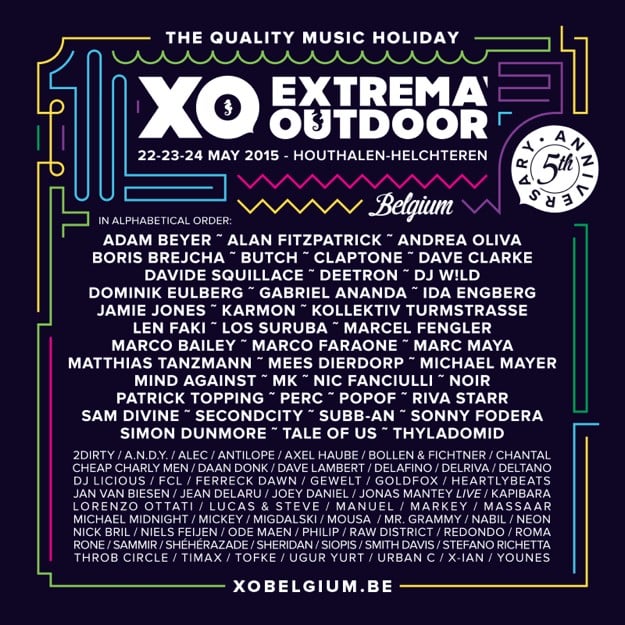