Though vinyl seems to be making something of a comeback in recent years (in fact, its sales are at a historic high), the cost for pressing has become increasingly out of reach for independent artists and labels.  Due to high costs, quantity requirements, and distribution options (or lack thereof), the ultimate accessibility of the practice has become increasingly inaccessible to most.

In drawing from the crowdsourced, populist mantra of sites like Kickstarter, IndieGogo, and GoFundMe, a new digital platform, QRATES, is looking to now bridge the gap between independent artistry and vinyl accessibility. In acting as hybrid of crowdsource platform and social network, QRATES essentially allows creators to build interest in potential presses, only allowing the process to begin once the piece in question gains a certain number of pre-orders.  As you can see, this eliminates the creator’s risk in up front payment or, perhaps worse, the burden of unsold vinyl in an era where space comes as amenity.  With a 100 pre order threshold for pressing, the number falls well below industry standards, which range between 300-500. 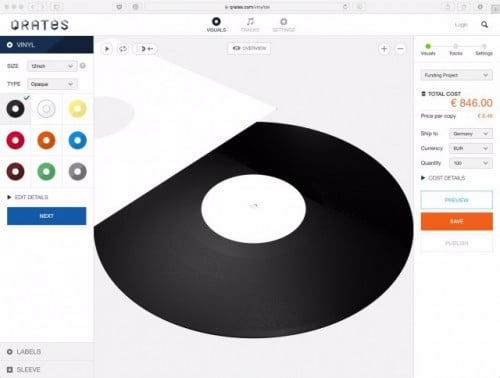 In an added bonus, QRATES also features a diverse design tool, allowing creators to design labels, sleeves and covers, providing ultimate personification and control over each step of the (vinyl) creative process. For the more administrative minded, the platform also allows cost management, as well as analytic functions, tracking users and following money.

QRATES is not only about selling records though, it also allows for fan outreach with exclusive items and content.

QRATES one caveat is, naturally, its percentage take, which stands at 15% of each pre order sale and 10% of back catalogue sales.  But, with an 8-10 week turnaround time, one could argue that what one loses in finance they gain in independence.  With feeling and tangibility nearing the hands and decks of the independent artist once again, the vinyl revival of the 2010’s seems to be moving into increased accessibility for those most economically marginalised of creators: the independents.