When we talk about the preeminent party islands of the world, Malta may not be one immediately coming to mind in lieu of more traditional European tourism fair like Ibiza or Majorca but, with the third edition of its Glitch Festival, this may be about to change and we’ll all be better for it.

In flying over its distinct coastline of three islands toward the southerly located airport, one is immediately struck by Malta’s strategic and accessible position nestled between Sicily and Tunisia. Undeniably rich in culture, and featuring a slew of activities and destinations scattered throughout the island to satisfy the event tourist with the more diverse cultural palette, Malta’s epic offerings traverse a historical context that begins during the era of ancient man before moving with distinction through its Renaissance prime and onwards (including Napoleonic influence, British colonization, and World War 2 disputes). 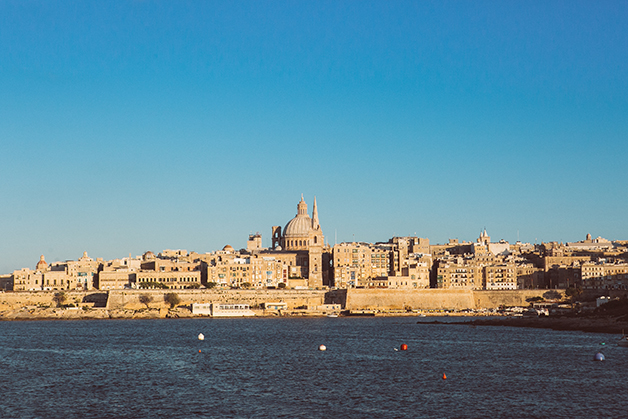 As one of the world’s smallest countries, as well as one of its most densely populated, Malta is one with a rich history, sublime coastline, and an easy going, laid back Meditteranean attitude even the likes of Greece could take envy with. The island is also seeing something of a surge in event-specific tourism, and corresponding events for that matter (Annie Mac’s Lost & Found, IMS College, and elrow all feature large scale events on the island in 2018), with its tourism board highlighting its festival and event offerings with increased vigor. As part of this, Malta’s Tourism Authority brought us over surrounding its preeminent festival destination, Glitch Festival. Held in the expansive clubbing village of Gianpula Fields, outside the town of Rabat, Glitch Festival celebrated its third edition across two festival days with an epic boat party rounding out its mid-August presence.

Thrown by local promoters with precision and passion, Glitch Festival is an event that draws in equal parts from the underground and the main stage. Upon entering the location early on its first day you are immediately struck by the accessibility of the event, yet its allowance for choice given the multi-building options Gianpula Fields offers. There is a typically robust main stage, with sounds to boot, and a slew of secondary stages scattered across the area including a rooftop, pool, and vault.

On the festival’s Tuesday (yes, it was a mid-week event as it surrounded the national holiday, The Feast of St Mary, ever present fireworks and all) our day essentially opened up with one of the names of the moment – Objekt who, in somewhat untypical fashion, played an early evening, main stage set. Technically and musically impressive, swirling through his arsenal of Electro and EBM infused Techno, Objekt was essentially the opening act for the day’s top draw, Nina Kraviz. Nina’s two hours set shattered through the sound barrier to a packed, front to back crowd in typical Kraviz fashion – precise, all-encompassing, and difficult to ignore. Punctuated by her affinity for Ghetto Tech (Slugo – Wouldn’t You Like To Be A Ho Too) and even Hardcore (Marc Acardipane a.k.a Pilldriver – Pitch-Hiker), Nina’s set surely set the energy and sound tone for the rest of the event, which culminated on the main stage with Detroit pioneer Jeff Mills. 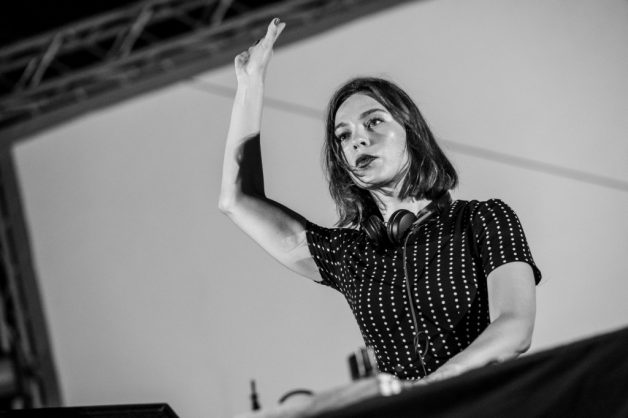 That stage, which ended its proceedings at 2am, gave way to 2 more hours to explore the peripheral stages where we spent most of our time for the one-two punch of Gesloten Cirkel and Call Super. The former, a live act with a stage presence reminiscent of KiNK, fought the sonic barrage of the main stage with a machine heavy set that featured  favorites like ‘Zombie Machine (Acid)’ and ‘Submit X‘, while the latter twisted through two hours genre-defying tracks, albeit to a very sparse crowd (Charlotte de Witte held the majority of the festival’s visitors for the 2-4am slot on this day).

On day 2, the Techno focused main stage was in full effect, but it was a day that started off with a core act cancellation (sickness) from Motor City Drum Ensemble, which allowed Young Marco to go through three hours, culminated with the sublime piano chords of Francesco Tristano – The Melody (C2 Remix). From there it was Floorplan – the combination of Robert Hood and daughter Lyric’s spiritually inspired Techno that kicked off with about 12 bars of relief in the form of Sounds of Blackness – The Pressure (Frankie Knuckles Classic) before going hard into the fray before Rødhåd and Amelie Lens rounded things out through 2am. Elsewhere, Wednesday saw us explore the grounds a bit more, checking out most of the stages including the subterranean VAULT, which featured Dopplerffekt as its only act. Surely the VAULT is a centerpiece aspect of the festival with Dopplereffekt being an acutely curated act given its time and sound accessibility, particularly within a limited space environment. Over the course of its hour, the black masked duo delivered a multidisciplinary audiovisual thesis on theory-driven performance. 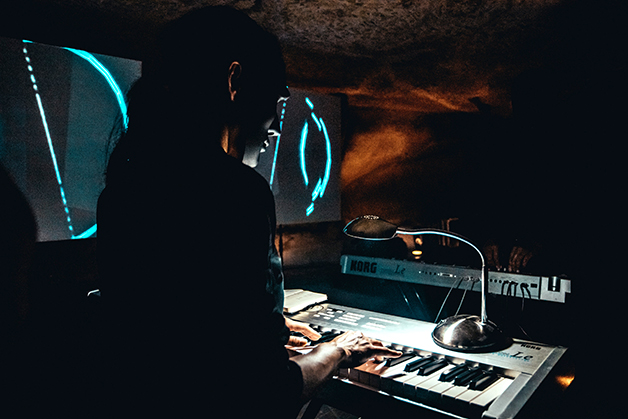 On the rooftop, Malta’s Jupiter Jax gave way to Or:la with a Housey set seemingly tailored made for the throwback Malibu-esque porn vibes (think, Trackheadz – Feel and Mr Tophat – Only One) of the swimming pool laden area. Or:la was surely in the running for the set of the festival, however, the limited space of the rooftop area may have prevented the set from being fully felt, although Nina Kraviz, who had been hanging around the booths of many a DJ throughout the festival, would probably beg to differ. The set of the festival instead went to New York City’s Discwoman staple, Volvox who’s 2+ hour set at the festivals’ Cosmic arena was a take no prisoners barrage of Techno angst. Perfectly suited for “Cosmic” its angry-alien-comes-to-earth vibes couldn’t be ignored and begged full body movement.

Having moved its dates from September to August, and set against the firework displays celebrating the feast of St Mary’s, Glitch Festival has situated itself as Malta’s premiere localized festival event. This, its third year, saw something of a 50/50 split between Maltese fans and others coming from as far as Scotland, UK, Australia, Netherlands, USA, and about 60 more countries represented, welcomed by an island offering an abundance of culture and chill alike. Glitch, and its team who have run San Ġwann’s Liquid Club, by now are bonafide Maltese institutions, and with the recognition of its tourism authority only solidifies its place as a go-to yet still growing destination for eclectic musical tastes. 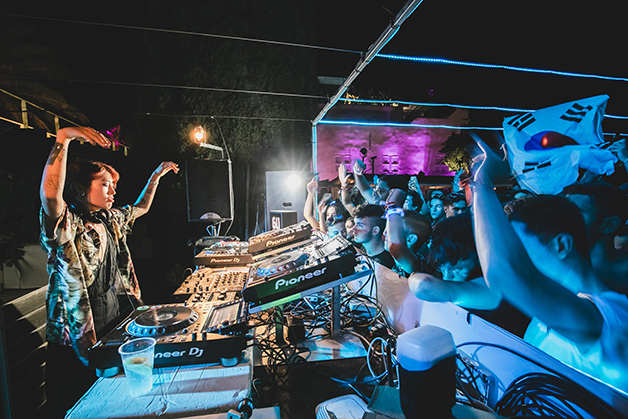 Our time in Malta was memorable and satisfying as a result of all of this. We were taken around its capital city, and European capital of culture 2018, Valetta, a UNESCO World Heritage site (one which hasn’t turned into a venue backdrop for more “major” market promoters), which is truly one of the world’s most interesting and exotic locales. Within its fortified walls lies must-see destinations like the Casa Rocca Picolla and Saint John’s Co-Cathedral (a landmark housing an original Caravaggio masterpiece – Beheading of St John The Baptist). Our only regret is that we didn’t have more time to explore the island but it is without a doubt going to find itself high on my personal list of places to explore – maybe even to spend extended time during a moment of getting-away-from-it-all. For those looking for the combined sunshine and sand with top-level music, forget Ibiza or the Croatian Coast and indulge in all that Malta has to offer. You will find fun mixed with culture, sun mixed with history, and will leave a better person for it. 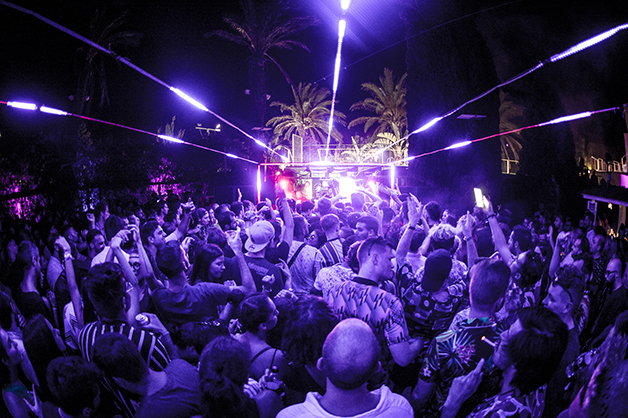