How was our 1 Year Anniversary ?

On the 13th of April we celebrated our 1 Year Anniversary together with UK Sounds in Studio K, Amsterdam. We invited Ejeca, Jonny Cade, Kezla and Oli Furness from the UK to make it an extra special night and Ejeca even did a special 4 hour set for us. 3 from the 4 names never played in Amsterdam or The Netherlands before. The crowd was very enthusiastic and people repeatedly asked who ‘Ejeca’ was, as they loved his 4 hour set. A special night it certainly was and we wouldn’t be able to accomplish this party without the help from Brooklyn Audio, Lo Fi, Alice and Daan van Citters (Since ’88) so here a little shout out to their help and input.

Daan van Citters (Since ’88)
To capture a party you can make pictures, make a video or memorize it. A memory is great but that’s only for the people that have been there. Pictures are nice but a good quality video that gives the viewer the feeling that he/she has been there is something not every video maker is able to create. Since ’88 is specialized in this aspect and with their repertoire for companies like Bavaria, HEMA, AIR, Southern Comfort and many more, they are heading in the right direction. The flexibility, uncompromising creativity and technical excellence in their way of working is very convenient for the clients and the results are always top notch. This night we had Daan van Citters from Since ’88 to make our after movie and as you can see down here the result is great!

Brooklyn Audio
A party needs music and when it comes to music you are always looking for the highest quality in sound. We found this very high quality and it is called ‘Brooklyn Audio’. A brand by a man who is more trustworthy then anybody I know when it comes to quality sound. Where others just deliver the speakers, he will come over to the location to find out about every little detail so he knows what he is working with. 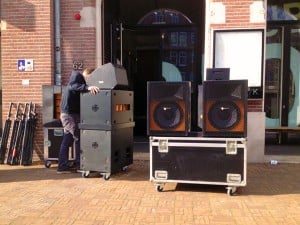 Lo Fi
Telly, the guy behind the concept Lo Fi, delivers nothing but quality when it comes to visuals. Where others stop, he goes a step further. No simple projection but visuals with a thought behind it. He already delivered visuals for Loveland Festival and other big events. Projection mapping is what Telly focuses on mostly. 3-D mapping is what makes a party special and gives it another dimension. He and his crew know where they go when a booking is requested. They know what kind of people visits the party and what kind of music is being played. This way they can prepare themselves well and fully contribute to the party. As Telly says: ‘Good parties are not only determined by the music itself but the complete audiovisual experience is what makes a party succeed or not and I like to be part of that’. Telly Bobas also teaches other how to VJ and does this for a program called ‘Pindakaas TV’.

Alice
Ships, planes, bridges and so now and then a tiger or a unicorn, for these guys nothing is too crazy. I introduce you to Alice. Alice is an organization working together with the events from White Rabbit and through these successes it opened the doors to many other events. When Alice follows its fantasies every day would be just as fun as tomorrow and their creative works would satisfy your eyes just as much the music satisfies your ears.