With the days quickly ticking away towards summer, Barcelona and OFF Week is simply the place to be this June.

From 15-19 June, IR BCN brings their distinct brand of electronic music events in world-class, one-of-a-kind venues back to Barcelona, with some of the world’s best DJs, live acts, and dance music brands in existence.

A few weeks ago, we had announced the lineup for 2016’s edition of IR BCN, which includes the likes of Nina Kraviz, Maceo Plex, Ricardo Villalobos, DJ Koze, KiNK, and many more (see complete alphabetized lineup below) and, not to mention, brand associations with Ellum, Detroit Love, FRRC, Mosaic, People Like Us, and  трип but today we take a closer look at the event’s location: Poble Espanyol.

Built in 1929 with the intention of showcasing the “ideal model” of an Iberan village, the medieval replica was originally conceived as a center for art for that year’s Barcelona International Exhibition. With its two components, El Monasterio and La Plaza Mayor, El Poble Espanyol has all the characteristics of the traditional peninsular village, with atmosphere to spare. As it sits above Plaza Espana on the Montjuic hill, the venue also provides panoramic views of the beautiful Catalan capital.

Specifically, El Monasterio is exactly how it sounds, a replica of the romantic monasteries that date back to the X and XI centuries. Featuring rest areas, private sections, showrooms, and workshops, El Monasterio is prime for an unforgettable outdoor experience.

Not to be outdone, La Plaza Mayor stands as an exact replica of Segovia’s Riaza Castilian Square. The venue for the weekend’s festivities featuring FRRC and Mosaic, this beautiful space allows for activities of all descriptions, morning until night.

As Each year, IR BCN curates an innovative and sophisticated program presenting emerging local and well-established International brands, maintaining Barcelona’s place as one of the top 5 avant-garde cities in dance music worldwide, with their massive 2016 edition no exception. 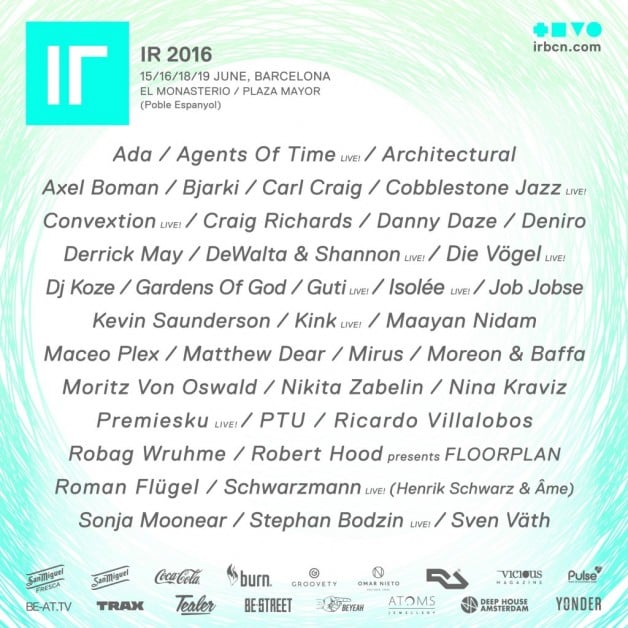