New “rules and regulations” have forced the cancelation of yet another popular party on the Balearic party hub of Ibiza.

This time it was Guy Gerber’s party brand Rumors, which had a very successful season so far and certainly created buzz, as it was undeniably defied the current Ibiza trends by being completely free of charge.

Due to similar “regulations” several parties have already been cancelled throughout the summer. First, it was Carl Craig, who announced on his Twitter account that the latest edition in his Detroit Love series would be shut down due to “reasons beyond our control.”, while tINI revealed to be looking for a new location because she’s “no longer allowed to do parties at No Name Beach.” Recently, Diynamic‘s Solomun posted on his Facebook page that the closing of his latest residency, Solomun +LIVE, as well as Luciano‘s closing party had also been cancelled due to “external issues” at Destino Pacha Resort.

Could have not playing by the rules been the real underlying reason behind these special “restrictions and regulations”, would be too speculative to say, but there have been several artists who spoke up about Ibiza taken by changes, in comparison to the place it was before. A long-time Ibiza local Carl Cox talked earlier this year that the VIP culture is spoiling the state of the club life in the island: ““It’s not just me being old, Ibiza is spoilt now. You can go down to the Hard Rock Hotel and you’ve got Ushuaia with its high-end DJs, big bottle service tables and two-tier VIP areas. Everyone used to be together when they went out and on the same dancefloor.”

Guy Gerber spoke about this prior to the cancellation of Rumors himself. To his opinion, the island’s scene became subservient and greedy: “Now, people just think about massive raves instead of what Ibiza was about, parties and music and community. Everything is trying to be big now. There’s a lot of greed over here.”.

Nevertheless, both Coxy and Guy speak fondly about the dance scene in Ibiza and expressed to have great seasons on social media, but it does seem the “rules and regulations” taking over the island are becoming harder to handle to the independent underground party organisers than the major clubs. 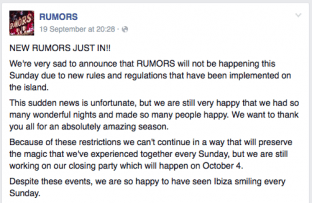 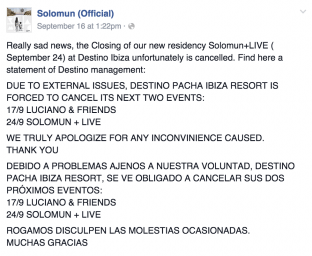