Ever since the release of her “Exhale” EP off Italy’s Lyase Recordings, Amelie Lens has been on fire.

With the immediate approval of Pan-Pot and their Second State imprint, Amelie enjoyed a newfound exposure and respect amongst the techno elite. Aside, Amelie Lens also curates her own nights at Belgium’s famed Labyrinth Club, which sees her regularly sharing the decks with the best the underground has to offer.

Now, with a bus schedule that includes a stop at the aforementioned club’s debut Croatian Festival event – Labyrinth Open Croatia – we managed to catch up with one of the hottest names of the moment and get a sense of how life has changed over the past handful of months.

“the world is so big and so are my dreams!”

So, it has undoubtedly been a big year for you, what has been the craziest thing you’ve experienced as a DJ in that time?
This whole year was just crazy! I was just talking to my agent the other day and he told me that last year I was playing at Extrema Outdoor as a “local artist” and I said that I would be happy to just play one gig a month as long as it’s a good one. I had to think very long to realise that this is indeed only one year ago. I can’t just name one thing because this whole year was just unbelievable haha!

How has your summer schedule been in comparison with your schedule for the past few months before? Usually the summer is a particularly busy season, but it seems like you may have had a constant “busy season” lately. Has there been much of a difference?
My summer is not particularly busier than other months. I think the summer feels a bit more hectic because it’s club nights and then you also have the festivals during the day so often there is no time to sleep. But in general I try to avoid that because I want to be my best on every gig.

Speaking of hectic schedules, how do you maintain your health and mindfulness? Do you have any meditation practices or other tricks?
I’m very conscious about what I eat or when I sleep. For example I always avoid unhealthy food during a busy touring schedule. And whenever I play after 3am, I usually also try to sleep before the set. On the first flight of the weekend I’m usually double checking new promos. During the rest of the weekend I try to relax on the flight by watching a movie.

We’re speaking here ahead of you performance at Labyrinth Open Croatia in July. Obviously, Labyrinth has been a big part of your success. In your own words, can you discuss how the club and brand have aided your career?
Labyrinth club is my home! I played at the opening of the new club in Hasselt and shortly after they gave me the opportunity to host my Exhale events there. I’m also hosting a stage at Labyrinth Open this year, which i’m super excited about. I also played my first and only allnighter there and will do this again in September, it was one of the most fun nights of my life!

What do you think Labyrinth brings the dance scene in Belgium, as well as Internationally?
I think Labyrinth club is very important in for the Belgian scene because they bring the biggest artists such as Richie Hawtin, Chris Liebing, Marcel Dettmann,… but they also book new artists and even though they have many residents they will always give opportunities to other new Dj’s as well. Internationally I always hear from other artists that they cannot wait to play at Labyrinth Club because they heard so many things about it and that always makes me feel so happy and proud.

What has your relationship been with performances in Croatia? How do you find the country as a destination for dance music? What is unique about it? What can be improved?
It’s been years that I wanted to go on holiday to Croatia but for some reason it never happened. I played in Zagreb for the very first time not that long ago and I loved the crowd, they were very open minded and true music lovers! Unfortunately I only flew in and out for the gig so I did not see much. But I’ll be staying a few days before/after Labyrinth Open.

Aside from Labyrinth Open Croatia, what are some other gigs over the next few months you’re particularly looking forward to? Will you be traveling anywhere you have not been before?
I just got back from my first South America tour, which was great! This summer I’m playing mostly on festivals (Awakenings, Pukkelpop, Tomorrowland, B My Lake, DGTL Barcelona, The Ark Cruise, Dour Festival,…), I’m also playing some club shows in Europe and we are also working on an Asia/Australia tour for end of this year.

Finally, in your honesty, with a promising career, coupled with industry esteem, what do you aspire to being as an artist and DJ?
That’s a difficult one, everything happened so fast that I had to be so focused on the present and I did not have time to think about the future… There are so many clubs, cities and festivals that I would love to play at, the world is so big and so are my dreams! 😉 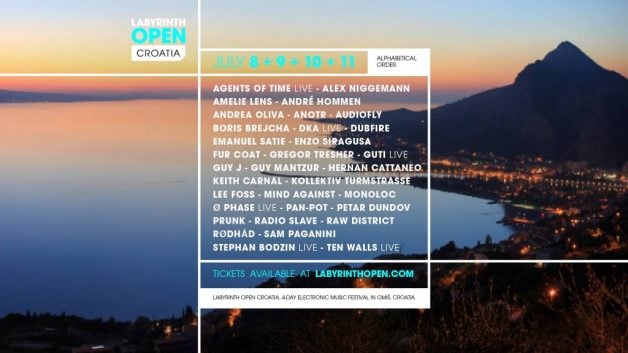