Eelke Kleijn’s music stretches from stretches across the spectrum with incredibly well formed productions, remixes, as well as dynamic DJ sets around the world.

The Rotterdam based artist’s potential seemingly has no bounds. With a career consistently in acceleration mode, Eelke Kleijn has released music everywhere from Sony to Eskimo Recordings to Suara. Recently, he has launched his new imprint DAYS like NIGHTS, reworkied the 2001 classic ‘Shed My Skin’ to much acclaim, while celebrating class gigs around the world including.

On 22 September komm schon Alter will, once again, welcome this true ambassador of Dutch electronic music as he takes to the decks of Annabel alongside Miss Melera, Solee, and Rancido, for komm schon Alter’s “Leading Ladies” event. Ahead, we managed to catch up with Eelke to discuss everything from

“I’ve learned to take my time”

Speaking generally, how has your summer been? Did you travel anywhere you haven’t been to before?
I went to India in June. I had been there before but it was 3 or 4 years ago. It was a lot of fun! I played in Delhi and Mumbai. It was my third time playing in India but my first time getting to see a little of the country since I took some time off as well. It was a nice experience. The scene is small but the people who go to the parties really know the music. You have a small but dedicated audience.

In July I was on the road in Hungary and a tour to New York, Montreal, Toronto, and Chicago.

Which venue in New York did you play?
Schimanski. I used to play Verboten all the time and it was a lot of fun. Schimanski is nice. There is a lot more noise in the club now.

You played komm schon Alter Festival this summer as well. What were your impressions of the event?
Yes, it was in June. It was the day before my birthday. I had a nice spot during the sunset. The nice thing about the komm schon Alter festival is that it’s not too big so you get an intimate vibe. Also, people have to be older than 24 so it gives you a nice variety in the crowd.

Do you find the age aspect makes a noticeable difference from the artist perspective in how you are able to interact with the crowd?
When I started, I was 18-19, which was almost 16 years ago. I would always be the youngest there. This was still the case 10 years ago. All of a sudden, I started playing parties where I would look around and feel like I was the oldest one in the room. It changed very quickly. So, with komm schon Alter, it’s nice due to the mix of people it brings. If there are people there in their 40s, they know what they’re doing. They know what they like in a party.

Talking about your latest release – ‘Shed My Skin’. As it’s a rework of a 2001 track, what was it that originally drew you to this track? What was your starting point when working on your version?The original has always been a favorite of mine. I used to play it a lot back in the day but there aren’t too many solid remixes.  The one everyone knows is by Pete Heller, which got a lot of airplay in Europe but it’s still 16 years old now. In a current set it would sound dated. So, the first thing I thought about was how could I update the track to be more the sound of today. That’s generally how I view remixes. I only do them if I feel I can bring something new. If I listen to an original and there’s something I’m not sure about, I usually don’t do it.

For this track, we received the strings and vocals. I started with the vocal in my sequencer. Then I tried to put a kick down and think of a bassline. I think I spent the first 2 or 3 days just trying to get my groove right. I will come up with a lot of things and will listen to it a few hours then maybe get rid of something. With this track there are only so many things you can do because it has the typical strings and the vocal. If you put the vocal and the strings in the track there are only so many things you can do with the bassline since you still have to play it in key. It really all depends on how catchy the groove is. Once I had that, everything else went pretty quickly.

For a track like this, what would you say the most important piece of equipment was to create it?
I use a lot of things on all my songs. I’ll have my sequencer, Cubase, plugins, and so on. One thing that was unique to this track came from my modular. There’s this sound that comes in about 1 minute in and sticks around for the rest of the song. It was pretty simple but it’s usually the simple things that stick out.

The track was released two weeks ago and has gotten some nice feedback, particularly in Ibiza. Did you test the track out before release? For how long is the average “test” time for you?
For remixes, you often have a set deadline. You will get a remix request and you’ll  have 6 or 8 weeks to work on it. I don’t really like that as I prefer to make something, play it a few times, go back in the studio and make some changes. For my originals, it’s usually over a year. I may play a version for a year and still decide to change something because I think it could be better. When I was younger, I’d often finish something, release it, and then start to play it. What would happen is, 6 months after I would think the track could be much better. With my own music, I’ve learned to take my time but, as I said, with remixes there is often a deadline you are working toward.

What do you have coming up for ADE?
We are doing the same party as last year, where All Day I Dream was in one room and then Satori and I played the second. I played two sets and the reactions were so good we wanted to do it again. Since this year has been the launch of the label, we got the opportunity do do it again. All Day I Dream in one room and DAYS like NIGHTS in the second room. We have Henry Saiz, Sébastien Léger, Martijn ten Velden, and me. All people that have something to do with the label. It’s a cool lineup and Westerunie is a great venue!

Anything else?
On the ADE Thursday I play at Q-Factory for Guy J’s Lost & Found. I think we may be confirming one more but I’m not sure yet.

After all the years do you still look forward to ADE?
Oh yes. Every year. Also because a couple of my friends and I get an apartment and stay for he duration. I’m always looking forward to ADE. It’s one of my favorite events. Seems like of all the conferences in the world, ADE is the most professional. 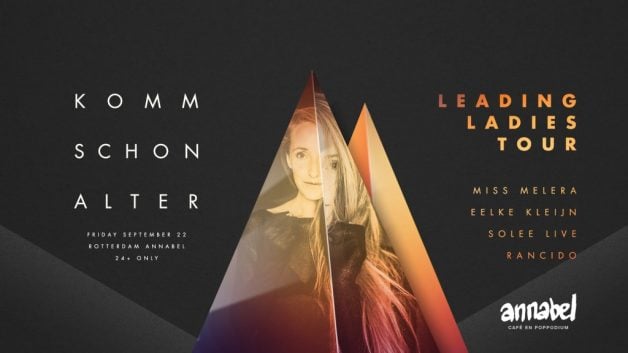