Millennials grew up with their time-abiding melodies. They combined the styles of house and trip hop with alluring vocals and the element of Andy’s trombone into what became a decade of their reign throughout the charts. They were one of the first, among Faithless, Moby, and Massive Attack, who established a dance music act playing with a live set up, and what is now widely exercised by artists like Bonobo, Caribou and Floating Points. But house music is where it all started for Groove Armada and back to its core they have come once again.

Behind the name of this critically and commercially acclaimed dance music act, are two ultimate music lovers: Tom Findlay and Andy Cato. Their roots lie in the musical background of the rough and raw 90s UK raves, soul, jazz and organising parties in Shoreditch. That’s why, after terminating touring as a live act, from 2013 Groove Armada dedicated themselves to spin the decks exclusively. It is not our first interview with Groove Armada’s one half, Tom, thus this time we decided to blend the interview with more background on the present past and future plans of Groove Armada.

In the early 90s in England the spirit was all about raves and get togethers, from there they took the outlook of rather “no theme, just desks, people and music”. The two met at Tom’s attic room in Cambridge “I remember Andy coming in and stooping because he’s about 6ft 8. I’d never seen anyone that big in that very small room.”

From there on, both guys moved to London and started organising and playing at party nights, under the name “Captain Sensual at the Helm of the Groove Armada”, where their moniker originated. “Most of it is just a big blur of having a really good time. It’s more a feeling now. I cycle through Shoreditch a fair bit and see warehouses (now offices and swanky flats) that we used to crawl through in order to put on parties. Lots of them.”(Tom). 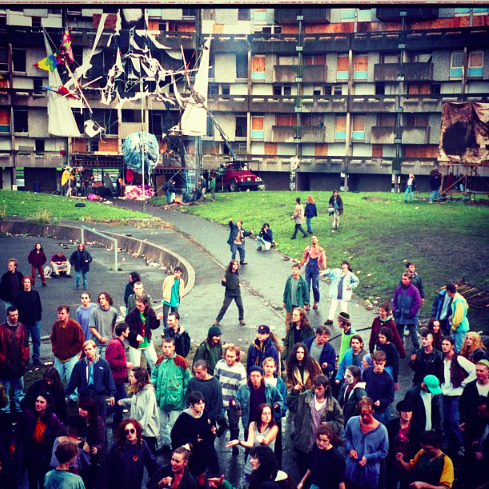 Tom and Andy complement each other with a melodic, generic house sound. Influenced by Andy’s instrumental teaching of trombone and Tom’s musical style, deeply rooted in soul, disco and Chicago house. Generally their broad spectrum can be felt throughout their own productions, the series of Late Night Tales for instance, of which Groove Armada has performed three times as much as their live sets. Aside their spectacular musical career, the duo is famous for voicing and acting upon environmental issues as well as establishing one of London’s biggest music festival Lovebox.

Even at the peak of their career, Groove Armada never did release or firmly establish their own music label. After the first album “Northern Star”, which included the downbeat anthem ‘At the River’, came key label recognition. Their albums on Jive, SONY and BMG sold millions of copies, garnering Grammy and Brit Nominations, but as Andy stated in an interview in 2007, the labels were not giving much support for the non-pop act ideas at the time.

Many big guys have used this as a break point to create a label, but Tom simply answers “The world does not need another dance label.” Instead, their focus now is getting their music on the indie labels they really love: Aus, Hot Creations, Hypercolour, and similar. And so they are doing. Their new album “Little Black book” released on Moda Black in July of 2015 is filled up with brand new tracks by Groove Armada themselves followed by remixes made by Kölsch, Joris Voorn, Huxley among others.

Though he added, initially Lovebox was actually established as a label, but then it “went bust”, later on it became a club, then a festival, which grew into one of London’s biggest ones, held in Victoria Park, with the opening event selling out the capacity of 10,000 in two days when they started.