To understand or in any way wrap your head around who is Roman Flügel would be a difficult task. As he rather speaks through his artistic endeavor than his public persona. He doesn’t shock, doesn’t shout or confront anyone with his presence. Thus, it does make it a special occasion to round a set of questions with Roman Flügel; about his perspectives, Frankfurt as an inspiration, recent album or naming the one-off special dance scenes in the world.

After over two decades’ worth of credits, including plenty of works across and beyond the genre borders, Roman is now recognized as one of Germany’s staple dance music producers and DJ’s. Meanwhile if your ears have not been reached by his sound, then All the Right Noises is a splendid introduction. A conscious step away from dancefloors, and 4/4 structures, resulting in a superb intimate experimentation. 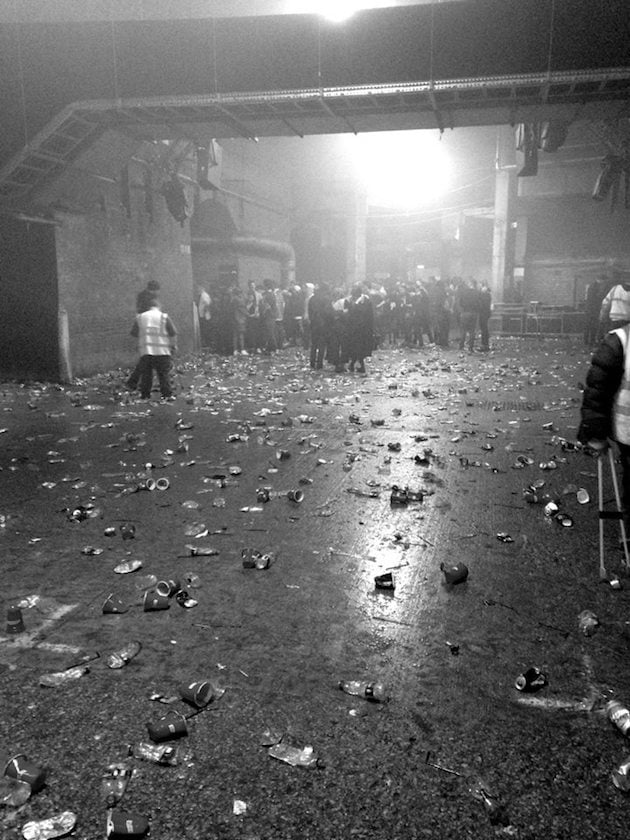 I decided that it would be interesting to browse through the Facebook albums of Mr Roman Flügel. I found one particularly interesting, full of pictures of the neat hotel bedrooms. They seem rather lonely than cosy, or the ones of emptied dancefloors instead of party shots. What is the purpose of this photo diary? What do they represent?

Hotel rooms are more or less a part of my life every week and most of them represent something that is considered ‘functional’ to most people travelling the world. You’d not end up sleeping on a tatami mat outside of Japan for example. I try not to think about what has happened to a particular space before I’ve entered it but I like the fact that it is normally being taken care of and that it looks untouched. When I’m entering the room, and turn the lights on, that is exactly the moment I’m taking the photo then the space becomes ‘mine’ for a couple of hours.

Speaking about empty dance floors after the party is finished I like it because it’s almost like awaking from a dream. A party can be a very artificial production with all the lights, sound, substances, etc. that easily kicks you in a different dimension. As soon the place is cleared, bright lights bring back what is normal. Including plenty of trash that has to be taken away by someone else doing a very different job. I think that’s a beautiful moment.

“Producing dance music is playing by the rules because there are a few things that many expect from a track that ‘works’. I’m trying to find solutions or ways of expressions that can be a little confusing in the beginning and that’s just because I like the feeling I get from it during the making.”

To our last Instagram series, you spoke about Lou Reed as your inspiration, I also know that you called your new party series after a song name of another rock legend Iggy Pop. 2016 has witnessed the passing of several seminal artists of the same era. How has that touched you? Your observations/ creativity? Do you think there are artists in the dance music scene of a similar level of creative influence/ heritage?

Good question. It’s true some of my favourite artists have passed away recently including Prince and it hit me hard. I think what made them so special is that Bowie, Prince and Lou Reed were crossing artistic borders and re-defining what a music genre could be by not playing by the rules. They were creatures beyond people’s imagination and became extremely influential by representing a certain way of creative freedom for many.

On your recent album, All the Right Noises, you often bypassed 4/4 structure (most notably probably in the ‘Deal Idols’ where it sounds as if you mixed two tracks with two different rhythms on top of each other). You even commented “It is an attempt to dissolve the musical pulse, or blurring it at least “. Why did you feel the need to go astray from the structure?

I guess because I’ve heard that pulse a million times before and I wanted to add something different. Producing dance music is playing by the rules because there are a few things that many expect from a track that ‘works’. There’s nothing bad about it and it doesn’t say anything about the quality of a particular track if it works well. But I’m trying to find solutions or ways of expressions that can be a little confusing in the beginning and that’s just because I like the feeling I get from it during the making.

How would you describe the journey you are taking the listener on “All the Right Noises” to? Where or maybe even how is this album best listened to?

I’m not giving out advises. As soon an album is released it’s the listeners property and he or she can think and do whatever is preferred. I can only say that all of my albums are not just a random collection of tracks. Usually it takes some time until the music is put into an order that makes sense to me. To create and release tension can be an important aspect in that process.

Last time we spoke to you, you said Japan had one of your most favourite club scenes, because due to its low-lighted clubs it has a deeper focus on the music itself. What other obscure or interesting scenes have you come across in your career and why did they interest you?

Mentalities are still quite different these days. What has become more equal is how people react to electronic dance music because you can watch the same pictures and videos that are spread via the Internet in every corner of the world. That means that an after hour in Bogotá can look pretty similar to one in Berlin for example. I was recently playing for ‘Magnetic Fields’ in India. It’s an amazing festival happening in a beautiful palace surrounded by a small village in the middle of nowhere in Rajasthan. It was exciting and intense.

The difference between the party situation at the palace and the village was profound but I was told that people from the village were actually asking to extend the festival because they benefit from it.

“Bowie, Prince and Lou Reed were crossing artistic borders and re-defining what a music genre could be by not playing by the rules. They were creatures beyond people’s imagination”

In comparison to many other DJs you have not changed your home location, neither to other country nor even moved to let’s say more musically renowned cities in Germany, like Berlin, Hamburg or Koln. What has kept you so faithful to the industrial, so called business-capital, Frankfurt?

Frankfurt is a very good hub for me these days because of the airport. But that’s not all obviously. When everyone was moving to Berlin by the beginning of the century I was still running the labels Playhouse, Klang Elektronik and Ongaku together with Ata, Heiko and Jörn. We didn’t want to move the company to another city since the sound of Frankfurt shaped what we were standing for.

The Rhein-Main area had a strong scene of labels, Dj’s, Record shops and Clubs since the late 80’s and with the opening of the Robert Johnson in Offenbach back in 1998 we also had a fantastic club to hang out.

The scene suffered for a little while when some of the bigger names like Zip or Ricardo Villalobos decided to move to Berlin around the year 2000 and when our labels finally went bankrupt around 2008 it was definitely a good chance to hide into another city. But it simply never happened. 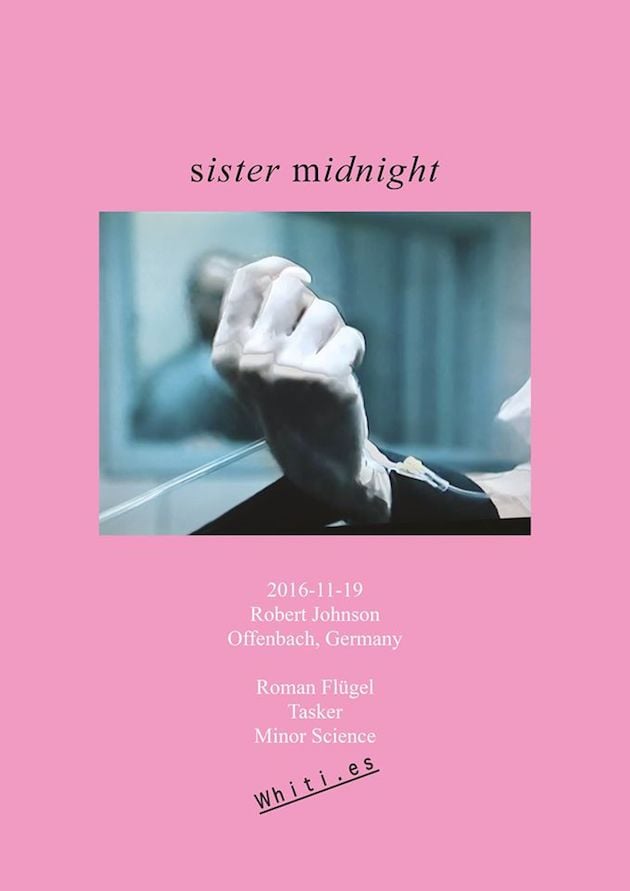 How often do you get to explore/ observe the club scene in Frankfurt? Is it in any way different than elsewhere?

Today I’m not going out in Frankfurt too often since I’m always travelling but there’s some great young people who keep the scene alive.

This year you have decided to curate Sister Midnight – your new party series in Paris, Barcelona and Berlin. Why these cities? Where did the actual inspiration came for it and how was it meant to be different from the rest? DJ you succeed to fulfil that?

The name Sister Midnight is inspired by the brilliant sounding song of the same name from Iggy Pop. I’ve always liked the title because no one really knows who or what Sister Midnight is. A few years later David Bowie made a cover of the song as ‘Red Money’ but with different lyrics. I like that idea too. The party should be open minded enough to present a wider range of music from Dj’s or Live acts I like and I take care of the line up’s. In the first-year Sister Midnight mainly happened at places I’ve played before like Panorama Bar, Robert Johnson, Nitsa or Village Underground. There will be more parties in 2017 and the release of an exclusive Sister Midnight T-Shirt soon.

Probably every artist has had his/hers not so commercially successful, however artistically rewarding projects. In your long-lengthy career, there had to be a few. Which ones would you highlight?

Definitely yes, and more than the one, that became commercially successful. I still think that my album for David Moufang’s Source records label under the name of Ro70 is worth listening to.

How important are album reviews to you? What has been your good and bad experiences with the music press?

I think it’s great in general if someone takes his precious time to do an album review! Some of them I read and some of them I still like even though the critic doesn’t like the music. It depends on how it was written.

What artists do you advise to keep an eye on in the upcoming year?

I would recommend a crew of Frankfurt based Dj’s and producers named ‘Hard Work Soft Drink’. They are definitely worth checking.

What do you have coming up next year?

There will be a 12” for the infamous label of the London based Phonica record shop soon.