Love, sex, religion, politics and death – have been the main themes of the songs he wrote. While some are devoted fans, some, as Huxley tweeted this morning, have not been aware of how many songs of the legend poet, singer and songwriter Leonard Cohen we may have known till this day of his death. Despite on which side you stand, this man’s musical legacy is a never-ending inspiration, thus we saw it necessary and fit to pay a tribute in our own way.

Another legend who died this year with releasing their last breath along with a creative impulse. Just like David Bowie gave his last breath right before his “Blackstar” was out, Just last month, Leonard Cohen released his beautiful last album “You Want it Darker“. Cohen himself enlisted the Berlin producer Paul Kalkbrenner to do the rework of his lyrically bleak track “You Want It Darker” (listen below along with the original).

Best recognised for his baritone, which lacked polish but rang with emotion, Mr. Cohen though did not like stage performances as he loved writing and composing. His songs had a certain dark gloom, but his poetry came from a place of playfull realism. “I don’t consider myself a pessimist at all,’ he told the London Daily Telegraph in 1993. “I think of a pessimist as someone who is waiting for it to rain. And I feel completely soaked to the skin.”

However, the closest you’ll get near him is by listening to his songs or reading the lyrics. Cohen could carve in lyrics about ‘giving a head in a limousine‘ in a love song or partway between philosophy and prayer. His most famous song was ‘Hallelujah‘, which contrary to what many might think was, as he claimed, a disguised attempt to give a nonreligious context to ‘hallelujah’, an expression of praise.

But remember when I moved in you
And the holy dove was moving too
And every breath we drew was Hallelujah. RIP #LeonardCohen #anotherlegend

And while your mom and granny might be howling the chorus, there is a part that blatantly says: “She tied you / To a kitchen chair / She broke your throne, and she cut your hair / And from your lips she drew the / Hallelujah”. Poet once mentioned it was about trying to make a secular world understand spirituality better. “I wanted to push the Hallelujah deep into the ordinary world. The Hallelujah, the David’s Hallelujah, was still a religious song. So I wanted to indicate that Hallelujah can come out of things that have nothing to do with religion.” (source: Sunday Morning Herald).

In these times of political frenzy, his song “Anthem” portrays the most meaningful message for our troubled and troubling times: “There is a crack in everything, that’s how the light gets in.” Could be that the song he wrote after the Berlin Wall, about the misguided view that Democracy is coming to the East, today is working in a reverse: “Democracy is coming to the USA/ It’s coming through a crack in the wall”. It is not surprising, Cohen had a certain view to the world order, being jewish in his origins, he was also an ordained Zen Buddhist monk If not for curiosity, then for a great lullaby, listen to Mr. Cohen narrating a two-part documentary series from 1994 that explores the ancient Tibetan teachings on death and dying).

However, accidentally symbolically, this years’ personal pledge of the poet and troubadour is a truly inspiring one for all. Bloviate less (ˈbləʊvɪeɪt/ – talk at length, especially in an inflated or empty way): 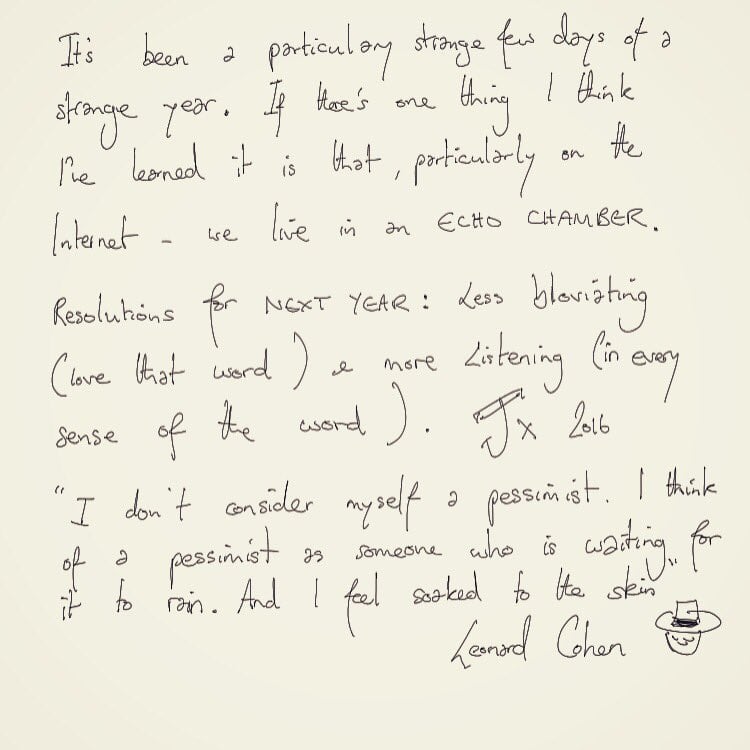