FUSE London’s core philosophy is simple: to stand out from the crowd by hosting exceptionally high-quality raves, emblematic of superior-technical standards of sound design, and a close-knit core of residents.

Over the past few years FUSE has enjoyed its success directly attributed to this philosophy, especially from the likes of the FUSE core family: Enzo Siragusa, Seb Zito, Rich NxT, and Rossko, and with the implementation of its label, FUSE London, the family were able to find a home, as well as reach out to artists who each share in this core ethos.

As an event, what began in East London has built its way to become a well-respected and recognized event across the clubbing capitals of the world, making the original FUSE Sundays a verifiable staple in the London dance scene since 2008.

Now, on 30 July, FUSE packs the family in and heads to Studio 338 for an epic day/night celebration for the 5 year anniversary of FUSE London. Going down at Studio 338, Enzo, Seb, Rich and Roosko will all be on hand alongside many, many more. 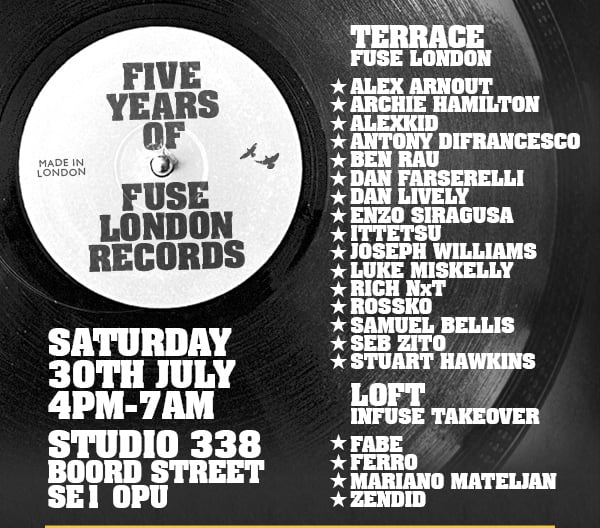