For anyone on the ground in nightlife the news may come as a limited surprise, but a new study has found a massive jump in ecstasy and LSD usage amongst young Brits over the past two years.

The study shows that an estimated 157,000 more people aged 16-24 took ecstasy over the past year compared to two years ago, while about 49,000 more used the hallucinogen LSD over the same period resulting in percentage increases of 84% and 175%, respectively.

The average of 40% increase in such drug use will prove to be a devastating blow to the UK governments recent implementation of hardline strategies to curb drug use such as its recent psychoactive substances bill of which the two class-A drugs are among the drug war’s major targets.

Professor Fiona Measham, who chairs a working group on polysubstance use for the Advisory Council on the Misuse of Drugs, has tried to explain the usage increase by stating,“My view is that increased purity from 2010 onwards across Europe is making ecstasy in pill, powder and crystal form increasingly attractive, combined with easy availability and relatively low prices.”

Measham goes on to attribute the rise in drug use to the resurgence of dance music across the globe in a somewhat misguided attribution, “I think now people have got back into raving,” she said. “Really there has been a resurgence in dance music, I’ve seen that in my undergraduates. My students all want to be part-time DJs and promoters.” 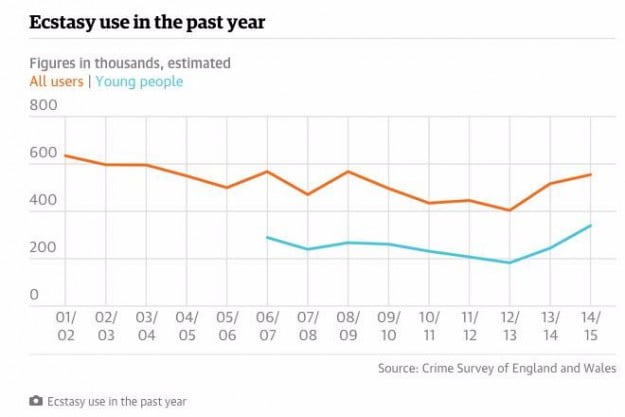