Ruede Hagelstein is the Berlin-based DJ and Producer known for his eclectic energy and boundless remixes who now see’s himself team up alongside Swede Sailor & I on the latest forthcoming METAPHYSICAL release.

Ruede is an artist who’s been a staple as part of Watergate Club as a resident since 2006, one of Germany’s most famous clubbing institutions. Shortly before this he earned an Audio Engineer Degree at the SAE institute and has strong records released across the likes of Cocoon, Kitsune, Bedrock, Get Physical and Culprit.

We speak exclusively to Ruede regarding his latest music, specifically how the linup between him and Sailor & I took place as well as his roots in the scene and what misses most about the music industry pre-covid.

The Life That Kills You alongside Sailor & I is available now.

How has the past year been for you, it’s been challenging for everyone of course, but it would be good to hear your perspective.

From the first shock when realising the dimensions to what it became lately, I have to say I am pretty okay. It took some adjustments, finding new perspectives, but in the end it’s the break, which I never would have taken myself. I discovered classic weekends. Maybe it saved my life. I don’t know, I won’t go back to where I was. Less traveling, less gigs for sure. More taking care about my label and other projects. I wrote a book meanwhile “DJs Are Dead”, where I am telling a story of a DJ growing up in the 90s near Berlin. There is a good portion of me and sarcasm inside, a reflection of our whole scene. I think I pretty much seized the days while the pandemic. I think I am in a priviliged and comfy position. I am sorry for the kids. I am sorry for the people who died or suffer from Covid. I am sorry for the people who worked their asses off in the hospitals. I had my studio, a normal week and I am just thankful.

How did the link up between yourself and Sailor & I happen, you both worked on the production together, in person or was it remote?

We wrote on facebook and met later on in Berlin in my studio. We began to work straight ahead without talking too much, he played keys, I sang and then we both worked on some collaboration tracks. Some kind of friendship was born the day we met, I guess.

You are of course known for your remixes, how did this develop over time and what’s been one of your favourite works?

I think it all started when i remixed Chikinki back in 2006. An indie rock band. I like to put tracks from here to there. From a rock concert to a house club. If the idea of a track is strong enough it could be represented differently. That’s something I like about it. Of course this habbit brings some money in, especially when you can’t play gigs.

You have an Audio Engineer Degree – How pivotal is the design of sound and the tools you use in conveying the emotion of productions?

Audio engineering is very important of course, especially for club tracks. Because the quality of a mixdown shows up significantly when listening to it loud. Making dance tracks is mostly on the flight mixing and the quality of the sound is important to transport the whole idea. On the other side rules can hold you back from being creative. I remember, when I finished my sound school I got stuck for a bit, while trying to be perfect. Sometimes it’s good to break the rules to create new things or just let it go like punk rock. Anyway the idea of a track is most important, that’s why so many artists send their tracks to a mixing engineer. A job, which I have been doing too since a long while and it helped me to survive the corona time too.

How important was becoming a Watergate resident to your development as a DJ, can you talk us through how that happened?

The Watergate family helped me a lot to become an international touring DJ. Before that I was known in Berlin and Germany, I threw a lot of parties in our city, being deeply rooted in the underground. They asked me to join the Club as a resident, which lifted me up from the underground to a higher table of fame.

Before the pandemic I decided to leave the Watergate to find my own way, away from DJing to more live shows and other environments, I made a big step and then the Virus happened. I was kind of prepared for new adventures, this might be special in my personal case.

What have you missed the most from the last year provided there has been limited opportunities to perform at gigs and clubs, if any at all. Is it the fan engagement?

I am missing my friends from all over the world. I met so many people over the years and I was able to meet them regularly, when touring. Of course I am missing the audience at the nightclubs too. The feedback, the moments to share. Playing music out loud. This is special and needed and I can’t wait for the next gig and all those night characters.

It’s known you wanted a rock star career. Do you still look to the idea of this being a possibility?

Haha, when I was a kid I was dreaming of becoming everything I saw on TV. A singer, a football pro, astronaut whatever…. I loved being on stage, for any reason. Just being in the middle and getting all the attention. Over the years I became quiter and I realized that of course a rock star career is too crazy for me, anyways. When on stage, I like to put the music into the focus. Sometimes I would love to wear a mask or just disappear, just sharing my music. I think I am becoming more and more shy. 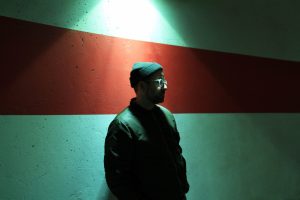 How often do you use your formal training when approaching the production of dance music, would you suggest new and emerging artists to get formally trained?

Training is very important. Exchanging knowledge is the key. When I started making music there was nobody to ask, no youtube tutorial, nothing. Today it is so easy, everyone should use those opportunities. I am watching tutorials often, visiting other studios and keep on asking (stupid) questions.

The collaboration with Sailor & I inspired me a lot to do more pop-influenced music. There will be a lot like this in the future and in the end…. it’s more material for me to remix. 😉