City Sound Project (CSP) 2017 is on the horizon, touching down on the first bank holiday boasting a massive display of music and arts across the picturesque Canterbury.

CSP has been bringing together music from all sides of the spectrum alongside a plethora of cultural and artistic installations. This 29th and 30th of April will be no exception as the brand welcomes the likes of David Rodigan MBE, House Gospel Choir, James Hype and Detlef with Solid Grooves also joining the fray for an exclusive showcase in the historic city.

The boutique festival takes place in unique venues across the city including chapels, castles and ancient theatres and kick-starts this summer’s festival season. We caught up with one of the main organisers Blake McCaskill to chat about the conception of City Sound Project.

“Everything in the city is very old, and unfortunately, they didn’t have raves and parties in mind when planning/constructing 400 years ago!
“

Who is involved with City Sound and when did you come together?
So, the main organisers are me (Blake McCaskill), Stuart O’Leary, Chris Hawksey and Ollie Porter. We were all well acquainted before City Sound Project, but started working on it in 2012.

What are the backgrounds of the people involved? What brought them to putting on a festival?
Myself, Stuart and Chris have all co-run a student events company [Student Republic] for a good few years. We operate a number of weekly shows at University towns – a number of which are in Canterbury. Ollie, at the same time, had been running his own live music shows. Seemed like a really natural link-up.

Why and when did you have the idea? What was that idea? How long did it take to get off the ground?
Well, we were all getting a bit frustrated not being able to ‘book big’ due to the sheer lack of space and capacity of the small venues in Canterbury; there aren’t so many purpose-built venues. Everything in the city is very old, and unfortunately, they didn’t have raves and parties in mind when planning/constructing 400 years ago!

We knew of exciting events like Camden Crawl and Great Escape that were making great use of existing venues/spaces. We figured this was our way to change the mechanics and budgets of our events, allowing us to book much bigger artists than anyone ever had in Canterbury.

It didn’t actually take that long to get the first one up and running. It was a few months of planning, but we were able to lean on current working relationships with local operators and managed to wrestle a cold Sunday in October for the first ever City Sound Project.

You mix up music with art, spoken word, and so on – who programmes it all and who is the audience you aim at?
Yeah, we’ve now developed into a much broader music and arts offering. We collaborate with Wise Words (a Kent-based spoken word festival) and they bring a load of really cool performers in – they programme the spoken word. Ollie on our team books the Live Music and I do everything else (all the DJs, and anything Urban).

What were your main priorities for the festival? What did you want to get right from the off?
We really wanted to create a city-wide party, a real vibe. That was the foremost priority but obviously, we made sure to do it in the safest and most conscientious way possible. Canterbury’s a really compact city and there are residential properties everywhere, so it’s sensitive.

How have you evolved since you first started?
City Sound Project started with 4 venues and 6 headliners on a cold, wet Sunday in October – because that’s the only way we could get that many venues to all sign-up at once. Since then we’ve gone on to include every major venue and event space across the city for an entire bank holiday weekend. We now have almost 200 acts across 22 stages/venues.

What have been the hardest things to get right? What challenges have you overcome?
I’d say programming. When you have 22 stages to programme, minimising (and sometimes strategically orchestrating) clashes can be really hard. Making sure to maximise the number of people that can watch each of their desired shows/sets. We reckon we now understand and can predict people’s movements over the weekend and have it as close to right as is possible.

Tell people about the amazing venues you use, how did you get permission?!
Yeah, so I mentioned earlier that Canterbury’s a really old, historic city, which presents certain problems. However, it also means there are some really interesting and unique spaces. Among the most amazing is a 13th Century Chapel that straddles the river Stour, the Westgate Towers – a medieval monument that was the original gate to the city, and the Westgate Hall – a World War 1 Drill Hall, which now acts as our main stage. None of these are usually music venues.

What are you most excited about this year? What should people come to see?
Generally, it’s all the super-exciting new music. We’ve got some awesome talent playing. But the one I’m personally most excited about is David Rodigan (MBE) on the Saturday. That’ll be pretty special.

Tell us about the secret sets aspect – why do you do that? Who has done them in the past?
We started the ‘Secret Sets’ about 2 years ago. And they’re awesome! Basically, headliners play a set somewhere really cool that’s not listed on the programme and we announce about an hour before it happens through our CSP Smartphone App and Twitter. People get seriously hyped – some feel like a flash-mob! 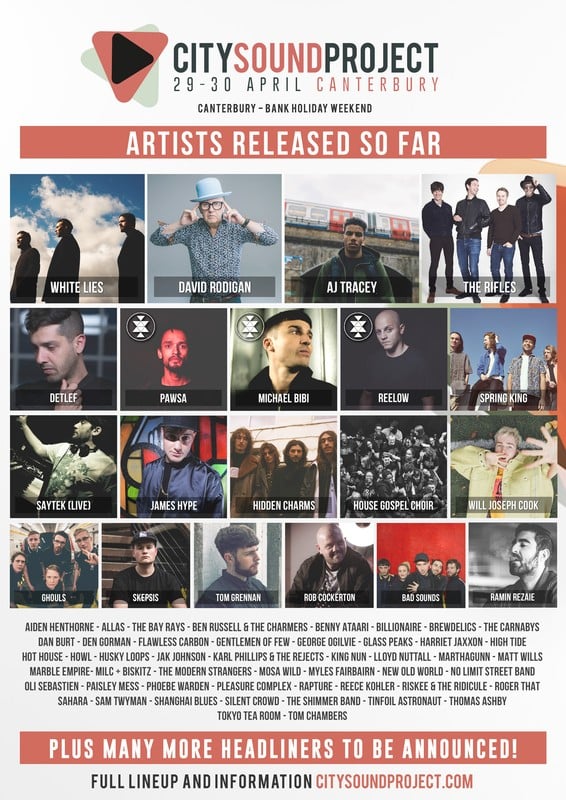