This beautiful piece of the Kent countryside will host at least six stages of incredible music, an array of the finest street foods and bars and a huge family arena. Events take place May 26th – May 29th. The promoter Mark Davis or ‘Chinny’ to the clubbing world and Nicky Chanot have re-located from their original Blackpool routes to offer us a sublime menu of talent and here we chat to ‘Chinny’ about this summers outing and their ethos on todays bustling festival market.

Who is behind Alfresco Festival and how did they come together? What experiences do they have?
Myself Mark Davis, otherwise known as Chinny to clubbers up and down the land and my partner Nicky Chanot. Alfresco used to be just a day long event that was thrown together by myself in Blackpool, it was an excuse to set the decks up in the sun but also have my children there along with my friends also. It grew quickly and over four years we had the likes of Andrew Weatherall, Sh*t Robot, Mr Scruff and many others play there. It was at this site that i met purely by chance my partner Nicky, she was hosting her own Mediterranean food stall and was interested in the event as A Love From Outer Space was on the line up. Anyway nearly three years down the line the event has turned into a full three day festival and totally moved down South. We’re both really enjoying the festival side of things as i myself have been a club promoter for twenty years in Blackpool, Manchester and Leeds and this was like a new lease of life. We also have Ian and Jonah Considine involved now of Nein Records and their help has been invaluable and obviously having a great label involved is fantastic

What was the idea and plan for the festival from the start? Was there a niche you were looking to exploit?
The initial idea of the festival was to be family friendly and to include cutting edge underground music. I have always felt there is a need for this kind of event, clubbers get older, have families and still enjoy going to parties so why separate the two ? We are finding its working fantastically well and what we are also loving is that many people come without kids too. We attract a fantastic loyal crowd of all ages and because we are small and also dont really book commercial names we get just the crowd we are after, serious music lovers of all kinds and ages. At any one time you can find some fantastic disco and balearic fun in the sun or a straight up acid house party in the trees, we cater for all.

How hard was it to realise that? Did you have support from the council and police or was it always a battle for example?
Well i’m not to lie the council in Blackpool were far from helpful but now we have moved to Royal Tunbridge Wells we have had nothing but support. We are seen as an attraction to the town and the backing from police, council, local businesses and all other official parties has been amazing. We are a genuine family friendly festival so we deserve support but once people see our line ups they know exactly what to expect musically, its a win win.

How will it be different this year, if at all? What’s new, what have you learnt?
You are always learning and last year was massive for us. The fact is though everyone that came had a great time and whatever problems occurred they were dealt with and not too much hassle. Staffing is key and next year we have more paid staff, more volunteers , more time to plan and we’re confident we’ll deliver a great festival experience.

Who decides on bookings and what are they based on? personal tastes, what people want, DJs who will sell or what?
The bookings are mainly down to myself, i have always programmed my own events and yes they are mainly my own personal taste. My taste though is very varied and we have a collection of people that we like to work with regular but its important to have fresh headliners every year. The headliners are picked to evenly attract young and the slightly older crowd and keep all happy. There is talent on show from many different genres and we like to think whatever you are into you’ll be able to find it somewhere at any time of the day. We don’t just book DJ’s that sell tickets at all, thats the promoters job. Its great when we see acts promote what we do and obviously some are more popular than others but on the whole i think our line up is as solid as any other small festival, and only in our second year too.

Tell us about the different stages on offer – what are they about, who do they cater to?
There are two stages within the main family area and the main stage also stays open late once the kids have all disappeared. We have two stages in the woodland area too, both playing different sounds and probably more of an adult festival experience. Some of the larger concessions and bars will have DJs playing also throughout the day and then late at night we have a night club stage that only opens at 8pm as well as the main stage, both open until 3am. We also have a roller disco stage for the kids that will act as a silent disco too at times plus a family arena with incredible entertainment all day for the whole family.

And you have some decent food offerings right – tell us about that, who you have got involved and why…
The food is amazing, we have just enough choice whilst not swamping you with options. We have a fantastic Thai stall offering great curries and spicy treats, a Mediterranean stall with paella and chorizo stew amongst other great dishes. We have a great Pizza bus thats makes fantastic stone oven baked pizzas complete with its own little stage upstairs, everyone love a disco pizza party. Brighton’s BBQ Shack are now involved and they have been at many festivals as well as catering for Felix Dickinson’s wedding so he clearly loves their BBQ. We have The Cheese Truck also this year, the best cheese toasted sandwiches on the festival circuit without questions. Pie and Mash from The Gourmet Griddle using fantastic pies made in Kent exclusively. Then there are coffee , fruit juice, cakes and ice creams etc as we once again cater for the young and old and sweet and savoury equally.

And about the site, what is it like, how did you find it, how much work is it to convert it for the festival?
We’re so lucky that we have this site, purely by chance as a previous site lost its license. The site is based around a lake that surrounded by a woodland area and has rolling fields all around that make great campsites. The site itself is just so picturesque that it only takes a few weeks of general construction and then decorating to give it the Alfresco feel. This year we have many plans but we also dont want to spoil things by letting too much out of the bag, i will say that it will be an incredible step up on our first year and we cant wait for the films and photos to appear. Our host of the land Dan Tranter organises the site throughout the winter incredibly well and the drainage and conditions are fantastic.

What are you most looking forward to about this year? Whats got you most proud or excited?
In all honesty just the festival itself becoming a success. Its a very stressful life being a promoter and the expense is huge however its something Nicky and i are massively passionate about and i want the mix of festival goers and kids to work without dumbing down the music. How can we go wrong with Gerd Janson, Optimo, Psychemagik, Crazy P Soundsystem, Paranoid London and Alexis Taylor involved? I’m proud of the whole organic growth of Alfresco and excited every year to see how exactly it has. 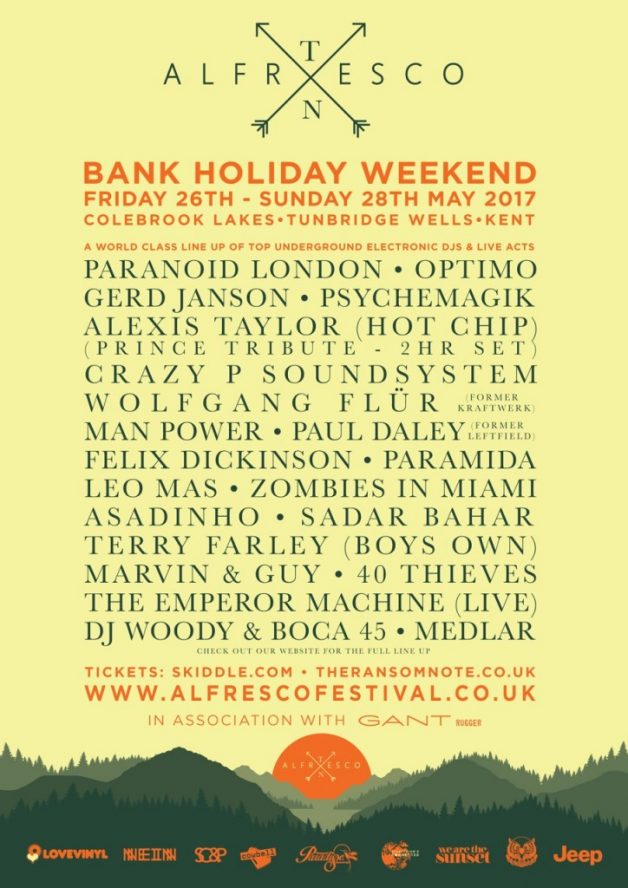