There are few promoters in the electronic music industry that are pushing the boundaries in the same way as Moody Collective.

Their origins stem from a genuine love for music and the clubbing scene in Madrid, and over time they’ve built a promotion team that really knows how to put on a party. There’s no genre of dance music that Moody Collective don’t delve into at some point, making a point that the ethos of the company lies within the atmosphere and sound of the events.

Now branching out into other areas of Europe and entering their first summer festival into the equation, we caught up to have a chat about what makes Moody Collective tick.

“The sound evolves as we do.”

So we know you were inspired by the vibrant bar-scene in Madrid, but how did Moody Collective come to be? How did the conception process progress at the start?
Back at that time we thought Madrid had too much synthetic techno. There weren’t enough events with Soul, African, House or Disco music. We tried to change that game up. We gathered a list of bookings we wanted to book, but considering our initial budget constraint we just tried to fill a niche by gathering like-minded music heads behind the decks.

What sort of venues were you targeting in Madrid when you were kicking off? Were there any instrumental locations that really helped develop the brand?
We started in the tiniest of bars with a crazy light system called Stromboli. The walls were made up of square light panels that could be individually manipulated. It was like a weird 70s kids-party vibe, which suited us! It closed down pretty quickly but we used to ram the place full till the early hours, normally finishing up with gospel house tracks. It was tiny an intimate, like the best kind of events.

Did you have a clear idea for what sort of sound you wanted Moody Collective to represent, or was it something that naturally grew over the years?
The Collective is essentially a group of 6 friends, who represent similar but different music tastes. The sound evolves as we do. People want be shocked here and there – be it the Salsa track for sunrise sandwiched between old school Detroit bangers or some rare afro tracks mixed with quality garage.

You’ve made efforts to develop the brand into a radio show and most recently record label, was this always the plan for Moody Collective?
The radio should defo get more credit; our different sessions are absolutely killer and across the whole music spectrum. We didn’t originally plan any of this, especially the record label, it all felt like natural progressions. We’re surrounded by some very talented young producers, be it Clemens K, the Lehult crew, or David Triana (Dorado), which inspired the conception of Moody Collective Records.

You’ve had lots of great bookings and collaborations in recent years, was there a particular point which you noticed Moody Collective was growing as a brand?
I think our move to throwing Berlin events was a turning point. We were then able to work with better budgets and artists. We’ve got a very loyal crew who we’re indebted to. We have to keep exciting them with crazy new locations and pushing the boundaries. They definitely keep us on our toes. We see ourselves differently from other ‘promoters’ as it’s not a full time professional for us, it’s a labour of love. To keep things interesting for ourselves we constantly change venues and locations. Our parties need to be good enough for ourselves to want to go!

Was it easy to keep the Moody Collective ethos when you branched out to other cities like London, Berlin and Istanbul?
Istanbul was the craziest, we managed to forge an incredible group of people that loved their music and went for it. We’d throw 3 events over a weekend and have drones of friends fly out. The boat party on the Bosporus with Istanbul and the big eastern sunset as a backdrop was standout. Also, we’re forever indebted to Minimüzikhol, one of the most special clubs we’ve danced in and the greater Mini family, especially Kaan Duzarat. We really hope Mini and the underground industry as a whole can keep strong in these recent tough times.

There are a few events in the pipeline but particularly you’re hosting House of Vans with Farley Jackmaster Funk, could you tell us more about the idea behind this and what people can expect?

We’ve been lucky to have been offered the venue by Vans. It’s actually came around because the head of marketing for HOV, Blanchy, came to our first mini festival (Wakana) and loved the vibes. Normally House of Vans has huge rock/indie acts, we’re one of the first electronic promoters there. All the ingredients are in place, cracking lineup, amazing venue and its free!! Don’t get much better to be honest. London has one of the most forward thinking and diverse music cultures in the world, we’re looking to contribute to that. From legends like Farley Jackmaster to the 22a crew’s new live orchestra and Panorama bars regulars Soundstream, we’re feel it’s a special lineup.

You’ve also got the UVA Festival debut on the horizon, was it difficult to secure such a unique and picturesque location such as Ronda?
Again we’ve been lucky to find the venue, without doubt one of the most special in Europe. The challenge is always figuring out a plan to work with the local governments, as Spain has autonomous regions. The Ronda council understands our vision and have backed us. We’re involving the local communities as much as possible to start a something long-lasting and unique to Spain.

Is there any exciting news in the works for Moody Collective that you could divulge? What does the future hold for the brand?
After the festival we’re going to really focus on the record label for a few months. We’re finding very talented young artists to showcase them. Some real fire in the pipeline. 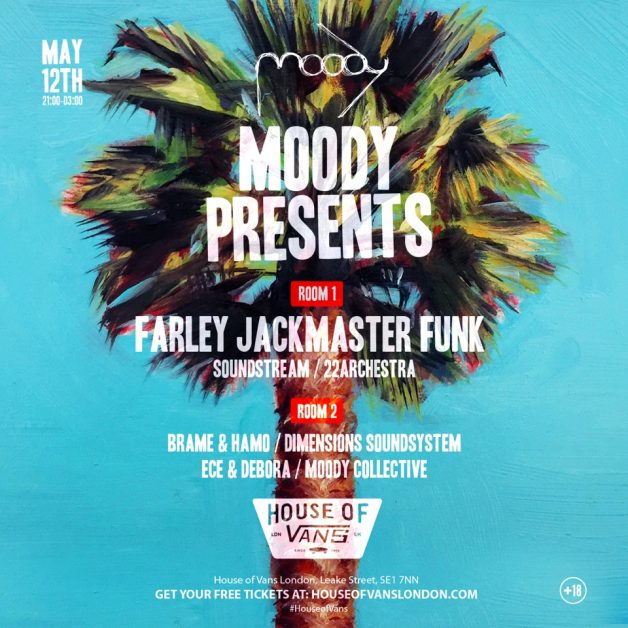