Paul Jack is one of the directors at London Warehouse Events (LWE), one of the capital’s biggest promoters. They hold events at huge spaces, such as Tobacco Dock, while also managing events at smaller venues and also handling the promotion/organisation of parties for big brands such as Red Bull Music Academy. Their prowess is unquestionable and their events always hit the mark, so we caught up with Paul to talk about all things LWE… 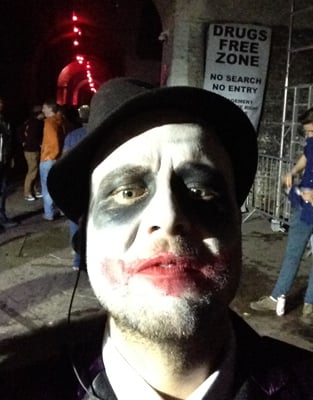 At work on Halloween … Paul Jack

Tell us a bit about how LWE has evolved and developed over the last few years?
We’ve continued to find new and exciting spaces to work in, most recently The Steelyard in Cannon Street and, before that, Tobacco Dock in Wapping. LWE have also produced the RBMA Carnival party for the last two years creating a “Jamaican Shanty Town” at the Notting Hill Carnival under the Westway. And we also produced the Tribal/Disco Red Bull stage at 2014’s Bestival. One of the highlights of that weekend was the amazing crowd the stage brought in for DJ EZ. On top of that we’ve done Brixton Academy with RAM Records, a new concept called ‘Taken’ with Hot Since 82, and many other one-off events across the capital and beyond.

And fill us in on your role within the company…
One of the directors, who heads up the marketing side of things.

How did you make the connection with Tobacco Dock? Did it take a lot of work to convince them to let you hold events there?
The guys at the venue were very welcoming to our ideas, and we hold a strong relationship with them there. We are now the exclusive music promoters at the venue, and we think we’ve nailed a lot of the production side of things now, and love the versatility of the space.

What did you learn from the very first event you did there in terms of logistics etc…?
We learned that it’s an amazing space, and our team love working there. That said, we’ve had to work closely with the local council and community to operate respectfully in the area, which is really important to us and the venue. We’ve learned a few lessons on the way in terms of layout, and are always taking on feedback from customers to make the events as best as possible.

In respect of your experience, what were you most excited about when you first got the go-ahead to do an event at Tobacco Dock?
Getting our hands dirty and planning some production elements that we wouldn’t be able to achieve in other spaces. The main room has a lot of scope to do different things and the car park is the a great place for banging techno. We were also really excited about the line-ups, and the type of acts we could bring in to a venue of this scale.

And what did you find most daunting?
Trying to sell more tickets than we had done ever before, and hoping that we could achieve the necessary sound levels without causing disturbance to the residents in the area. Promoting is basically calculated gambling.

Would you mind sharing a story about something that’s gone wrong at an event, no matter how trivial that’s changed the way you do things now?
When Jack, who does our artist liaison, first started he took a someone who he thought was an MC and a group of their mates backstage and wristbanded them all up with stage access bands and gave them one of the artist’s riders. It turned out he was just a random guy and not the artist!

There seems to be a fair bit of healthy competition within the London club scene, how does this affect you guys?
We get on well with a lot of the promoter’s in the city and generally we all have a good understanding between each other. We work quite closely with The Hydra on some events and a few others, too.

Which other promoters do you admire most? And which do you identify as being a direct competitor?
Anyone who can do little promo and sell an event out! And anyone who is putting on an event in London, to be honest.

What’s your opinion on the London ‘scene’ in general? We’re losing a lot of club spaces, residential/business property is affecting those that are left… however, more and more people are out and about. How does this affect LWE and what could be done to make things better?
I think it makes producers and promoters more creative when seeking out exciting spaces and trying different things.

You’re part of the NTIA, can you tell us a bit about that and what the plans are with it in terms of London’s nightlife?
The NTIA will be a body that represents promoters and producers and the issues that affect us all. Instead of event organisers fighting the same battles with the council and police individually this will be a more formal organisation that will represent the thoughts of the community as a whole.

Tell us about one of your most memorable recent events… An event that really gave you a huge amount of satisfaction.. and why was that such a great event? (in your opinion).
At LEAF on 7th March, there was a particularly epic moment when Pan-Pot started. Just before the set started the whole of the audience in the car park at Tobacco Dock sat down, and jumped up as the first track was brought in. It was totally random and a special moment we won’t forget. The energy in the room was pretty special that day when the Second State crew took over.

Tell us about Flare Audio and the sound they provide for your events?
Flare audio offer a really wholesome and organic sound which works on all the necessary levels. They’re a great team and continue to get the best results possible at Tobacco Dock. They have also provided the sound for RBMA’s Carnival and the Red Bull stage at Bestival, both sounded amazing! There’s no messing about when Flare are involved.

LWE has achieved a hell of a lot in its time, what are your future plans/ambitions?
We’ll keep putting on events at Tobacco Dock with house and techno’s elite and always continue trying to push the boundaries. On top of that we’ve got a few other game-changing things in the pipeline for 2016. Apart from the big shows we are still passionate about the more intimate parties, which is where our brands Mixed and Closer will hold their own. We’ll also be doing one-off showcases with the DJs and brands we love.

Don’t forget LWE’s Closer presents the debut of Dystopian Night in London on Sunday 3rd May.