The sun continued to shine for the fifth instalment of Eastern Electrics, as crowds of ravers headed to the hedonistic playground, standing tall on the grounds of the picturesque Hatfield House, with a plethora of international superstars spread across seven stages.

Born out of a warehouse on Great Suffolk Street in its earliest days – the Eastern Electrics crew have always been well known for putting on tasty line ups for the ever demanding underground house and techno scene and, for this one-day festival, they certainly managed to create a genre defying and energetic atmosphere for revellers to submerse themselves in the sound of deep underground beats.
This years event saw a mix of well known artists from a broad range of genres, including Seth Troxler, The Martinez Brothers, Skream, Groove Armada, Darius Syrossian, Ceri, Steve Lawler Shy FX and wAFF.

The Switchyard, headlined by Groove Armada brought ravers together boxed in by rustic industrial scenery – providing an eerie look into what could have been expected in the ‘90s during the uproar of infamous illegal raves. Groove Armada brought some classics including their 2008 hit ‘Super Styling,’ creating a euphoric explosion, paired up with the eclectic laser display that shone over the stage as the night drew in. Another act that filled the Switchyard to the brim was the man that has sold millions of records all over the world – Kolsch. Hailing from Denmark he brought with him an arsenal of tracks and dropped Goldfisch as the sun began to set.

Skream headed up the LARGE Big Top this year, and brought with him his incredibly renowned ‘back to basics’ London club night Skreamizm. Skream played everything from well known tracks to unheard and upcoming ones, including a new twist on techno with Ocan Verde’s track ‘Maasai’ and the ultimate classic of ‘Now That We Found Love’ by Heavy D & The Boyz’.

Darius Syrossian brought his forever growing label Do Not Sleep to the Club Stage. Alongside Darius were Bones, Kydus, Matthias Tanzmann, Nick Curly and Huxley. Tanzmann pulled a strong crowd for his 3pm set, as many escaped the blistering heat and headed for a dark tent. The crowd then stayed to catch Nick Curly. Nick is certainly a DJ able to read the crowd dropping an Alicia Keyes remix half way through a selection of upbeat house and techno. Darius lifted the mood in the tent to its highest point when he dropped Underworld – ‘Born Slippy’ and Green Velvet’s track ‘Flash’. This tent definitely supplied a day full of nostalgia – reminiscing on a few years of Ibiza instant classics, taking you back to places like Amnesia and Space.

Steve Lawler brought ViVA Warriors, whicj started off as a label turning into one of clubland’s most rebellious parties. The Warriors crew supplied tunes to a tent that remained at full capacity for the majority of the day, with huge tracks such as Jesse Perez ‘What You Say About My Momma’. The tent was decorated in full ViVA Warriors style, creating that Sankeys underground basement vibe, with its red lasers and all. Lawler also showed that the girls can do it too; picking both Ceri and Cassy for the Viva line up. Known for her releases dropped on popular house label Hot Creations, Wiggle and Viva Music, it was up to Ceri to get the Warriors tent fully warmed up with the opening set. We threw a few questions over to Ceri after Eastern Electrics to hear her take on the one day festival:

What was the best part of playing at EE?
Giving my drinks rider to my little brother and his friends who were out for someone’s birthday. Think they’ve only been to one or two festivals before. Sure if they hang around me long enough they will be doing 5 day benders in Ibiza in no time, (just kidding if you’re reading this Mum and Dad!)

How would you describe the atmosphere?
Really nice atmosphere, the weather was amazing so that definitely helped and the location was stunning too with a magical energy.

I saw your post prior to the event that you were looking forward to playing on the same stage as one of your idols – Cassy, how did it feel when you got to unexpectedly take over from her?
Yeah I love Cassy and have loved her music for as long as I can remember, both as a Dj and Producer. I’m still playing tracks she made over 10 years ago which prove there’s a timeless quality to her music, which is a mark of someone amazing in my opinion.

It felt great, I had to go and do some interviews after my set and wanted to see some friends and check out some of the other tents too, but I made sure I made it back in time to hear her set and was there dancing the whole way through. Then about fifteen minutes before she was due to leave they told me Steve was running late and she needed to leave on time, so could I step in…

I was very surprised but very happy and took over from her with one of my favourite Mr. G tunes, complimenting the mood she had already built up. I am glad it was a surprise because I would have probably been a bit nervous going on after her if i’d had known in advance but because it happened so quickly I just go to enjoy it and the tent was rammed by this point with a crowd who seemed to enjoy it which was nice. 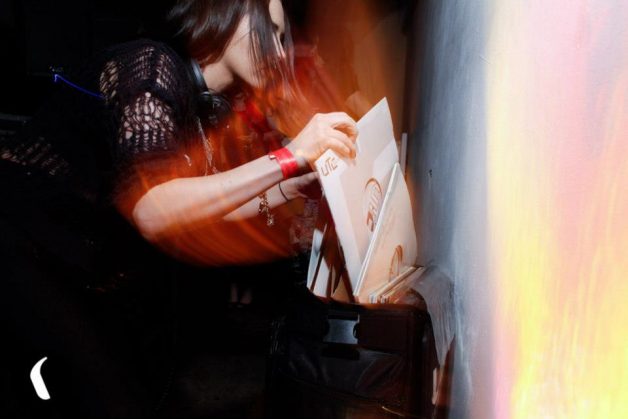