There can be few better ways than to enjoy dance music in the open air. The many different sounds, scenes and styles that come under the house, disco and techno banner all offer up something that feels even more special when bathed in rays – why else would Ibiza be so popular? – and a few parties have tried to capitalize on that in the UK, despite our notoriously bad weather.

What also makes such events hard is finding an outdoor space where you can actually blast music, but that’s just what Vertical have done and will do all summer long with their new series parties. For it they lined up a special residents launch and coming up on May 16th they have UK house duo Waifs & Strays headlining with 2020Vision man Simon Baker and Death on the Balcony. On July 11th Finnish deep house star Finnebassen and italian Pirupa then step up, whereas August 15th sees Purple Disco Machine and a very special London debut from Nora en Pure. As such, the scene is set for what could well be one of the best new additions to the city’s daytime landscape. 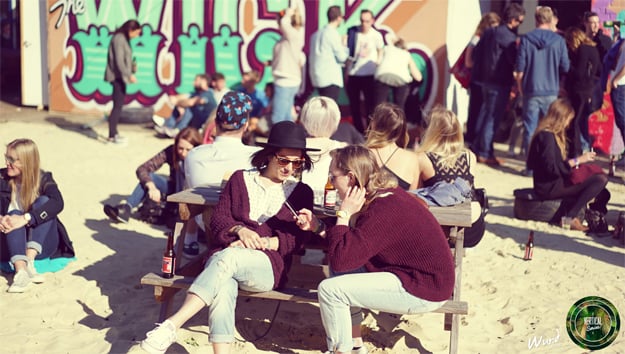 It’s a fine day … outside The Wick

The setting for all this is a converted Victorian bath house that has three different spaces – room for an outdoor, decked terrace, plus a beach, cocktail bars and all sorts of food offerings to stave off the munchies. On top of this, the team behind Vertical have around 100 multicoloured umbrellas circling the DJ booth. As the party progressed people were just grabbing them and raving with them. At one point, the whole room was full of people raving with umbrellas and it made for great scenes.

Thankfully, the weather on this day was great and the sun beamed down for the whole duration, making the thousand or so clubbers in attendance all happy and energetic, hence the great vibes from start to finish. After a fine set that got us going from resident Muzz Khan, Mixmag sent down DJ duo Funster and Tillie who wowed us with plenty of upfront heat, disco dazzle and hefty house beats. Once the sun set, of course, the mood turned and things got more serious music-wise, but no less enjoyable. Playing when the sun set was PBR Streetgang, who dropped some appropriately fitting tunes and really made for some special moments.

Maxxi Soundsystem was up next and got the crowd in the palm of his hand with tracks like Terry Brookes & Aaron Soul – City Life (Carl Craig’s Caya Dub), before warmup man Muzz Khan re-took control and dropped all sorts of London-centric house and garage that really ended things in style. Vertical, then, has already made a great name for itself and with much more lined-up, 2015 is sure to be their year.