SXM Festival has announced the phase two lineup for its highly-anticipated return to the Caribbean island of Saint Martin / Sint Maarten. From March 9-13, the destination experience will give attendees the chance to witness many of the top names in the underground techno and house scene in one of the world’s most beautiful and culturally diverse island locales.

Since its debut back in 2016, SXM Festival has remained focused on booking lineups that showcase a mix of legendary names and emerging acts alike from far-reaching corners of the globe. Some of clubland’s most celebrated selectors and live acts descend on Saint Martin / Sint Maarten annually to play for one of the most loyal and engaged communities of music fans and global party nomads in the world. The result is a breeding ground for musical experimentation and discovery eclipsed only by the beauty of the festival’s host location. 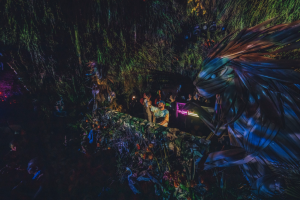 For the 2022 edition, the event will continue to build upon its deep connection with the cultural and ecological fabric of the beautiful host locale of Saint Martin / Sint Maarten. Spawned in 2019 to help encourage the prosperity and health of the island following the devastating Hurricane Irma, SXM Festival created a partnership with SXM DOET.

SXM DOET is the islands’ largest volunteer event, funded by Oranje Fonds, executed by Be The Change Foundation, with the help of hundreds of volunteers. 98 community projects are registered this year. Persons can learn more and sign up to volunteer via: www.sxmdoet.com. In support, SXM Festival will encourage their party-goers to volunteer and take part in this community event. The Festival team will also provide tickets to SXM DOET to help promote their projects through raffles and reward volunteers.

Another initiative focused on the local culture of Saint Martin / Sint Maarten is a musical project featuring Isadore “Mighty Dow” York and his Ebony Steel Orchestra. The group has been rehearsing tracks that combine techno with traditional steel pan sounds. These songs will then be released online with profits going back to the local schools to help with the needs of kids in the area.

Attendees are also encouraged to take a break from the party and meet the locals and other travelers, while offering their service to the island at specific, sponsored projects. Past projects have included beach cleanups, playground builds, and basketball court maintenance, with this year’s charitable action initiatives to be announced in the months to come. 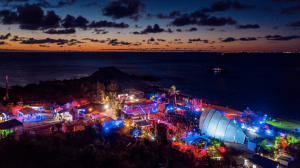 SXM Festival is also dedicated to leaving a smaller footprint and helping replenish natural environments. With initiatives that include going paperless, saving energy with LED and solar lights, and eliminating plastic waste throughout the festival, it is the mission of SXM Festival to become increasingly sustainable throughout their growth. This includes their work with the Saint-Martin based company VERDE SXM. Through this partnership, the festival will have 100% of its waste transformed and recycled. The festival also has a no trace policy: every venue is transformed to be more beautiful at the end of each event.

At SXM Festival, attendees of the 5-day and 5-night tropical dance music escape will find themselves effortlessly navigating secluded beaches, lush jungle dancefloors, stunning villas, boat parties, and beach clubs – from sunrise to sunset. This unique party format is what sets SXM Festival apart from other destination festivals, guiding attendees through an eclectic mix of music, culture, and travel throughout their time in paradise. 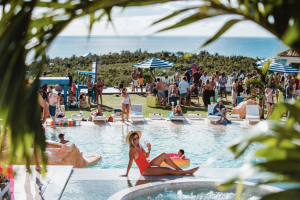 Guests can experience their favorite house and techno artists at a variety of unique venues filled with mesmerising decor. Any SXM Festival devotées will tell you tales of the event’s beating heart, Happy Bay. The secluded private beach nestled in the jungle serves as the main evening venue for SXM Festival and is home to the iconic Arc Main stage and the immersive Ocean stage. Other highlights include Boho Beach Cub, the perfect place to chill out and escape during the day, along with Karakter, which overlooks the Caribbean sea and provides a spectacular view of aircrafts coming in for landing at SXM Airport and is the perfect place to catch a sunset.

Those seeking the VIP treatment can select from a number of luxurious villas, and can also add private yachting, Michelin star caliber dining, and more to the package with a single click on the website booking page. VIP guests will have access to exclusive areas with lush amenities at Happy Bar. This includes table service, a chill-out area, a dedicated VIP bar and special cocktail and wine pop-up bars, and access to the famed Villa Party on Saturday. 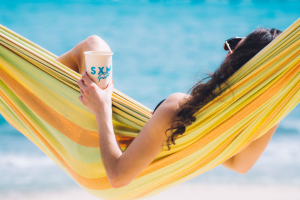 Guests who purchased a VIP pass can also choose to add on the Sunset Boat Party, which includes the option to set sail at sunset on the largest lagoon in the Caribbean with DJs soundtracking the epic voyage. Details for the VIP-Pre Sale will be announced soon.

Whether you are a returning vet or first-timer, SXM Festival and the beautiful island of Saint Martin / Sint Maarten hold rich cultural surprises behind each twist and turn. It is truly a sum of its parts and a musical voyage of a lifetime. Come find out for yourself.

Tickets for SXM Festival are now on sale. Those interested in purchasing passes or learning more can head to their official website.