Lotgenoten – a boutique Amsterdam promoter of various party concepts (like Liefhebbers, Mi Casa Es Su Casa, Carpe Noctem and Nachtparade) – known to connoisseurs for its strong programming, intimate locations and eye for decoration – is celebrating its three year anniversary with a sterling weekender in off-centre underground haven RADION. With a wide array of artists, featuring the likes of Call Super, Dollkraut, Locked Groove, Hunter/Game, Serge (Clone) and Aera, and a specially decorated RADION, this is promising to be quite the escape this weekend.

Lotgenoten started out around 3 years ago – not immediately as a promoter, but as a third party event production collective, which arranged venues for promoters. After building up their network and gathering experience, the organisation decided it was time to take matters into their own hands and start hosting parties themselves.

On the 30th of March 2013 the first edition of Liefhebbers was born. The illegal rave concept introduced a selection of DJs at its debut whom through the years have worked their up the ranks in Amsterdam like Ringo, Nathan Surreal and Paul Caïro. Aside from the house and techno coming from the decks, Lotgenoten tried something unique by incorporating live acts in the programming. The broad musical offer fell in good taste with visitors, resulting in Lotgenoten’s first string of loyal fans that still attend their parties today. The Liefhebbers concept made multiple successful returns until it eventually got a fixed spot at Ruigoord, the anything goes, hippie-esque mini state just outside of Amsterdam that offered a perfect application of the event’s approach

Another concept that Lotgenoten brought forward was Mi Casa Es Su Casa, held at club Nyx as well as at Ruigoord, a party where you could bring your own decoration and furnishing, or just bring along your old couch and give it to a fellow raver after the party was over. Carpe Noctem was another variation in Lotgenoten’s event ensemble, bringing forth a deeper focus on dance music, typically genres such as indie electronica, deep house and techno. 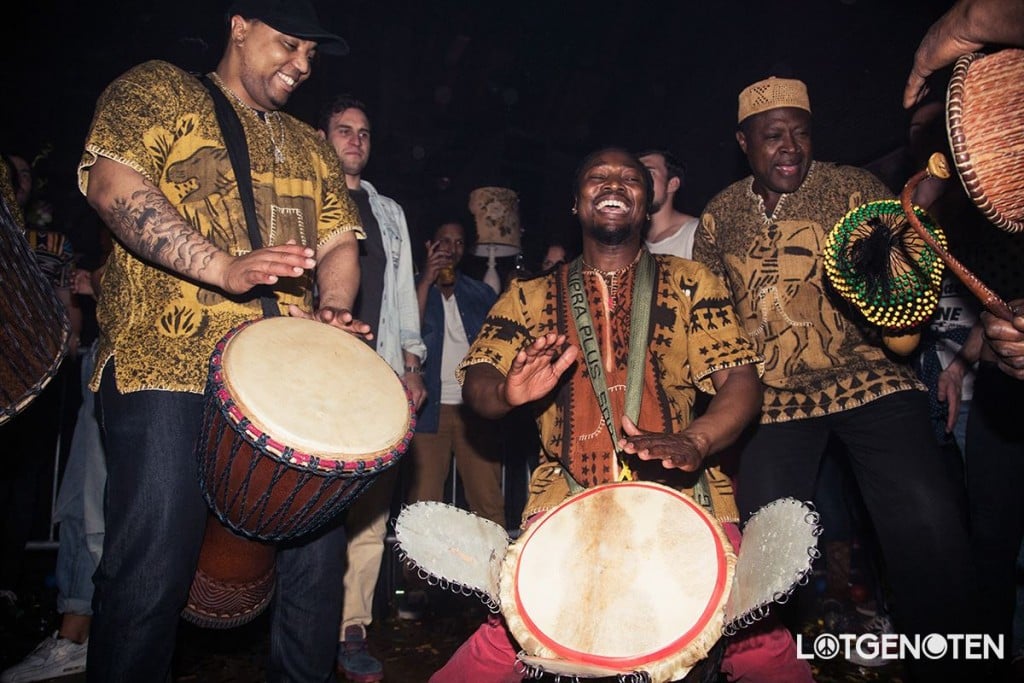 Before long, Lotgenoten stuck its teeth into special festival co-hostings, bringing its production value to such events as Amsterdam’s Open Air, Magneet Festival, Gaasper Pleasure, Graefenthal, and the mighty Fusion Festival with Ruigoord in Lärz, Germany. At these partnerships, Lotgenoten always tries to purvey its philosophy as much as it does during their own parties, says main man Brett Voorzaat: “We want people to forget about the ordinary and start thinking more creatively, crossing the boundaries of exciting, unchartered territory. That’s why we strive to throw the most unique parties, inviting people to share in quality music; all in favour of the total experience.”

On its upcoming three year benchmark, Lotgenoten can look back on a relatively short yet rich history, having built up a span of familiar concepts that have grown dear to many in this city. And not in the least place by creating a stage for unknown but promising talent like Reza Athar, Sigward, Nathan Surreal or Interstellar Funk, as well as solidified names such as Breach, Black Coffee, Jennifer Cardini, Job Jobse, GERD, Alex Niggemann, Detroit Swindle and many more.

This weekend will bring a perfect culmination of the last three years, at a venue that formidably lends itself to the Lotgenoten vision, with a team of DJs that will make it hard to go homeward.