I believe in magic again.

I wrote that in capitol letters in the bottom of my journal entry my last morning at Burning Man. My heart was full of joy in a way I have not experienced before in my life. For eight days I was surrounded by art, culture, conversation, friendship, and curiosity. I’d been to many festivals and I’ve never experienced a more engaged and immersive environment than Black Rock City. On my last day I was excited to return to my home in Los Angeles and take the lessons I had learned into the world. See, I thought I had been underprepared for the experience. I ensured I had enough water, and set an intention for growth, I bought canned food, and cuticle oil so the playa didn’t destroy my hands — I was focused on getting myself to the event and I had not considered what would happen after. Finding myself back in reality this past month I’ve realized what I was least prepared for was decompression.

Finding my way back into my routine after such a phenomenal and eye opening experience has been a process. Very quickly I fell right back into my old routine of waiting tables and watching tv and waiting to “be ready” to move forward in my life. Now, one month later, I am realizing that this routine no longer fits the person I grew into on the playa. Here I examine the way in which I manifested my experience in Black Rock City and how I can use the same process to open up to deeper possibility within my daily life. 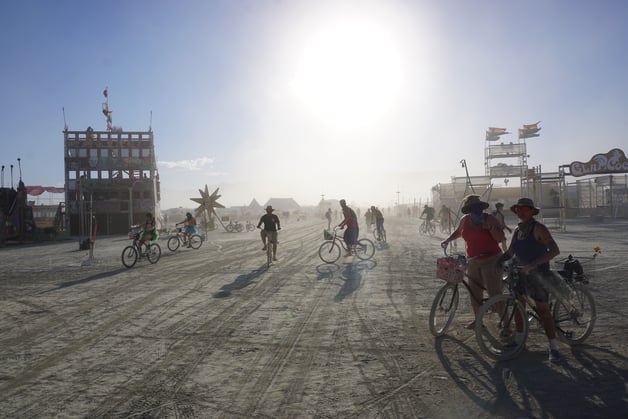 A View From Home

Step 1. To Believing In Magic: Remember You Have To Cast the Spell

I decided to go to Burning Man just six days before the festival began. For over a year I had been daydreaming of attending. I knew and trusted I was meant to go. Yet, I had avoided buying a ticket because I was afraid of being underprepared. I knew people who had spent an entire year prepping for the experience.Could I make this happen in just a few days? Instead of doubting my capabilities I just said “Yes” and took the risk of making it happen.

I asked anyone and everyone I knew who might help connect me with a ticket. I found a couple tickets online but once I checked the code on the Burner website it turned out they were voided tickets. Instead of going the Craigslist route I began asking friends on mine if they or anyone they knew might know of a ticket. I talked about Burning Man with tables at my restaurant. I thought about it constantly. Then, one night out dancing in Los Angeles I met up with a girl I barely knew to listen to some music and Burning Man came up — and suddenly I had a ticket.

I dropped everything and compiled lists and invested in being completely prepared for the Playa. I, also, accepted there was no way to avoid forgetting something. I opened up to learn from the experience and recognized I did not know everything. In this way when I realized I had forgotten something I let it be a lesson rather than a failure. The mentality came from the confidence I found just through saying, “Yes!”

Rolling in the dust before arrival

There is a power in truly committing to doing something. We let ourselves off so easily nowadays. One can simply click “interested” on Facebook and they “maybe” show up. Maybe is not magic. Yes, is magic. Now that I am back I can more actively look at my routine and question: Where am I still living in this mentality of “Maybe”? Then as I recognize it I can shift forward into the mentality of. “Yes!”

But, as I make this shift I must remember that “Yes!” requires action. Not only did I have to decide to be there with my entire soul, I also had to go out and ask for a ticket. Then the most serendipitous events played out and I found my Burner family. I took action and I trusted it would work. And it did. Like Magic. This opened me up to further receive and learn through the experience.

Step 2: Engage in Everything, Be Present, And Insatiably Curious

Burning Man was the most engaged and interactive environment I have ever been a part of. It was no the place for voyeurs but a place for people to truly engage and open up to something beyond self.

One of my first mornings in Black Rock City I had gone out alone to find Robot Heart and watch the sunrise. Once the sun had risen and the music ended I turned from my place in the back of the crowd and started to walk away towards my bike, alone. I felt someone tug on my arm. A man dressed in all white stood before me smiling. He simply said, “Hello,” and then hugged me. He pulled away and looked deep into my eyes. I felt tears well up because I had not felt so seen in a very long time. He allowed me to look at him, to see his joy in simply connecting with me. He put his hands on my arms and said softly, “You feel alone. You’ve been here all night dancing in the dark and you think what you’ve experienced through the music is unique to you. Now we are in the light. Look around. We have all had the same experience. Don’t leave yet. Talk to people. Share. Experience every moment.”

Sunrise at Robot Heart with HVOB