Photo by Pexels / The Pixabay License

Located along the Mediterranean Sea, Barcelona is the second largest city in Spain (Madrid is the first). The city is renowned worldwide for its incredible art and architecture. But it’s also known for its beaches, sunny weather, restaurants, parks, museums, and football team — to name a few.

Thus, it’s no secret that Barcelona is a vibrant and cosmopolitan city with a lot to offer, no matter your interests — it’s a hot destination for international tourists, clubbers, and poker players alike. And it also has a killer selection of music festivals. Here are some of the best festivals and events in Barcelona in 2019:

Since 2001, Primavera Sound has dedicated itself to live rock, pop, and dance music. This year, the festival will take place from May 30th to June 1st; additional shows will be held May 30th till June 1st. Some of the festival’s past artists have included Radiohead, Björk, Aphex Twin, Nicolas Jaar, Nils Frahm, Four Tet, Slow Dive and Charlotte Gainsbourg. Some of this year’s lineup will include James Blake, Tame Impala, Jayda G, Nitzer Ebb, Helena Hauff, Dr. Rubinstein, David August, Peggy Gou, Roza Terenzi, Cybotron, Octo Octa b2b Eris Drew, Avalon Emerson, Job Jobse, Mozhgan, Peach, Upsammy, Veronica Vasicka and Joy Orbison. 50% of this years line up is female, which is a great accomplishment and statement by the festival.

By far one of the most popular festivals in Barcelona, Sónar was established in 1994 to showcase the link between music, creativity, and technology. The festival is divided into two events: Sónar by Day, which is held at the Fira Montjuïc, and Sónar by Night, which is at the Fira Gran Via de L’Hospitalet. Sónar by Day includes concerts, DJs, and Sónar+D, which is a networking event for creative professionals and businesses. Sónar by Night is when the party really starts, with live shows and DJ sets by internationally-known artists. Artists from this year’s lineup include DJ Koze, Four Tet, Kaytranada, Red Axes, Floating Points, HAAi, Erol Alkan, Peggy Gou b2b Palms Trax, Dixon, and Underworld.

Besides Sónar, OFF Sónar takes place at the same time and showcases some of the most popular music brands. It will be held at the beautiful Poble Espanyol, and feature nine parties over the course of several days. The labels and artists at the event representing are: Detroit Love by Carl Craig, Circoloco, Innervisions by Dixon and Âme, Exhale by Amelie Lens and Outlier by Bonobo, among many others. As for the closing party, DJ Carl Cox is confirmed with more artists to be announced. 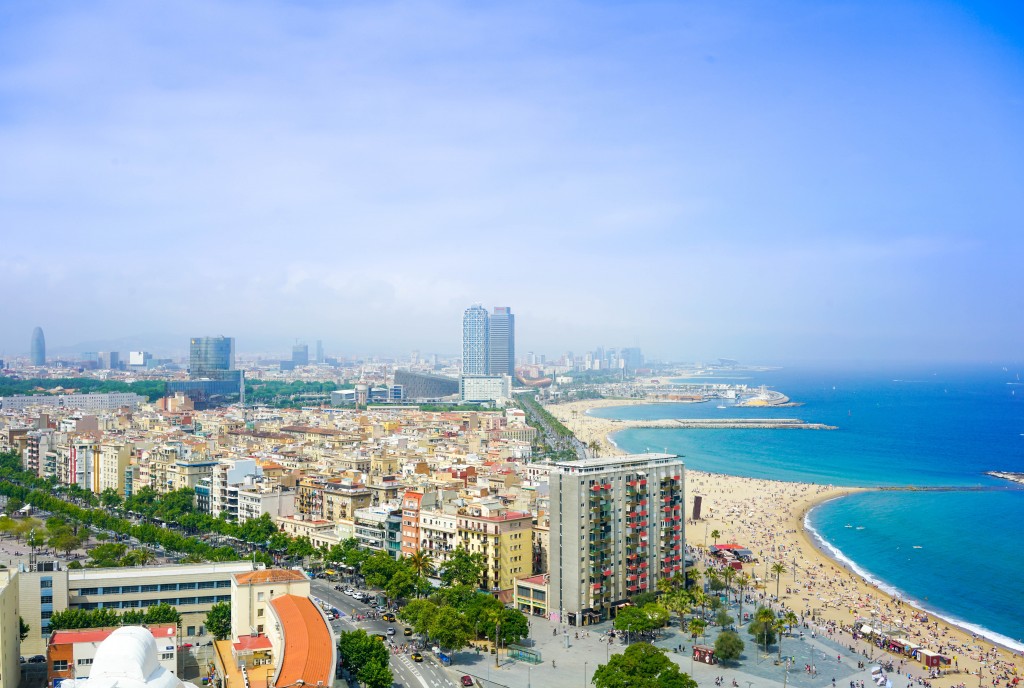 Photo by Enes / The Unsplash License

Similar to Sónar, DGTL blends music, technology, and art to create an unforgettable experience for festivalgoers. To keep the lineup fresh, DGTL combines big-names with emerging artists. Although this year’s lineup has yet to be announced, in the past the lineup has included Adriatique, Black Coffee, Honey Dijon, Solomun, Tale of Us, Marcel Dettmann, Jennifer Cardini, Dixon, and Maceo Plex. DGTL is held at the Parc del Fòrum site, which also is home to Primavera Sound. The festival will be held on August 23rd and 24th of this year.

Last but not least, from June 14th to 16th, there’s the Off Week Festival in Barcelona. Previously this was during the same week as Sonar, but since this year Sonar has moved to July to disconnect from Off Week after several complaints about to coinciding events. Off Week will also take place at the Parc del Fòrum (which is right along the water). The lineup includes Diynamic Outdoor, Afterlife, [a:rpia:r], Paradise by Jamie Jones, Ellum & Lone Romantic, FRRC & Fabric, and Fuse London. It should be noted that the official lineup and schedule is subject to change, but you can purchase full event and day tickets on their website.