Since the Paris attacks two weeks ago, ISIS has gained a fierce new adversary in the form of hacker group Anonymous, which has sworn to do everything in its power to block the terrorist organisation at any future attacks and damage them where- and however they can.

A subsidiary of of Anonymous caused quite a stir last Sunday when it released a supposed list of events and locations where ISIS allegedly planned to attack on the 22nd. Most notable of which was Concrete’s Drumcode label party, where Joel Mull, X1000, Marcelus, and label head Adam Beyer were to perform. The information released, however, was nothing more than a hoax to strengthen the vigilance of intelligence services and authorities.

After releasing the info and gaining publicity from some major media outlets, the so-called Anonymous subsidiary took down their original post that warned against the attacks and replaced it with a “Mission Accomplished” message, ultimately leaving the media that were rash in spreading the misinformation, without any fact-checking or source verification, looking pretty foolish. 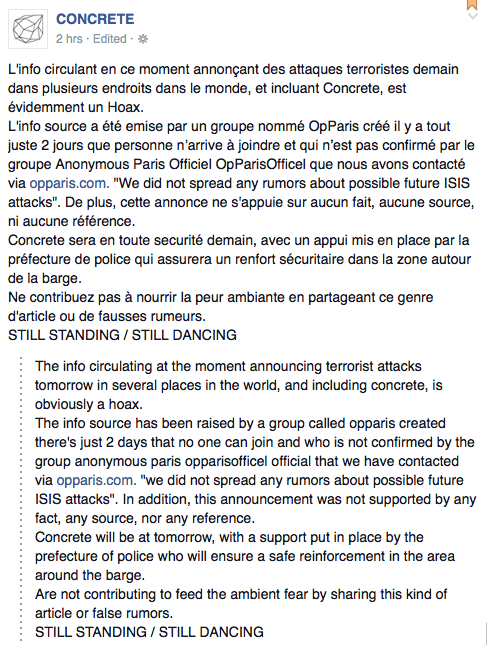