Though Ross Ulbricht, the alleged founder of Dark Web marketplace The Silk Road, has been sentenced to life in prison, the booming business that is the online drug marketplace has shown no signs of slowing down.

In the recent Global Drug Survey 2015, British addiction psychiatrist Dr. Adam Winstock questioned 102K+ people over 50 countries about their habits specific to drug purchasing. Though a small number (roughly 5K) had actually used the TOR accessible The Silk Road, the survey nevertheless represents the largest study of Dark Web users to date. “How does access to really good drugs—away from street criminals—change people’s drug behaviours?” Winstock asked himself. “That’s one of the things we’re trying to find out. Shopping on Amazon completely changed my life—being able to buy all these things for such little money. I wonder how these online markets will change drug consumption.” 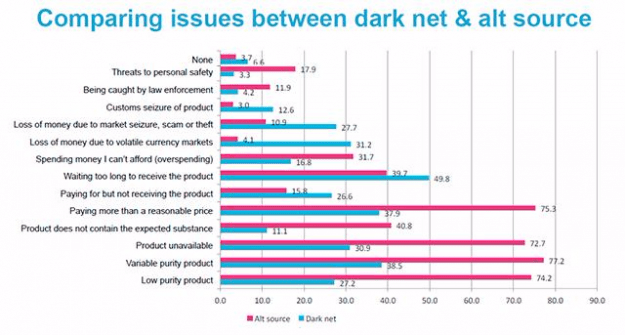 A quick comparison of Dark Web drug purchases vs. those from street dealers yields some rather interesting (if not, startling) results. Based on the survey, 40% of Dark Web shoppers said street purchases turned out to be different substances than claimed. In contrast, only 10% of those who bought online had a similar complaint. In general, users reported online illegal drug prices to be lower, the quality to be higher, and the experience to be much safer, also claiming fewer impulse purchases.

According to the survey, the most widely purchased drug online is MDMA with 64% of online shoppers admitting to purchasing it as a pill or powder. Coming in second is LSD, whose high ranking can be attributed to a combination of high name awareness and difficult access. 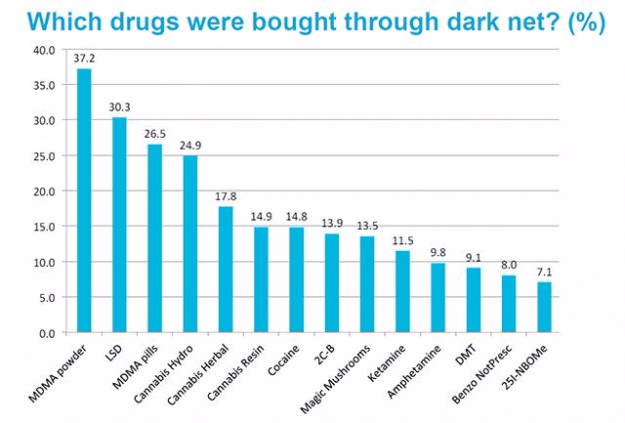