The people from III Points stroke very hard during Art Basel this year by delivering nine high quality shows in partnership with Plot, Miami Link and Resident Advisor. The U.K. based website was hosting its first ever showcase in Miami. Most events were being held in a new venue called Magic City Studios in Little Haiti, 10 min away from the Art District of Miami. The spectacular line up included the likes of Solomun, Tale of Us, Damian Lazarus, Maceo Plex and Acid Pauli for the closing event on Sunday. We attended the latter at Bardot, since they changed of location the day of the event. Bardot is an iconic venue for all true Deep House fans in Miami and we had quite an interesting experience.

Martin Gretschmann aka Acid Pauli started as a guitarist in a punk & indie band in the late 80’s. His first song “Console” was released in the 90’s using an Atari and a four track tape machine, one year later he released his first album “Pan or Ama”. As a producer, the Berliner has worked with massive talents such as Adana Twins, Nu, Simming, Daniel Bortz, signing on imprints like Get Physical, Dyinamic and Exploited. In 2015 Pauli being such a multi talented artist, still performed live shows with a band named The Notwist, one of many bands he’s been involved with. Today Acid Pauli Sundays have become an institution, featuring Djs, live bands and performing art incorporated at Heart club in Ibiza. To understand where Acid Sundays come from it’s important to know Heart club was put together by the Adria Brothers & Cirque du Soleil. Acid Pauli’s sets have touched countless souls around the world and even more of them at Robot Heart in Burning Man. As we show up for the show we realize the German native has kept his good habits since everyone can enjoy a painter doing a nice mural simply next to the entrance door of the venue. As Bardot gets busier we see more and more large rounded hats and a few men clearly dressed in Burning Man like costumes which totally fits the vibe with the music. The line up by order of appearance features Guy Laliberte, Sainte Vie, Acid Pauli, Oceans Orientals and Lum.

La Liberte uses Live Ableton for his set and throws a very special tune “La LLorona” by Chavela Vargas, sort of acoustic guitar ballad with spoken words in Spanish, we are very very far from the usual electronic music genre. As Acid Pauli makes his entrance, we hear “Pauli is here, it’s on!” The man shows up with his tribe and starts setting up a moment after. Pauli uses a TR8 Roland, a Xone Controller and Live Ableton. As always, his set is very eclectic featuring electronic music and acoustic songs as well. The fans quickly embrace Pauli’s emotional journey with unconditional passion and love. Later in the night, Oceanvs Orientalis of Istabul takes on with two artists playing live percussions, all the devoted fans get very much into it and more psychedelic dancers appear out of the blue. At last Lum delivers a sharp impressive set along side live percussions as well. Her music provides a particular sense of well being, as she puts it: “Become your own medicine”. 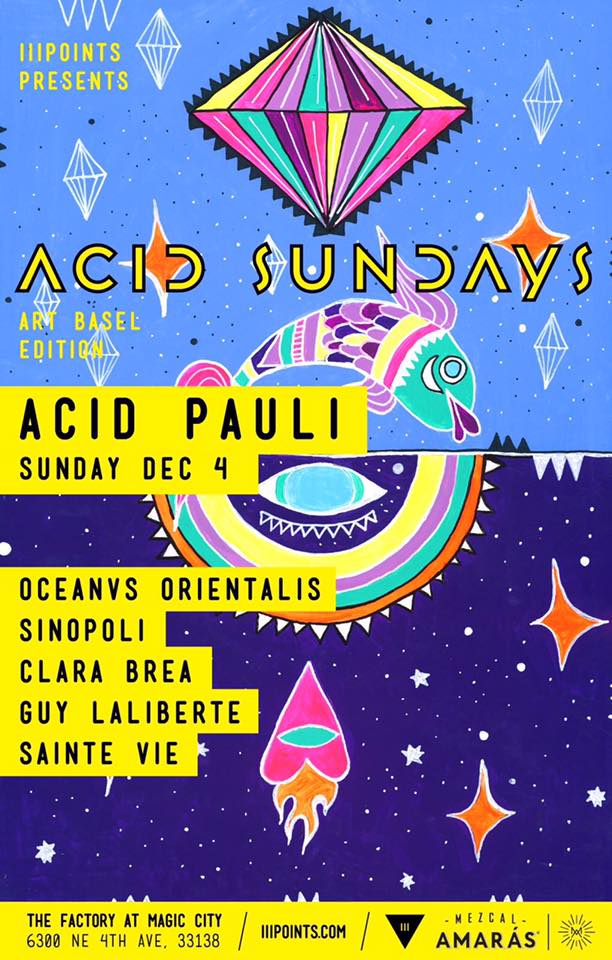