It’s 11:30 in the morning on a Saturday as we quickly finish our coffee and hop on the bike to set out for one of the best festivals this season. We set a course due North, away from the sprawling capital of modern dance music, into its hinterlands.

As houses become fewer and further in between, the landscape becomes greener as we paddle our way over an ever-increasing number of dikes and bridges; a sign indicating we’ve now officially left Amsterdam is overshadowed by a much smaller, bright red & yellow sign below it, pointing us where we need to go. 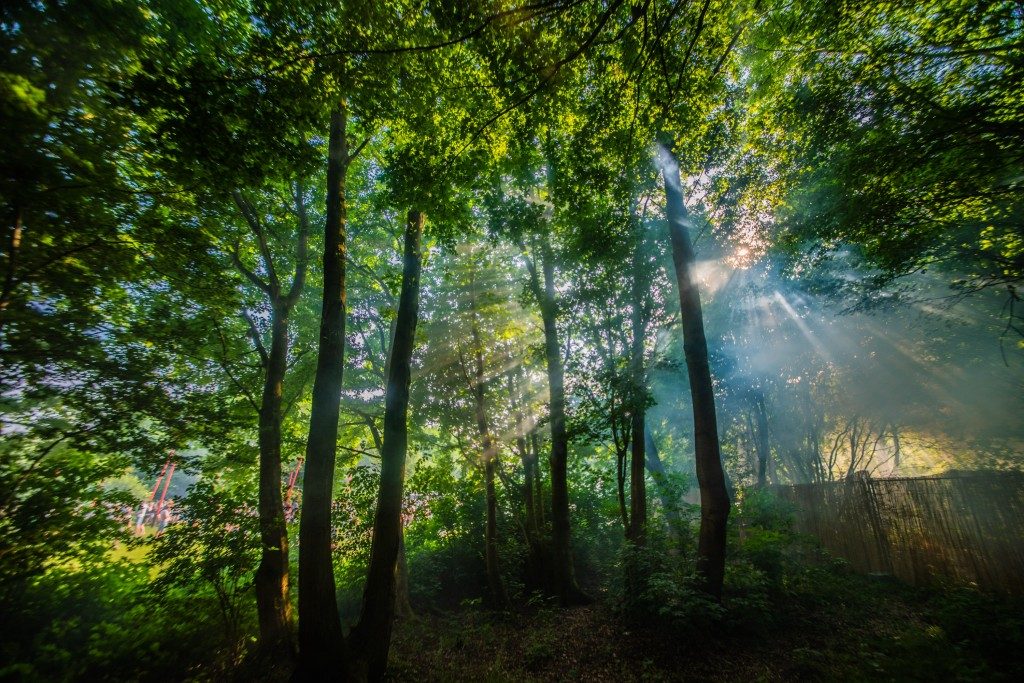 As we enter ‘t Twiske nature reserve, we can’t help but feel disconnected from city life, an atmosphere that will only enhance our experience at Lente Kabinet. The seventh edition of Dekmantel’s little sister celebrates its first full-fledged weekender.

Known for a larger emphasis on arts and avant-garde music; last years focus on bands and live acts expands even further this year, bringing in more experimental artists like Nosedrip and jazz-funk hero Kamaal Williams.

The ‘Tweede Kamer’ stage, as well as the general entrance, have been moved from last years location to open up the festival grounds a lot more. This provides a more comfortable experience moving from stage to stage, to the benefit of both artists and ravers alike. This might seem trivial on the surface, but moving around a festival can be a make or break detail in seeing your favourite artists, or even more importantly, the new up and coming artists you didn’t know yet. Surprisingly, although the area has been vastly increased, the amount of stages is the same and the festival still never feels empty.

The skies are solid blue with the sun blistering out an intense 28º, as Kléo opens Lente Kabinet’s Tweede Kamer. The stage might be under a tent, but her grooves make it feel just as warm under its cover as outside of it. It’s this meticulous selection of the right artist at the right time that draws ravers in early, as we move on to the Eerste Kamer, sometimes also dubbed the festivals main stage.

At the Eerste Kamer, we find that the sun isn’t the only thing shining bright today. Utrecht based Carista opens the festival on day 1, and her smile says more than a 1000 words. It radiates a warmth that reflects in her track selection throughout the first 3 hours of the festival and will set the tone for the rest of day 1. 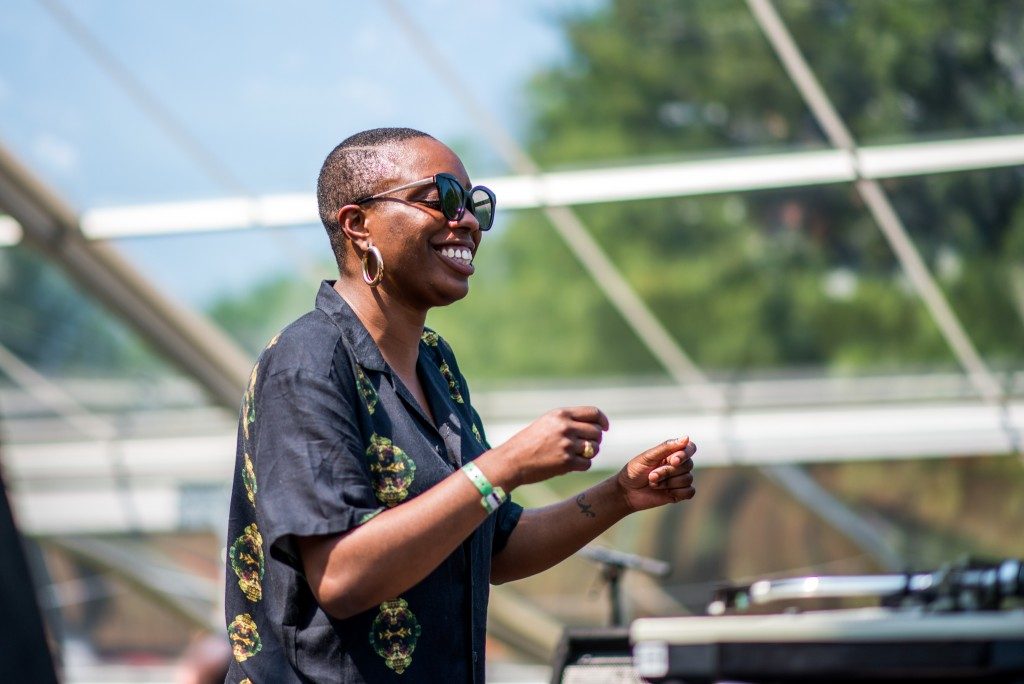 As we stick around until the end of her set, we’re completely caught off guard by Lente Kabinet’s debut of Dazion. A sweeping live set with Dazion’s hair flailing about as he breaks open the main stage, building on the energy set by Carista.

We rush over to the Derde Kamer as we have stuffed our schedule too full, with too much music to hear. At the stage, we catch Palmbomen II & Betonkust performing their freshly released Centerparcs LP live. If you haven’t heard it already, the story and sound behind their collaboration are quite unique, we suggest you give it a spin at your favourite record shop.

Red Light Radio is situated in the same place as last year. Where David Vunk made his breakout performance in 2017, we now find Moscow stalwart Lipelis at the controls. We’re quite excited about the next name on the line-up. Alexander Robotnick.

Active in electronic music since 1980, its safe to say he’s the artist with the longest track record playing at the festival. The age gap all but evaporated when he takes to the stage, performs his own work live, all the while singing through a vocoder microphone to the great pleasure of the crowds. 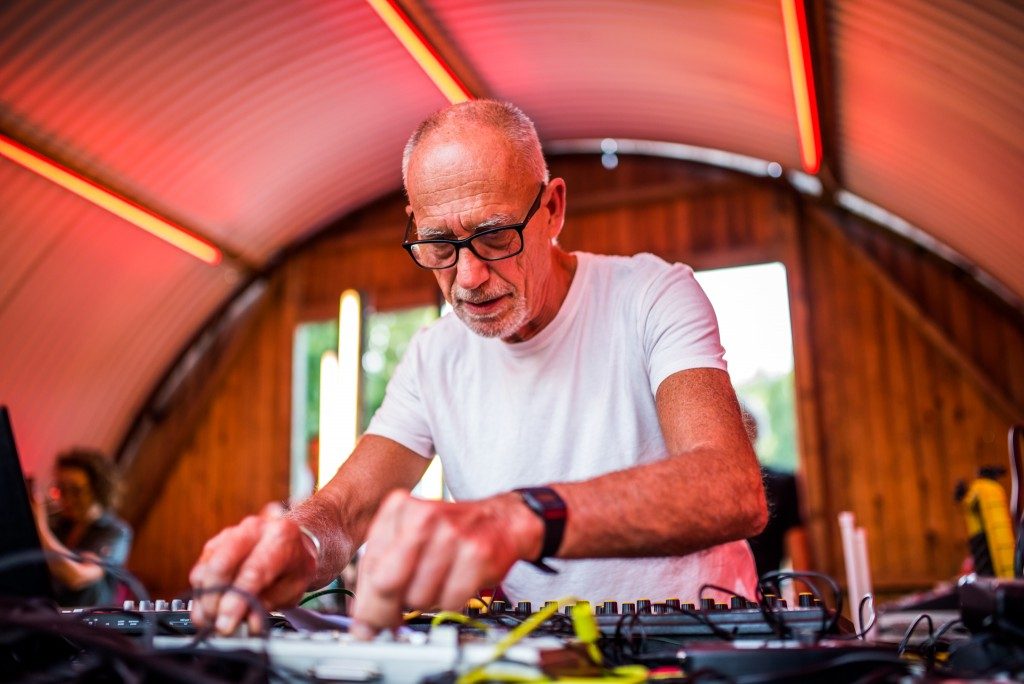 We leave just in time to catch the last hour of Italian master of melody Marco Passarani back at the Tweede Kamer. Flanked by a slowly setting sun, we close our eyes as our feet dance to his Wonky Wonky Wonky signature track. We feel like we could dance forever, and we’re already contemplating where to go on day 2. We promise ourselves to visit more of the art installations dotting the festival terrain, but before we can, there’s one more stop for day 1.

Enter Ben UFO. The British selector behind Hessle Audio breaks down the Eerste Kamer with meticulous precision. A man of many faces, he is as versatile as much as a musical chameleon. It feels more like 5 minutes than 3 hours before its over, and we’re feeling like a little kid before its birthday. We can’t wait to go to bed and start the next day. 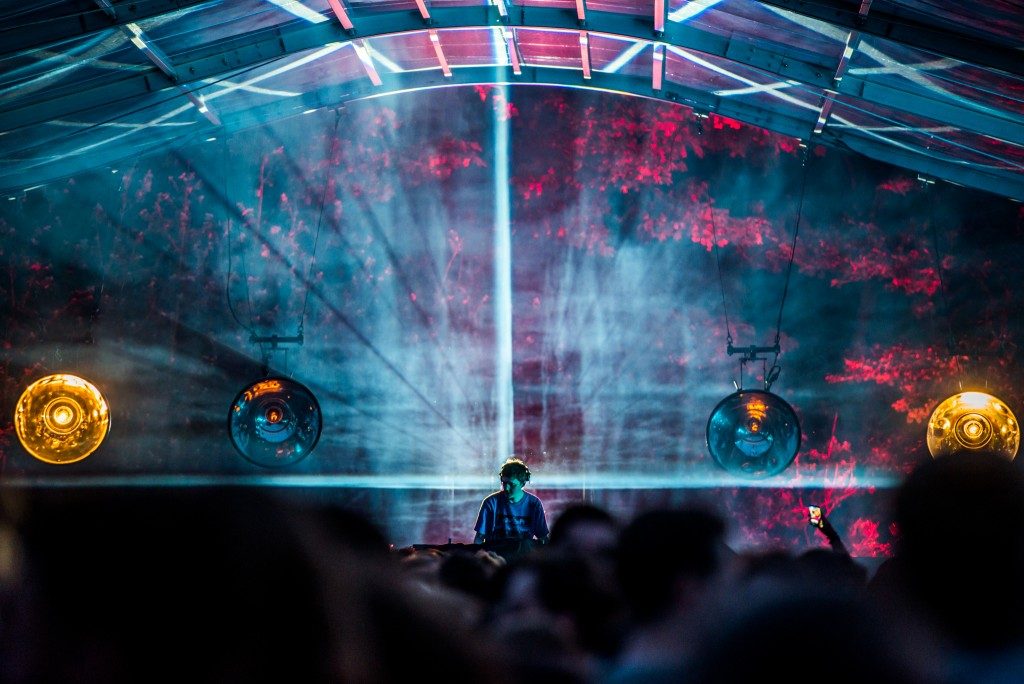 As most people are still enjoying their Sunday morning brunch, we’re already refreshed and on our way to ’t Twiske for day 2 of Lente Kabinet.

We’re keen to catch Bufiman on the decks, being introduced to the Dekmantel family last year with the release of his Peace Moves EP. The EP is on sale at the festivals Merchandise stand, amongst others.

As we browse through the selection, we find more of Dekmantel’s 10 Year Anniversary EP’s, their Selector series and newly fashioned Red Light Radio shirts as well. We finally leave the stand with one of the last new copies of Bruxas – Más Profundo and a t-shirt sporting Lente Kabinets artwork, both designed by Stefan Glerum in his signature style that has been linked to Lente Kabinet since the start.

We set off to the Red Light Radio stage, but before we get there, we stop at a quite interesting art installation. Steven de Peven calls it: Aquarally. A pun on the Dutch word for watercolour paint, aquarel, he makes paintings on the spot.

With a rally bike.

He does this by holding a tray of paint under the spinning wheel being revved by the driver, shooting paint on a canvas the size of an Instagram post. 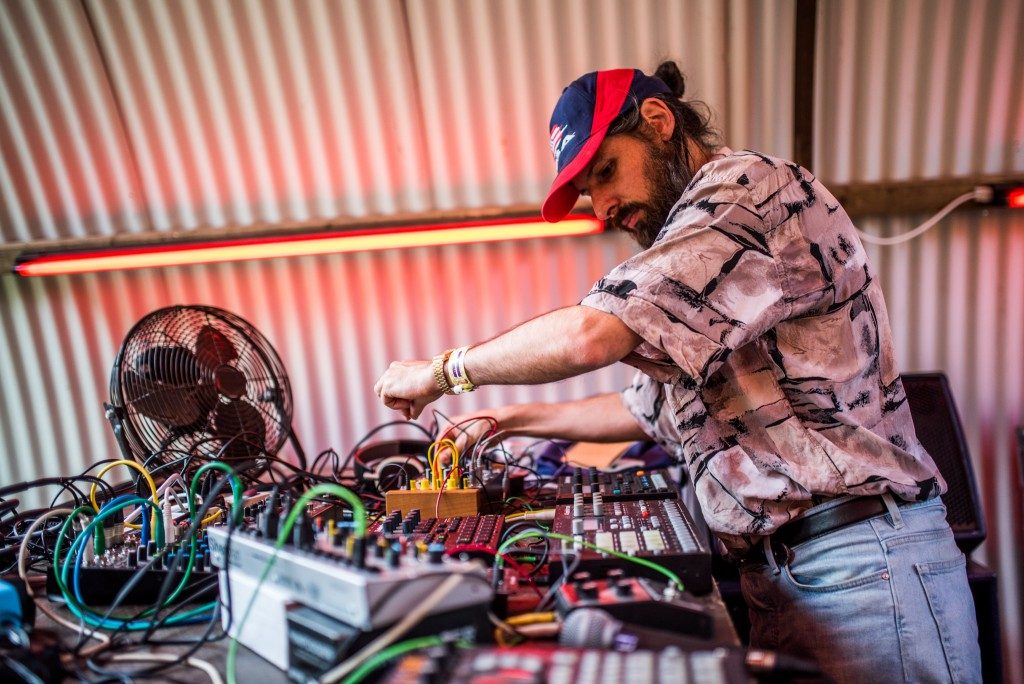 Still not entirely sure how someone can come up with something so epic, we wander on to Red Light Radio where we get introduced to Black Zone Myth Chant. True to analog musicianship, Black Zone Myth Chant performs completely live with no laptop or other computer involved whatsoever.

It’s these kinds of discoveries that set Lente Kabinet apart from a slew of other events. You might not know the artist yet, but it all fits in the musical palette presented over the weekend, and you’re bound to discover something new and exciting that speaks to you on a deeper level.

When initially penning down our schedule for the next day, we had no idea it would be (quite happily) interrupted when we ended up at the Eerste Kamer just as Rahaan & GE-OLOGY made their mark on the main stage. With smiles speaking of pure joy, they put on disco classic, after classic, after classic. The crowd seemed almost hypnotised, as each record seemed to hit the exact sweet spot. Unknown to them, Lente Kabinet had another ace up their sleeve. 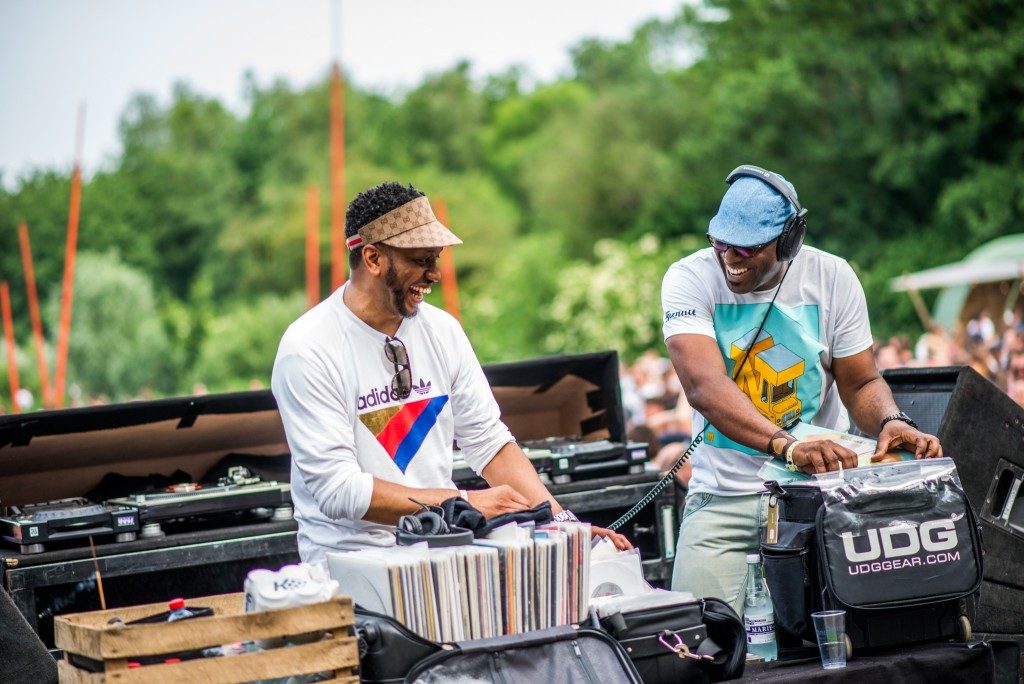 When you see Mim Suleiman take to the stage you might not be sure what’s going to happen next. She’s not very tall and might lack the imposing figure some artists have on stage.

But then, she fires away. Bursting into dance with every inch of her body, while singing her lungs out over the top of Esa’s music, she commands the stage. Left to right, back to centre and around the DJ booth. In most cases the singer is the add-on to the music, to make it more appealing to a larger crowd.

In the case of Mim Suleiman, she IS the music. A relentless energy not often seen, she is more imposing than many artists, and will without a doubt put a smile on your face, as she did on ours.

Still catching our breath from dancing, we make 2 stops to catch Dekmantel founders Thomas Martojo and Casper Tielrooij playing back2back with Intergalactic Gary and Cinnaman respectively. With every record, you can hear what lit the fire that is Dekmantel and also became Lente Kabinet.

We make our way back to de Eerste Kamer as Hunee is already in full swing. He is one of those artists where everyone asks “How does he do it? And how does he do it every single time again, and again!”. Pure musical bliss.

It’s been extremely warm for the past week, and with the Netherlands’ humid climate, this usually means rain. And although the clouds did eventually break as it rained down on the festival, the crowd could only hear Hunee’s rain of disco fire. 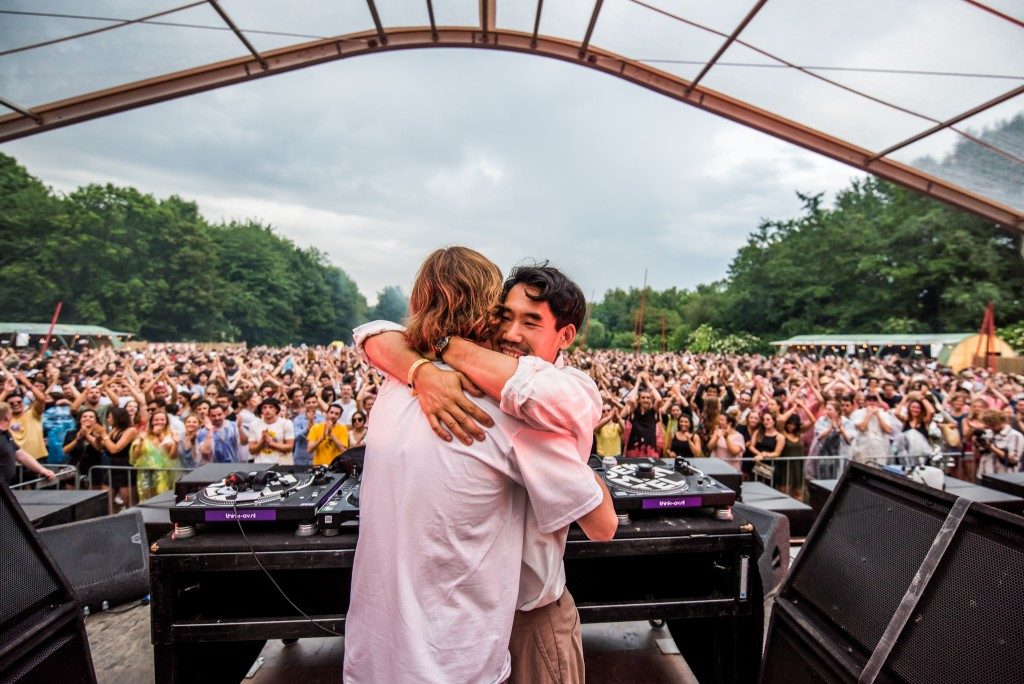 We’re left in a sort of trance as Motor City Drum Ensemble takes the stage to close off the main stage for Lentekabinets first weekender. We make a bold choice. We leave the mainstage behind and head off to close at the Tweede Kamer.

We find Peggy Gou ready to give ravers one last epic set before the festival is over.

With the more recent, sometimes heated, debate on gender equality in the music scene, Peggy Gou (amongst many others) has been the target of dissidents who claim her stellar rise has been exactly due to this debate and not on the merit of her skill as an artist and musician.

This is the third time we’ve seen her play, and we can safely say that Dekmantel’s quality of choice in artists also applies to Peggy Gou. She is very much an artist in the core sense of the meaning. Her own style sets her apart as she closes down Lente Kabinet’s Tweede Kamerstage with a flair and taste we can only assume will inspire more to follow in her footsteps, or even better, create their own paths.

Exhausted but extremely satisfied, we get on our bikes and get ready to call it a night. As the lush, green surroundings of ’t Twiske slowly turn back into Amsterdam’s stone canals, we can’t help but grin because of all the fun, madness and simply outright amazing music over the past weekend.

We can only conclude that, although Dekmantel’s touch is very much present in maturing Lente Kabinet in stride with the main festival by opting for a weekender, it will forever remain its naughty, rebellious little sister. 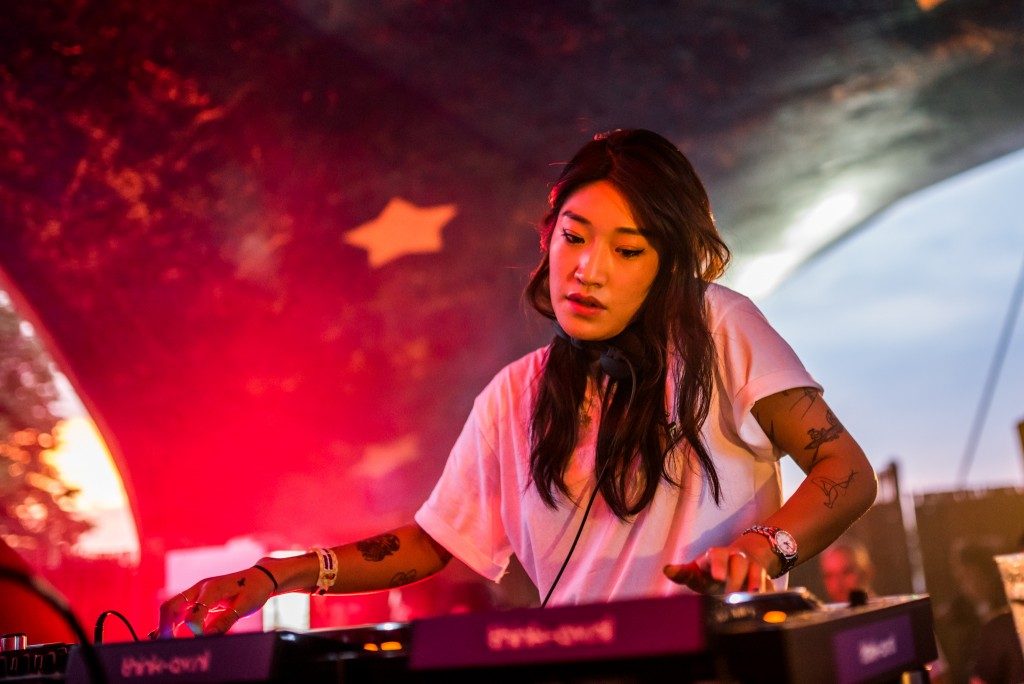