Doing 3 days at Ultra when you’re 38 years old is like running the New York Marathon for the first time with no shoes on. “You sound like you were ran over by a train” my friend tells me on Monday as we’re talking on the phone…”Yes but it was worth it” I respond.

Who would have thought I would finally break the curse and see Adam Beyer perform, he’s been literally a hero of mine since I bought his records back in the 90’s and for some reason, I could never manage to see him play. Though, I wish our first encounter in person hadn’t been in such an awkward place, more details on that later… Of course many other legendary DJs were on the line up…like the Italian Maestro, Marco Carola. We started our first day “crescendo” and chose to head down to the Arcadia Stage, Technasia is playing and Maya Jane Coles is next… and again I am so happy as it was the first time I see her play. After just a few minutes, I can tell why she is in high demand all around the world, her first track is unique and gives a feeling of well being so contagious, everyone has the smile on his face. We stay there for most of her set, and then the rain makes us seek shelter else where, we realize Marco Carola is playing on the Carl Cox Mega Structure. We head down to the other end of the Ultra, hearing EDM here and there on various stages and finally arrive where we want…to hear some heavy weight techno and trust me this stage name really fits the reality. You don’t see gigantic moving screens going up and down from the ceiling very often, it is definitely “mega” impressive. Carola is delivering his powerful techno with great skills, next is “The King” Carl Cox who speeds up the tempo drastically, we love it but it’s time to check another stage. Rabbit in the Moon is closing the “live stage”, I had seen them many years ago but this performance is one for the books! The lead singer, “Bunny” wears so many hats, he dances, performs and above all comes up with totally crazy stuff, wearing a different costume for each song. At some point he shows up in the inside a balloon and throws himself in the crowd, probably the crazier thing is when he invites a random woman on stage and make her go on her knees while he’s doing a fire show on the helmet he gave her, using some kind of fire chainsaw! If you haven’t experienced a show with Rabbit in The Moon, you haven’t lived. 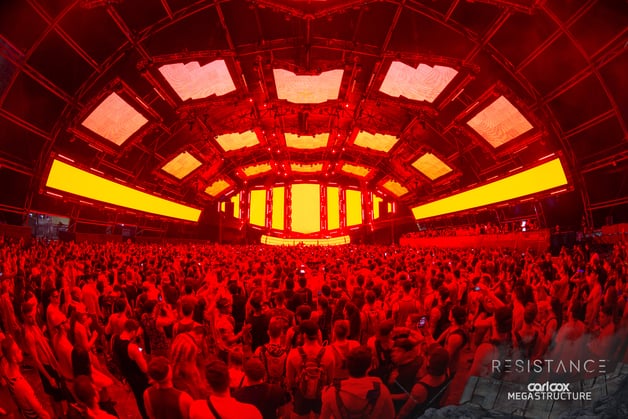 We’re back at Ultra for round 2 Saturday, we arrive just on time for Black Coffee and he is playing on the Carl Cox Mega Structure, it is still early and people are still filling up the giant tent. As always his vibe is a mixture of afro, soulful and everything in between…the South African keeps impressing us with his turntablist skills, throwing fx, acapellas and god knows what else, he is one of those true artists, if you see him once, you won’t forget him for the rest of your life. Tale of Us is next which should have been the opposite in our humble opinion but we stick around for their fine melodic sound and see some of John Digweed and Sasha’s set. Their show is on point but we need to go check that giant spider again at Arcadia, Swedish pioneer Adam Beyer is about to play and we sure don’t want to miss that. Somehow I sneak in backstage to use the closest bathroom and guess who I run to face to face…”This is the great Adam Beyer I am meeting in the bathroom!” I say. “Yes, it happens Lol” he responds. There were so many things I wanted to tell him, the fact I own the Drumcode 001 pressed in the mid 90’s, I also wanted to tell him he’s always been a real inspiration, etc… but I get star stuck and of course he has to take off, he’s just about to land on the immense spider with +5000 devoted fans waiting. With no surprise, his set is on point, great technique, great tunes. We’re enjoying the moment, the rain has finally stopped, the giant spider paired up with Adam Beyer is a magical combination and there is no other place we wish to be at. Time seems to stop; Beyer’s Drumcode beats are so close to what it was in the 90’s, it’s incredible, with perhaps a cleaner and brighter mastering on the tunes… The Biscayne Bay breeze is blowing, not too strong just the perfect amount and then we realize it’s almost over. We decide to hurry up and leave so we can beat the traffic and see Adam Beyer play at Trade with Joel Mull…Saturday is definitely Adam Beyer day!

Back Sunday we arrive right on time to see our friend Ella Romand on the Biscayne stage, her soulful beats put us in the mood, such a great way to start the day. Some time later, we catch Stephan Bodzin’s set, another amazing artist which was on the top of our list…his live is very acid, so good. The German native is exciting to see because not only his music is good but you can tell by his gestures and his face that he is living, feeling and sharing the music 200%. His set is made of many breaks where he loves to play with the filters on acid sounds, that’s Stephan Bodzin right there for you and we love it. Once Stephen is done we head down to the Live Stage, it’s our 3rd day, our legs are feeling it and that stage has the luxury to offer some magnificent seats… We enjoy that band from Australia, Bag Raiders, their vibe is perfect for a Sunday, you can almost compare their sound to Flight Facilities, but just a little smoother. Following the Australian duo, Californian hero Barclay Crenshaw takes over, he’s also known as Claude Von Stroke. The Dirtybird boss performs a cool set, again quite chill, sometimes housy sometimes more down tempo, he also takes on the mike at times, well done. Once he is finished we head down to the Arcadia stage to see the daily “Landing show” which we missed the two previous days. The flames, the dancers, the lights, the spider talking to us, that’s a whole different level, those guys pull off a memorable performance. Once the “Landing Show” is over my legs start to feel heavier than ever before, it is the 3rd day, it’s only 8:30PM and unfortunately I’m struggling to keep my eyes open. It’s time to head back home, after attending 9 Ultras, the music & the trends do change, the main stage is surely more commercial than 9 years ago, but the new talents, the pioneers, the live acts are still truly a wonderful experience. See you for more adventures next year as Ultra will be celebrating its 20th anniversary. 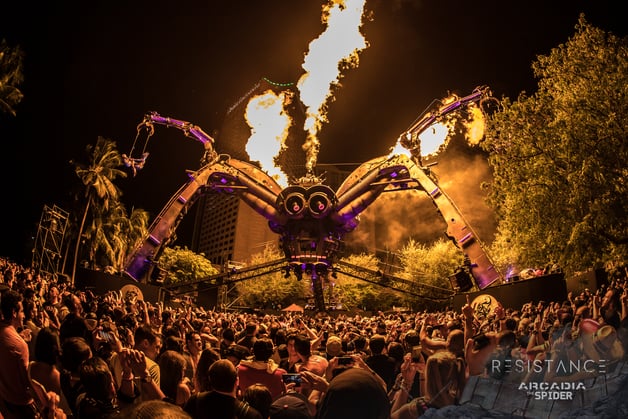