Late June, Pioneer DJ launched the DDJ-400. DHA got the opportunity to test drive it extensively. The DDJ-400 is the Rekordbox powered successor to the DDJ-RB. Thoroughly changing up not only what’s on the outside, but what’s on the inside as well, for a surprisingly compact all-in-one solution.

One thing that immediately stood out to us, is that the new DDJ-400 layout is inspired by that of a ‘standard’ set of CDJ’s and a DJM. Functions like the tempo slider and the Auto-Loop are now in the same place as they would be on a NXS2 club set.

Even subtle changes on the mixer section like moving the master volume to the top right make it feel a lot more familiar to its ‘big brothers’.

The advantage of this is that the transition to a club system is easier for those who start out learning to DJ at home with the DDJ-400. But even more so the other way around; seasoned DJ’s now have a very affordable option to play and test out tracks at home for a mere €279,- as opposed to forking out almost 10x that amount for a DJM-950NXS2 alone.

The platters, although smaller than a club set, feel sturdy and just as responsive, eliminating the need to use the Sync button which is so often at times the case on DJ controllers in this range. 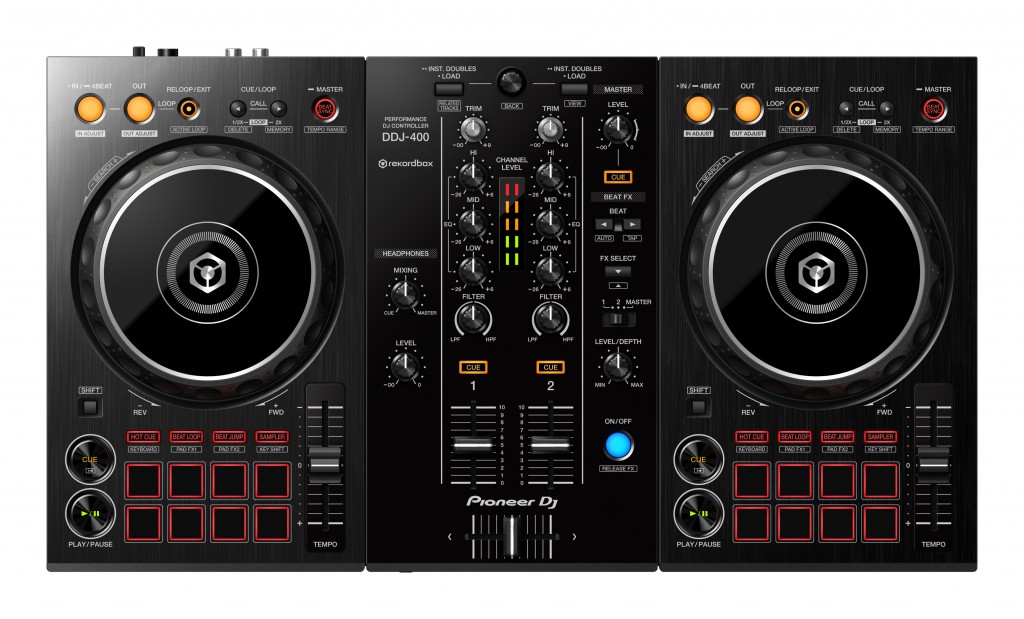 The DDJ-400 is USB bus powered and comes with a USB cable and a license for Pioneer DJ’s Rekordbox software (more on this later). It has a 24-bit soundcard and an RCA master output. The output has a surprisingly low noise floor for a bus-powered device, and although it doesn’t replace a dedicated outboard soundcard this makes it more than adequate to double as a soundcard for high-quality audio playback of other files and sounds on your computer.

Furthermore, the DDJ-400 comes with a 1/4″ jack mic input (no phantom power), onboard filter & Beat FX and of course a headphone input. All this is housed in a sturdy built case; partly plastic, partly aluminium.

Below the DDJ-400’s platters is the Performance Control section, similar to its predecessor. Each deck has 8 dedicated pads, which can be used for a variety of purposes. The more obvious are Hot Cues and Sampling.

However, with use of the Shift function, an array of direct FX and even a musical keyboard can be accessed. During play, using Shift to access certain functions on either the pads or the rest of the DDJ-400 can feel quite fidgety. However, once accessed, FX like combined Echo / Tape-stops make it easy to perform creatively. We felt we used the effect pads more than the actual Beat FX strip located on the main mixer section of the DDJ-400.

The DDJ-400 comes with a full Rekordbox license. Although the software is free to download for exporting to USB; if you want to use it in Performance mode you need a separate license. Pioneer DJ made a smart move by including it with all of their dedicated controllers, making the choice for Pioneer DJ equipment more attractive than its counterparts.

Besides being able to access your Track Collection, Rekordbox offers smart ways of editing the Beat FX and selecting which FX, Hot Cues and Samples are playable through the Performance Control section.

Some of its functions might feel slightly fidgety because of ‘menu-diving’, but it hardly feels justifiable to complain about that, seeing the DDJ-400 very reasonable price tag and comes with a full Rekordbox license.

The DDJ-400 is the perfect entry level controller for any music enthusiast, wannabe DJ or a seasoned pro looking to play at home. It offers enough parallels with Pioneer DJ’s club systems for an easy transition.