For the occasion, she has invited the likes of Boo Williams, The Analogue Cops, and Milton Bradley on board for its 35 release, continuing to shape its identity by continuously releasing its distinct blend of techno and house music. The label defines its love for raw & analogue sounds by working closely with friends and artists who share the same musical state of mind.

With that Bloody Mary has, not only, presented her 10 absolute favorite tracks off Dame-Music here, but also goes In Conversation with Milton Bradley to discuss all things Dame-Music and…well, music in general! 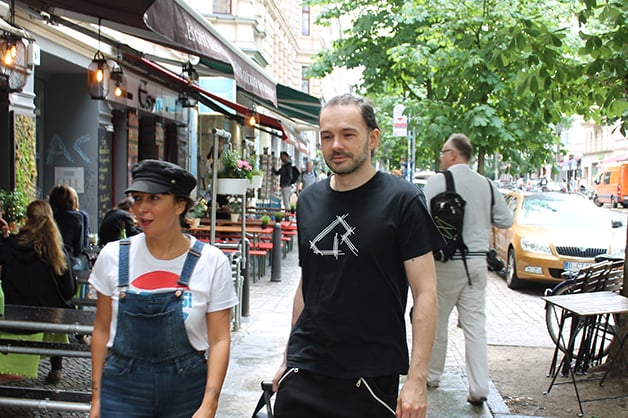 Milton Bradley: Hey Mary, congratulations on the 7 year anniversary of your label Dame-Music. Could you tell me a bit more about how the label started?
Bloody Mary: The idea was already in my head in 2009, and after releasing on other labels previously, the first release came out on Dame-Music in June 2010. Since the beginning of my career I was always attracted to doing my own thing, and from the very first release I wanted to make sure the music was released on vinyl. It was a big challenge at the time, because in 2010 vinyl sales were really struggling and digital was king, but I always believed that if I continued to play and release vinyl, this would be the best way to promote the format I love, and to share this passion with the people who come to hear me play on the weekend.

As a close friend of mine who has one of the biggest vinyl collections I know, it’s no secret that you’re a huge vinyl junkie. Since when have you been collecting vinyl, and when did your obsession start?

MB: I’ve always liked records. As a little kid I wanted to have a record player and an old gramophone and a phonograph so badly, but I couldn’t afford one. I just had some tape recorders. I loved that you can see and feel the music in grooves. Means it “touches” 3 senses, it also gives you a visual and haptic experience.

When I discovered acid house and techno in the late 80ies, it really got me. After the Berlin wall came down in 1989, I went to record stores because I wanted to have the tracks I knew from some mixtapes. That was actually the beginning of building up my record collection. Speaking of records, if you’re so passionate about wax, then why isn’t Dame-Music a vinyl only label?
BM: As I’ve been travelling the world since 2005, there are many countries where it’s difficult for people to buy vinyl, because my label is produced in Europe which makes the cost a bit more expensive if you purchase it over the other side of the world. I didn’t want my music to be inaccessible to people who couldn’t afford it. This is something I realised when I started travelling.

You’re also travelling often to play, what’s your favourite country you’ve played in so far, and why?

MB: I wouldn’t say I have a favourite country to play. I’ve already had great parties all over the world. Of course, playing in my hometown is always fun, besides that I remember having some fantastic nights mostly in France and Italy because I’ve played there many times.

I saw that you’ve had artists from many different continents on your label over the past 7 years. How do you choose which artists to release on the label?
BM: For the first 2 years when I started the label, I was releasing the music of all my close friends. As Dame-Music slowly started to become more established, I was able to sign artists whose music I played and supported, and some talented artists I met on the road during my travels. Each of the 7 years of the label has been different, and I’m constantly learning the positive (and sometimes negative) things from each release. I’m happy that, to this day, I’ve been able to work with established artists like Boo Williams, Marcel Fengler, Axel Boman amongst others. This is also why I wanted to invite you to Dame-Music for this 7 year anniversary release, as we’re both acid lovers and I knew it would be fun to collaborate in the studio, which it was.

One thing I’ve always wanted to ask you though – what is the difference between your Milton Bradley project, and Alien Rain?

MB: I wouldn’t call my Milton Bradley alias “a project”, its me, representing my own interpretation of electronic music. Alien Rain just stands for Acid music how I like it. In 2010 I was in the mood for some 303 action so I made lots of tracks just for fun. This sound did not fit to my former productions so I decided to release it on a new label. An interesting fact I probably never really told is that Alien Rain was actually just the name of the label. On the first record there was only the Alien Rain logo and no further info, so I guess in the beginning it was not really clear and people thought it was the name of the artist. Kinda funny so I kept it also as an alias.

And you, you also produce and perform live as The Jaydes. Do you have any upcoming music planned for this project?
BM: I started the project with my mate Attan back in 2013 because we have the same love of gear and we’ve always had fun jamming together in the studio. The Jaydes is first of all a concept inspired by two friends having fun jamming together on stage or in the lab; this is the base of the project. Attan decided to move back to France 18 months ago so it’s difficult to create these jam sessions when we’re living so far apart. Our live set is all hardware based, and we need to be in constant contact to work on it, so sadly with this distance between us it’s not possible to work on it anymore. A complete analogue live set is a lot of work, and sadly we can’t jam together over skype…

You also play live – do you prefer this to DJing? What differences stand out the most for you between playing live and performing as a DJ?
MB: I rarely play live, I prefer DJing. I actually always wanted to be a DJ. The reason why I started DJing is because I had some records at home, which I wanted to hear in a club. So I thought to myself, “Why don’t you just play it yourself?” As a DJ I can be way more flexible and versatile with music. Playing live is way more difficult, I can only play my own stuff (which I’ve often heard too many times), beside that it is difficult to recreate some of my tracks in a live situation. There are often lots of filter moves in tracks which I can’t really recreate in a live situation.

Anyway, let’s get back to the label. 7 years is quite an achievement! How are you going to celebrate the anniversary?
BM: For the anniversary, I decided to take a track from Boo Williams, The Analogue Cops and of course our collaboration. I love testing unreleased tracks from my artists before releasing, and there was no doubt that for the 7 year anniversary I would chose these 3 tracks. I’ve played them all in many festivals over the last few months, and I knew these three tracks would fit well together on the same vinyl. Apart from this release, I’m excited that you and I are both going to spin vinyl together at the Mixmag Lab in London on 21st July. Before that, I’ll also be celebrating with a South American tour in early July, stopping in Ecuador, Peru and Colombia.

How about you, what are you working on at the moment, and do you have any projects planned for the upcoming months?
MB: I always have lots of ideas and I am always working on different stuff, which I then maybe release in a few months or years. I recently released a new, still anonymous side project which I’d already had in my mind for years. Some tracks will be out on other labels by the end of the year. Beside that I want to release another Alien Rain record soon and maybe a new Milton Bradley record or a further side project. We will see 🙂

So where to from here Mary? What can we expect from you and Dame-Music in the future?
BM: My forthcoming EP will come out on Josh Wink’s label Ovum in September. I’m quite excited about this project as Josh inspired me as a producer so it’s a pleasure to be part of the Ovum family. Regarding Dame-Music, I just signed one of my favourite producers ever to the label, who I’ve been following for so many years. He’s one of the most iconic acid producers for me – I have so many of his records and they often feature in my DJ sets. That’s about all I can say at the moment, but you can expect the release to come out later this year. More news soon…