A Look Inside La Rêve

Over the past 4 years, Amsterdam’s La Rêve has had many highlights.

There have been illegal warehouses, festivals, ADE showcases with the likes of Parquet Recordings, Einmusika, Atomnation, Connaisseur Recordings, RISE and Suara Music, and many more intimate gatherings of the city’s electronic underground community. This Saturday, 18 November will celebrate its 4th year in De Marktkantine with a line-up with melodic live acts from home and abroad.

“…it is important to create a community”

Describe the original concept of La Reve and how (if so) it has evolved over the last 4 years?
We started organising parties because of our love for melodic techno music. We used to visit parties such as Pleinvrees and Next Mondays Hangover and got inspired by live acts like Worakls and Arjuna Schiks. When encountering the live acts of Hubert Kirchner, Reinier Zonneveld and Cliff de Zoete at illegal raves in Amsterdam’s tunnels, vacant office spaces and forests, we knew we wanted to give this sound a larger stage in the cities techno scene and the dream we called La Rêve was born. At our second event we invited heroes, Arjuna Schiks and Worakls and from there we managed to do events in at bigger locations with even greater artists like Stephan Bodzin, Dominik Eulberg, Oliver Schories, Aril Brikha, Chymera, Monkey Safari, Super Flu, D-Nox & Beckers and many more. In the last 4 years, La Rêve started evolve into a community rather than a event organizer, consisting of a dedicated group of ‘dreamers’.

Where would you say La Reve situates itself within the diverse and highly competitive Amsterdam nightlife scene?
I would say we are a small organisation, which focuses on creating intimate events in the melodic end of the techno spectrum. To keep our head above water in such a saturated market, it is important to create a community, which feels connected to our events. They form the base of La Rêve and make sure a small organisation, which consists of volunteers, can put up large but intimate events at locations like the Marktkantine and Thuishaven.

Can you pick out 3 of the most important moments in the 4 years of La Reve? What about a particular standout set?
1. The epic sit-down during the set of Worakls in a packed Dhoem Dhaam Warehouse was definitely one of our most memorable moments.

2. When we organized the first edition of Dagdromen Festival we had the bad luck that it was raining throughout the day. Everybody was soaked and already used liked 3/4 ponchos per person. Normally people in the Netherland will start complaining and probably go home, but this was something different. Everybody was connected and smiling despite of the bad weather. People kept dancing until the end. The live-set of Stephan Bodzin in the rain with lasers colouring the rain, was something we will never forget.

3. Our 2-year anniversary was an illegal rave at a vacant office space in Amsterdam west. All of our residents were playing that night separately and started a crazy B2B2B2B during the last hours. It was 09:00 am and rays of sun came through the glass ceiling when the last track started to play. What’s A Girl To Do from Fatimah Yamaha was a perfect closing of this one of a kind anniversary.

How do you see La Reve moving into 2018 and beyond?
In 2018 we would like to grow our community and create some of the best experiences we ever had. With La Rêve 4 Years we started cooperating with De Marktkantine, a place that feels like home for us. It’s really nice to work with the people behind this venue and we can’t wait to organise some big events here with our favourite artists. Next to these bigger indoor events, we will organize all nighters with some really cool artists once in every 2 months in the Sugar Factory. When summer returns we also return with our lovely La Rêve Festival at Thuishaven. The main goal is to keep our community really connected. Better rather than bigger is the motto for the future.

As the concept is founded by multiple people, describe how the three of you split duties “behind the scenes”? Do you ever find yourself at creative differences?
Because we are friends and already worked together for 4 years, we all know each other strengths and weaknesses. For example, Daniel is the one who handles with the venues, bookers and managements and will do all negotiations, but he is also really creative when it comes to decoration of the venue. It’s not like we have traditional management divisions because we are still doing this voluntarily, but everybody is responsible for a duty he is good at or enjoys doing.

On the other hand, what is it about the three of you that makes the team strong?
La Reve came to existence through our friendship and this is something we have been able to extend to the organisation. The group of friends has become bigger, but La Rêve is what brings it together. The nights of poster sticking and dreamcatcher making give us a reason to stay connected with one another. We find that strong relationships are the basis for good teamwork. 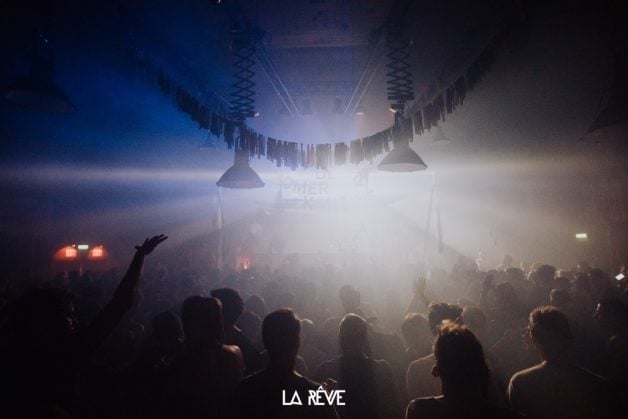