In the midst of the 2016 International Documentary Festival Amsterdam (IDFA), where some 500 films find their way to eyes and sales across Europe, Susanne Regina Meures “Raving Iran” is enjoying a particulalry fond response.

Currently ranked as one of the festival’s audience favorites, “Raving Iran” tells the story of Anoosh and Arash, two Tehran-based DJ’s at the center of the cities underground techno scene. Tired of hiding, the DJ duo organizes one last desert rave, but it does not come without the possibility of dangerous consequences. What happens next is a story of perseverance, creativity, and the kind of determination necessary to make it in this unforgiving world, increasingly overrun by censorship.

“Raving Iran” plays as part of the 2016 IDFA on Saturday and Wednesday, November 19 & 23. Here, I spoke to Susanne Regina Meures on the many challenges of making the film, bringing it into the dance music world, and more.

“Every aspect of making this film was a challenge.”

I’d like to start with the somewhat obvious documentary interview question: How were you first introduced to Anoosh & Arash? Were they the original subjects of your documentary, or did you conceive this film as more of an idea, with Anoosh & Arash introduced to you as relevant protagonists after the fact?
I read about techno parties in the Iranian desert in an English magazine and decided to make a film about the underground electronic music scene in Iran. I signed up on Facebook to look for possible protagonists and got in touch with dozens of young people, who are involved in Tehran’s music scene. A few weeks later I flew to Tehran and met many of them face-to-face. Everyone was excited about the project but, for obvious reasons, felt it was too risky to participate in the film. Anoosh and Arash were the only ones, who immediately said ‘yes’.

Also, what is your personal relationship like with “Techno” and electronic music in general? Are you a fan?
I really enjoy a good party here and there but I wouldn’t call myself a pro when it comes to “Techno”.

How was the atmosphere at the illegal desert parties? Had you ever been to Burning Man? If so, does it compare (I’d imagine not, as that event has pretty much become an elitist vacation)?
I haven’t been to Burning Man but I don’t think the events can be compared. (Apart from the fact that both are happening in a desert.) The parties in Iran are very small, very secretive, only a bus load of friends can be taken to the spots.

They’re less festivals rather than proper outdoor parties as we know them. However, the amount of time it takes to organise them is absurd … getting people together, a willing bus driver, equipment, fake permissions, bribes for the local authorities … here is a lot to think about but once the party starts, the anatomy of the party is pretty much the same as our parties over here. 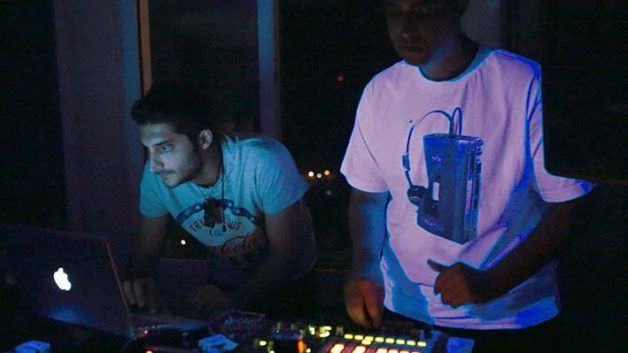 For you as a filmmaker, what was the most challenging aspect of completing this film? On the flip side, was there any element that you had anticipated being particularly difficult yet turned out to not be so?
Every aspect of making this film was a challenge. I was shooting without permission, travelling on a tourist visa, I had no place to stay, I couldn’t take any equipment, I didn’t speak the language, I had to find ways to hide and smuggle the footage out of the country…These were only a few but very essential hurdles, which I had to face. There were also plenty of problems on a day-to-day basis, especially the threat of the police and being found out.

On a positive note: I’ve received incredible help and support from everyone around me in Tehran. E.g. strangers who offered to host me, or offered to translate, drive and help me to find new equipment.
The support by the locals has been indescribable.

Again, speaking practically as a filmmaker, I see that film was partially funded by the Swiss Ministry of Culture. How did they receive your original proposal? How did you angle the film to the Cultural Ministry when pitching?
The film was intended to be solely shot in Iran and this is what I pitched to various film funds and the ministry of culture.

I can only judge their opinion by the financial support they offered. The funded the project, so they must have liked it!

If there is a single thing you would like people to know about the making (or idea) behind this film, particularly in the Western world, what would that be?
My intention was to give this young urban Iranian generation, which we know so little about, a face and a voice. Especially, as our idea of Iran is clouded by simplified media images, which makes it even more important to draw out the heterogeneity of the Iranian society.

Have you taken Anoosh & Arash on any gigs in Europe? If so, what has been your favorite one? Have you noticed an embracing from the worldwide electronic music industry of the two?
Very much so. Since the release of the film, Anoosh and Arash have been invited all over the place to play in clubs and at After Parties of the film. I really enjoyed our great premiere in Berlin but the boys were also really fond of Frankfurt, where they met Sven Väth and also their gig in Gent, in Belgium. I wasn’t able to participate but I could see they got amazing feedback.