2017 has been a stellar year for the Berlin based DJ producer Red Rack’em. Since his ‘Self Portrait’ album dropped in Feb, several well received mixes, world travels, remixes for Tensnake, Tinie Tempah & shows for Rinse have followed.

Last year, his ‘Wonky Bassline Disco Banger’ was a top seller at Juno and Phonica, and was played by pretty much everyone including Elton John. Now, Red Rack’em presents two more maximum devastators via his much loved Bergerac imprint in the form of ‘Place For Me (Version)/Exhalt’.

With the two track EP available soon, Red Rack’em brings his playlist of underground bangers that he always keeps close by. Spread across genre, everything from Drum n Bass to Afro Boogie is in this one.

Huge huge track for me over the years. Kaidi Tatham showing us why he’s the boss once again. Transcendental meditation bumping UK broken house grooves for 9am dancefloor meditation. It’s now 55 euros on discogs which is kind of interesting as it used to be 5 euros. Maybe my years of playing it helped? Maybe not haha but ones ego can dream eh…

My old friend Jimi Oh from Leicester gave me a copy of this many moons ago. He was in a duo called Wild Geese and they made a couple of records in 1994 which was when I was still at high school – so long ago! I hammered this all over the place which made Jimi really happy as it had been gathering dust for years. It’s now 68 euros on discogs and getting repressed by a US label I hear. So happy for Jimi as he’s finally getting props for this dope music! Ps – Jimi both my copies are worn out – any chance of another one please mate?

It’s pretty common knowledge that I am the worlds biggest Pepe Bradock fan ever. I even held a Pepe Bradock wine and cheese night back in the day in Nottingham where we listened to Pepe all night and quaffed plenty of French red wine. Now we all love the classics like ‘Life’, ‘Mandragore’ and ‘4’ but I am a sucker for the lesser known Pepe bits. This is a spicy, latin vibed broken roller with that typical thoughtful Pepe vibe. Pepe Bradock is jazz. Pure and simple.

Big ups to Justin Chapman and Volcov for this tasty brukked up number. Neroli always come with the good good. Anyone who wants a crash course into how to make interesting house music should listen to this track. I played this at Melt Festival this year and when the vocal came in there were cheers and whistles. Ruff. The thing with broken beat is – there was so much good house music within that scene as well. They could do it all.

I always loved Dev Paradoxs cut up super breaky jungle tunes and I own a few on Reinforced from back in the day. What I didn’t know then was he had also made some awesome house music with Volcov on Archive. ‘No Europe’ is a total hybrid tune – starts off total techno with confused synths and super funky bongos and then halfway through breaks into a hopeful sunrise latin tinged housey viber. I have played this many times in Berlin during those special 8-11am sets and it’s perfectly designed for that time of your life.

I am not a huge vocal house type of DJ. BUT in my quest to constantly re-invent myself (aka I get bored easily) I am starting to try a few bits out in my sets. ‘Men’ is a really well crafted song and I like the way Dana Stovall sounds like she’s singing from the heart. I picked it up recently in Love Vinyl in London and yeah it’s maybe a bit poppy but I feel like bringing the soul back a bit these days. Life has many ups and downs so I think going from some super underground Marcellus Pittman to something like this in a DJ set can amplify it’s little sunshine ray even more. ‘Men’ – exactly! I couldn’t agree more.

‘Gypo’ has always been big for me – I had to stop playing it but I think it’s due a revival. I have a test pressing and it just says ‘Bugz – Gypo’ on it – but of course it’s by Mark Force aka G Force. It’s funny how all the broken guys used to make Jungle. Domu was Sonar Circle, Nubian Minds was Alpha Omega, Seiji was….. Seiji. Unfortunately the version I have isn’t on youtube but you can get the gist from this I think. Mark Force is a genius producer – he can write the gnarliest stuff ever like this and then also come up with some super soulful, jazzy stuff as well. Check out his music.

Huge Masters fan right here. I actually don’t own so much apart from the obvious ones so it’s been great to pick up a few things I missed recently. There’s SO much to choose from. ‘Moonshine’ has been slaying it for me recently – I love hip hop. I love jazz. I love this vibe. For me this is up their with Pal Joey as like encapsulating that NYC thing of hip hop and house being willing bedfellows. It was a lot of the same people making both genres. Good music is good music. And music like this is timeless. If they don’t dance to this then just pack up and go home.

Speaking of Pal Joey…… what more can be said about his music? It’s the perfect collision of hip hop, soul, jazz and house music everytime. I think a night with Pal Joey and Masters music being played all night wouldn’t bore me at all. It’s so warm, positive and hopeful. He knows it’s not about making it bang. It’s about soul and vibes. Talking to people through the music. I really want to get into Pal Joeys music more so I will be making a concerted effort to play more of his tracks in my upcoming sets.

This was a bugger to find on youtube as I only have this on white label from back in my drum and bass days. So it’s kind of weird to find out it’s called ‘No Spaced Place’. A great example of the amazing music possible when people step out of their usual stuff and try something a bit different. Time lapse photography jazz funk vibes with super rolling cut up beats. The intro totally reminds me of Full Cycle but then it switches into some proper club wrecking bassline business. I actually partied with Nucleus in London for a whole night a few years back without realising who he was – was mad to find out at the end of the night as I bought a lot of his records! 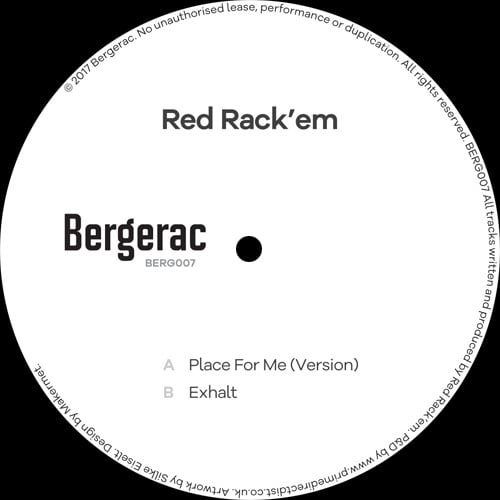